Actually, it wasn't really a plan. But it was a press conference. 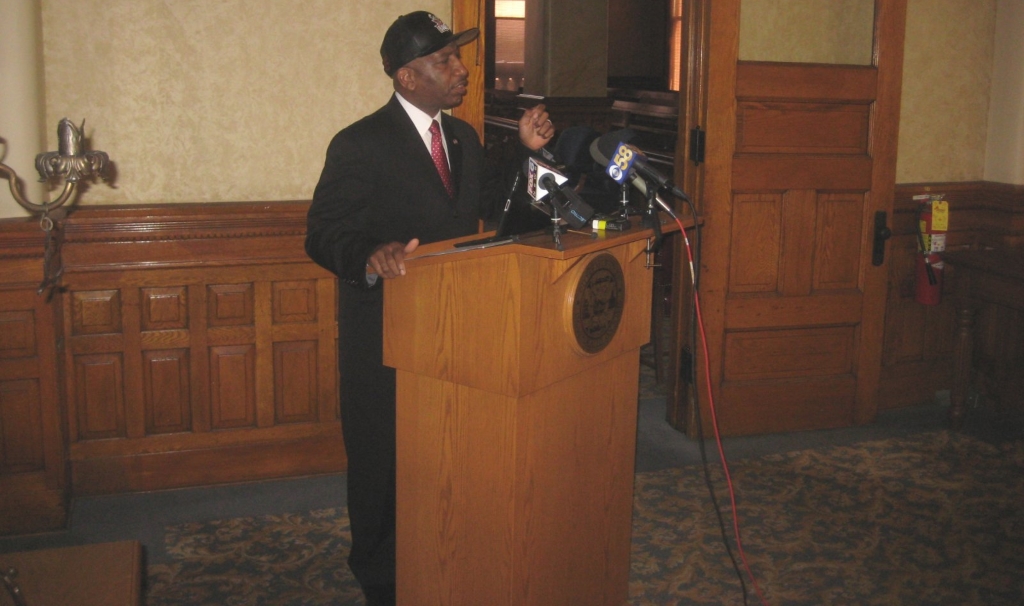 Mayoral candidate Ald. Joe Davis, Sr. has “not been privy to any discussions with the owners of the Bucks” regarding the team’s plans to build an arena, he says, but that did not stop him from holding a City Hall press conference on the matter today.

Davis feels he should be at the table with the billionaires, he says, due to the dignity of his position as Chairman of the Community and Economic Development Committee of the Milwaukee Common Council.

The committee is indeed a far-reaching one. “The Community and Economic Development Committee hears matters relating to community development, block grants, job development, business improvement districts, city public relations, industrial land banks and revenue bonds, emerging business enterprises, recreation, cultural arts and the library system,” it’s official description notes. However, the new arena plans will more likely be under the purview of the Zoning, Neighborhoods & Development Committee, the Redevelopment Authority of the City of Milwaukee, and the City Plan Commission.

The ZND Committee, of which Davis is not a member, “reviews issues relating to city development, zoning, historic preservation, incremental tax financing, building codes and housing projects.” Davis is also not a member of RACM or the plan commission, and it is not likely that Mayor Tom Barrett, whose office he covets, is likely to appoint him. If Davis would like to serve on the ZND committee, or have hearings on an arena scheduled for his, that matter is up to Council President Michael Murphy.

But in his prepared remarks, entitled, “New Arena = Economic Growth, Development, and Leadership,” Davis made it clear that he is prepared, if not indeed destined, to play a critical role in the project, even if the necessity of his leadership is not as readily apparent to others. Addressing the twelve people in the Council Chambers Anteroom he said, “As I stand before you all, I am envisioning a thriving downtown, and a stronger Milwaukee, and my purpose is to lead the way.”

Davis-as-Outsider seemed to be the theme of his remarks.

“During the city’s 2015 budget debate, I proposed an amendment that would have created $100 million in bonding authority towards the new arena. I believe that if the amendment had received the support it needed, the approval would have put us in a very good position of meeting our financial obligation.”

Davis was referring to a plan he announced last August. “Let me be clear,” he said then, “this initiative would not designate a single dime to be used for a new arena. It would simply give the city the flexibility to pursue that option later in the 2015 budget year if leaders see fit. …

“I’d call this a municipal franchise fee, because in the end, an entertainment district and professional sports team benefit the community with unmeasured local and national media attention and credibility.”

But during the council’s budget meeting, Davis later moved that his amendment be withdrawn. That motion received the unanimous support of the council members, himself included.

So why did he call the press conference Wednesday? “I call this press conference today simply to commend the leaders behind the development of the new Multipurpose Arena for the Milwaukee Bucks!,” his written remarks read.

Davis says it is time for the city leaders to “show our commitment … to keep this coveted franchise” in Milwaukee.” He figures $50 million ought to do the trick.

Why would his plan work now, when it didn’t last time? he was asked.

Davis explained that back then the Milwaukee Metropolitan Association of Commerce was working with the state to secure its support. “And now that the Governor has stepped up to the plate,” with his funding scheme, the city should do the same, he suggested. “Hopefully we, the city, will commit to a defined contribution to help the Bucks do it their way.”

“I don’t think we should move this forward with hypotheticals,” he said. It’s time to “get a funding mechanism.”

Davis did not articulate any specifics for his funding proposal. He had earlier rejected an idea for a “Super TIF” districts, since he said it would never receive suburban support. Plus, (no surprise) the mayor’s not keeping him in the loop.

So, what is his message? “My message today is that there is a time and a place for various development projects in the city. … Leadership is crucial to that and we have to be able to rely on those we elect to make smart decisions.”

The facility Davis envisions will be a “state-of-the-art multipurpose arena, featuring retail and living space. … It’s a draw for talented professionals interested in living and working in a city with potential such as Milwaukee, it will create new jobs and it will help revitalize our downtown by facilitating business activity, attracting major events, and generating revenue to fund other catalytic development in the city,” he said.

Why, those are the same arguments used by streetcar supporters! And, wouldn’t an arena be connected to a streetcar line under any rational development plan?

But when asked if a streetcar funding mechanism would be part of his arena plan (Davis favors a site at N. 6th St. and W. McKinley Blvd., although the site just north of the Bradley Center, he added, “would be catalytic for the Park East and Downtown”), Davis appeared never to have considered the possibility — nay, the inevitability — of an arena – streetcar link.

“Let’s separate the streetcar [issue],” Davis said, although he disparaged it twice in his speech. “The arena is an example of a strong investment at this point in time, as opposed to the streetcar project which required appropriating money from other tax incremental districts such as TID 49 (Cathedral Place) which was intended to expire. But now that the streetcar project has been tentatively approved, let’s proceed cautiously in a way that is fiscally responsible for the tax payer.”

It might be argued that the way to be”fiscally responsible for the taxpayer” would be to have a new arena connected by streetcar to the thriving downtown it supposedly will help create. The Barclays Center in Brooklyn [2012], the sport’s newest arena, is connected to rail transit, but, that’s New York for you! Nice place to visit. But we could add that the Amway Center in Orlando, Florida [2010] is located at the Church Street Station of SunRail, the Time Warner Cable arena in Charlotte [2005] is on the Lynx Rail System, the MATA trolley serves the Fed Ex Forum in Memphis [2004], the Toyota Center in Houston [2003] is on that city’s Red Line, the Chesapeake Energy Center in Oklahoma City [2002] has a streetcar project underway.  The DART rail serves the American Airlines Center in Dallas [2001], and the American Airlines Center in Miami [2000] is also on a rail stop.

So, of the nine basketball arenas built in this century, eight have rail service, as will Milwaukee’s. The one exception is in San Antonio.

But Davis, ever the outsider, is clearly not getting aboard that train.