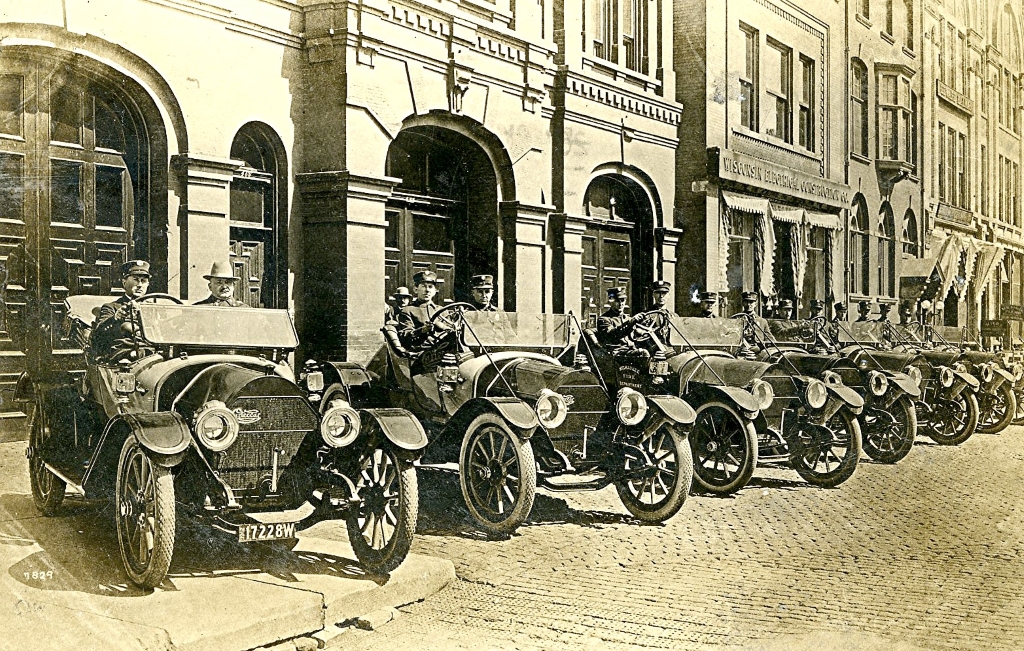 Engine House One, located on Broadway, with its fleet of Cartercars, 1912. Image courtesy of Jeff Beutner.

In the early 1900s Milwaukee was quick to utilize the horseless carriage, although electric streetcars were the preferred mode of public transportation at the time. This photographic postcard dates from 1912 and is of the Milwaukee Fire Department’s Engine House One. A replacement building is on the same site on N. Broadway located just north of the Milwaukee Athletic Club between E. Mason and E. Wells streets.

The department first formed as a volunteer organization in 1837, evolving into a full-time service by 1874. Engine House One was created in 1872.

At the time of this photo there were many automobile companies in business. These are the battalion chief’s brand new Cartercars. The Cartercar was not long-lived. The company was founded in Jackson, Michigan in 1905, moving to Detroit in 1906 and a year later to Pontiac. In 1909 it was sold to General Motors mainly because of its novel, friction-drive transmission. It became a division of GM, but didn’t last long after this photo. GM hoped to sell 1,000-2,000 Cartercars per year, but the sales were disappointing. GM closed this division in 1915 and Cartercars quickly became antiques.

Over the decades Engine House One has primarily responded to fires in the downtown area, but has also been called to other fires. “They were first on the scene for the O’Donnell Park tragedy,” WTMJ radio has reported. “They were at the Pizza Man fire and the Falk Corporation Explosion in 2006. They responded to the plane that crashed in Lake Michigan carrying six people and several transplant organs.”

As the city’s oldest engine house, it has also had the highest number of Milwaukee firefighters who have lost their lives in the line of duty: 15 in all, the story noted. That includes James Foley, one of the first Milwaukee Fire Department Chiefs. Chief Foley, along with three other firefighters, Captain Andrew White, Pipeman Thomas Droney and Truckman Edward Hogan, “suffocated while sleeping in their beds at Engine House One,” TMJ reported. “They had responded to an acid spill where they inhaled toxic fumes on February 3rd, 1903. According to one story, Chief Foley bet his men $100 that he would not live through the night. Unfortunately, he won.”