70 local bands and 15 visual artists at 15 venues over three days in a benefit for school arts programs.

Since moving back to Milwaukee in late 2013 and writing for Urban Milwaukee I’ve had the opportunity to see lots of prominent national/international artists at top venues in town. Lately I’ve been digging into the local music scene, frequenting more intimate spaces where hungry musicians are developing their sound and identity. From what I can tell the scene is the best it’s been in a long time. That feeling has been echoed by friends, artists and publications who’ve followed the scene for years.

When the lineup was announced for a new benefit festival, Arte Para Todos, which happens this weekend, I couldn’t believe how stacked it is. There will be 70 bands performing alongside 15 visual artists at 15 different venues in three neighborhoods over three days. Damn near every Milwaukee act worth a damn is contributing their time and talent to this festival. If there was ever a time to sample our burgeoning local music scene (and support a great cause), this is it.

Arte Para Todos translates to Art For Everyone. All of the proceeds from the festival will be split between arts programs at La Escuela Fratney, Bay View High School and Tamarack-Waldorf High School. The festival is split up by neighborhoods, with events in Bay View on Friday night, Riverwest on Saturday and the East Side on Sunday. This structure makes for maximum sampling, as each night’s venues are within walking distance of one another and a $20 wristband gets you access to the entire festival. I sat down with one of the head organizers, Josh Evert (of The Fatty Acids and Jaill), for a conversation about this ambitious festival to benefit the arts in Milwaukee schools.

How did the idea for the festival develop?

I went to Chuck Watson of Made in Milwaukee last year. He and a few others started Bay View Gallery Night, which has turned into an institution for the businesses in Bay View. He also took over the Summer Solstice festival. He kills it on that. Him and a friend started the TEDx chapter in Milwaukee too.

One of the topics that was brought up at that first TEDx conference was that so much focus in education is put on STEM (science, technology, engineering and mathematics), but they were talking about bringing the arts back into the core. I don’t want to politicize Arte Para Todos, but the reality is that after Act 10 arts in Milwaukee Public Schools were drastically defunded.

We talked to the arts director at La Escuela Fratney and she has kids that are failing in other subjects who come into art class and are the leaders. Other students look up to them. This is not something that we can just say is optional and we’re going to cut it.

When I originally went to Chuck the event was going to be a one-time deal before the November election, to make a statement against the direction our state is heading in. But that wouldn’t have helped. So Chuck and I brainstormed for months, trying to figure out what we could do, what could make a splash, and what would be sustainable and repeatable. Our vision expanded and we came up with the formula for Arte. I’m grateful I had Chuck as kind of a guru. He helped us keep it pragmatic, so we weren’t giving our money to some bureaucracy where people have no idea where the funds actually end up. We are literally cutting checks to the arts directors in these schools.

How did you pick the schools to support?

This year we’re working with the schools that agreed to talk to us. But in the future I’d like to get into some schools that literally have no arts programs and try to build something from the ground up. We’re hopefully going to be supporting these schools for a while.

It’s really cool how the festival is split up by neighborhoods each day.

I was super inspired by Riverwest Fest, which my friend Kelsey used to co-book. That’s kind of the same system; do the day pass, charge for a wristband, let anyone go to any venue they want. We turned it into three neighborhoods because we want this to be about getting out and maybe going to a place you haven’t been.

Maybe Riverwest people are a little isolationist, maybe Bay View people are a little isolationist. Get out of your neighborhood. Being the eternal optimist that I am, my hope is that some venues will be at capacity and people will check out bands they may not be familiar with. And we tried to have a mix of genres on each bill, so the bands themselves will be exposed to fellow acts they might not be aware of.

Hopefully down the road we can involve some neighborhoods that aren’t the cliche hip spots. We really wanted to involve Harambee and that’s going to be a goal for the future. It just kind of made sense from the start.

Our buddy Myles did a festival called Bread Fest with his crew, which was kind of the same model. So we knew Milwaukee is capable of this. Compiling the list of bands was kind of crazy. We got to maybe half of the artists that were on our list before we were like, oh shit, this is like 70 bands. I can’t say for certain that this is like a stronger scene than when I moved here, but I think it’s getting pretty big.

Who else helped organize and book the festival?

I’ve been working with Amelinda from Altos, who has a new project called Nightgown. We have Johanna from Calamity Janes, New Boyz Club, Airo Kwil. Kiran from New Age Narcissism and WC Tank have been helping out with booking. My friend Matt helped out a little bit too. This is literally an artist curated festival. We just put our favorite bands on a list and started emailing them. Everyone was into it. Christopher Porterfield was into it and he’s probably insanely busy.

I think people know what’s going on with education in the city and want to be a part of the solution. To me an artist is someone who starts a conversation. That’s really what this is about more than anything. If people start talking about what is happening in our schools, where there’s been a 90 percent cut in arts funding, that’s what this is really about. The money we raise is important, but what’s more important is the conversation. And the amount of artists that have signed on to this stands for itself, as to how important this is for the city.

Arte Para Todos takes place February 27 – March 1. Single venue tickets are $7, day passes are $12 and the entire weekend is $20. For more information on the festival and to listen to the musicians performing visit www.arteparatodos.me. 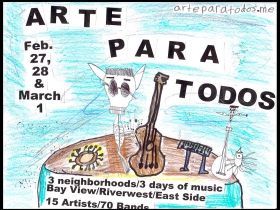 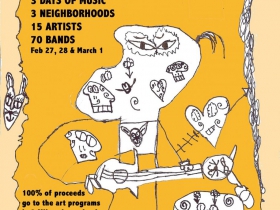 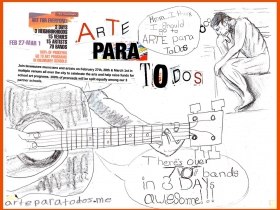 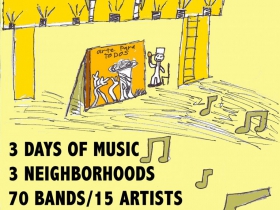 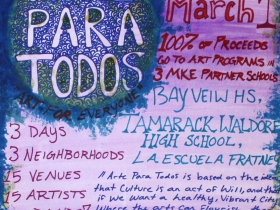 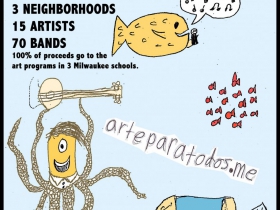