Crunching the numbers: How has Wisconsin’s economy fared in his first four years?

As Governor Scott Walker starts his second term and pursues the Republican presidential nomination, it’s a good time to assess his economic record in his first four years. Was the impact positive, negative, or too small to be measured?

Let’s start with job growth. The governor’s official web site essentially blames his predecessor for the Great Recession and takes credit for the national recovery since. It begins by saying, “In the four years before Governor Scott Walker took office, Wisconsin lost nearly 134,000 jobs and, at the low point, unemployment topped out at 9.2 percent.” 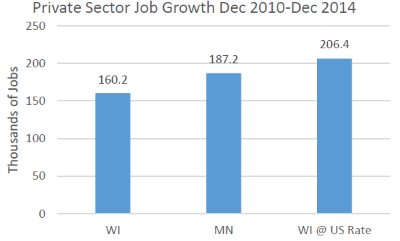 No mention is made of the number of new jobs added since then, perhaps because that would have drawn attention to candidate Walker’s promise to add 250,000 private sector jobs in his first term.

The chart to the right shows Wisconsin fell about 90,000 jobs short of the goal. Wisconsin added about 160 thousand jobs, lagging its neighbor Minnesota (187 thousand jobs added) a state with a slightly smaller population. The chart also shows the number of jobs (more than 206 thousand) that would have been added if Wisconsin’s growth had kept up with the US as a whole. 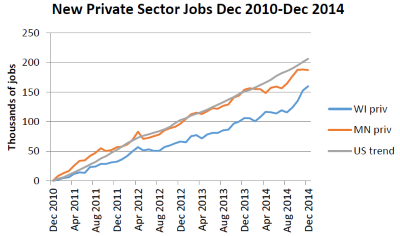 Despite starting with a somewhat larger base of jobs than Minnesota, Wisconsin added fewer jobs throughout the four years, as shown in the next graph. It is unclear at this point if an apparent last-minute surge will succeed in appreciably narrowing the gap.

The next chart compares Wisconsin’s job growth rate from December 2010 to December 2014 to that of Midwestern states and the U.S. Unlike the previous figures these include local, state, and federal government jobs. Wisconsin lags growth in Minnesota, Michigan, and Indiana, and the nation as a whole. It leads Illinois and Ohio and is essentially tied with Iowa. 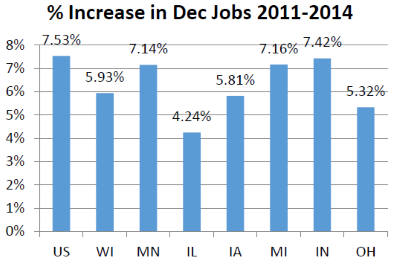 The following chart shows percentage increases in jobs for Wisconsin and its neighbors over the four-year period. Somewhat surprisingly, for the first two-and-a-half years Wisconsin ran neck and neck with Illinois in the contest for last place. This is surprising because during this period Illinois has had an ongoing battle to do something about its employee pension plan, the most underfunded in the nation, leading to tax increases. Wisconsin, by contrast, has the best-funded state pension plan, which Walker wisely decided not to mess with. 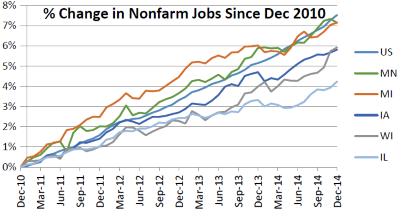 More recently, Wisconsin broke away from Illinois and moved upward to challenge Iowa for third place in this group. For much of the period, Minnesota and Michigan added jobs at a faster rate than the average state, but have since fallen back. A large part of Michigan’s job gain is likely explained by the recovery of the auto industry.

Because of the meltdown of the auto industry, Michigan suffered by far the largest unemployment rate in the Midwest. By contrast, Wisconsin, Minnesota, and Iowa entered this period with unemployment rates well below the national average. 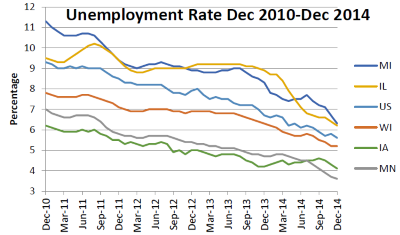 By the time Walker took office, the 9.2 percent unemployment rate quoted on his web site had actually dropped to 7.8 percent, a decline of 1.4 percent in just a year. During the next four years under Walker Wisconsin unemployment dropped another 2.4 percent. The governor’s wording seems aimed at leaving the casual observer with the impression the full drop from 9.2 percent should be attributed to Walker. A report from the Wisconsin Manufacturers and Commerce repeated this misleading claim.

As the chart shows, Wisconsin’s unemployment rate has not dropped as rapidly as those of its neighboring states or the national average. As a result the national rate has been closing the gap with Wisconsin’s. 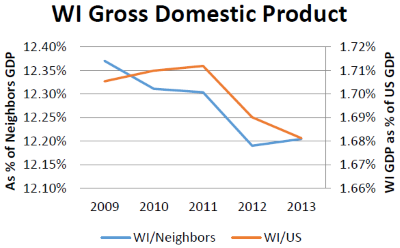 So job growth and gross domestic product has lagged, as has the decline of unemployment, under Walker. But perhaps Wisconsin can look forward to an entrepreneurial explosion. The governor’s website reports “new business formations at pre-recession levels.” This theme is taken up by the Wisconsin Taxpayer’s Alliance (WisTax) report on Governor Walker’s State of the State speech. After comparing Wisconsin job growth with that of its neighbors, WisTax adds, “other key economic measures tell a somewhat different story. In recent years, private firm creation, which can lead to future job growth, has been stronger here than elsewhere.” 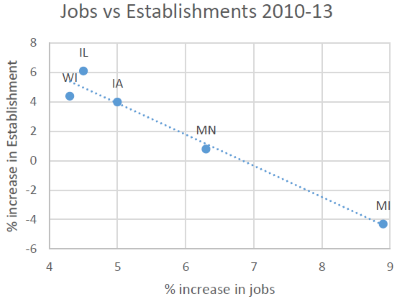 That sounds encouraging, but one must be careful in interpreting economic data. When people are out of work they don’t sit on their hands. They look for alternatives. One alternative is to set up a business, anything from consulting to hairdressing. Some of these businesses will become profitable and continue after the recession ends. Many more are likely to disappear once jobs return.

The chart to the right plots WisTax’s figures for the percentage increase in “establishments” or new businesses against the increase in jobs for Midwestern states. The negative correlation between the two is almost perfect (-.97). The more jobs created in a state the fewer new businesses created and vice versa. But the statistics also suggest that many of the new establishments disappeared when the proprietor got a job.

To summarize, during Walker’s first term, Wisconsin’s economy underperformed that of the average state and the majority of Wisconsin’s neighboring states. Even data that, at first glance, might point to exceptions—such as the growth in new businesses—may on closer examination simply reflect Wisconsin’s relative weakness. (It is important, however, to be cautious in interpreting this conclusion.)

This overall conclusion does not by itself prove Walker’s policies did not help the state economy. Perhaps Wisconsin would have performed even more poorly under a different set of policies. Lacking the ability to test a counterfactual scenario—for example, being able to create an alternate universe in which Democrat Tom Barrett was elected governor four years ago and watching what happens—the question can never be answered completely. Perhaps Wisconsin had underlying problems that would have made the situation much worse in the absence of the governor’s policies.

Maybe there is something inherent about Wisconsin and its business community that explains the mediocre economic performance. A lack of entrepreneurial spirit and too much risk aversion perhaps. Or maybe Wisconsin simply suffers from the wrong mix of businesses—those in sectors that are suffering national and global decline.

In the next article, I plan to look at other states whose governors successfully advocated policies similar to Walker’s. This may shed light on whether the Wisconsin record was an anomaly.