Controversy Over Assembly Members Per Diems

Is the 56% increase in legislators' daily expenses "outrageous" or overdue?

By Bill Lueders, Wisconsin Center for Investigative Journalism - Jan 28th, 2015 11:08 am
Get a daily rundown of the top stories on Urban Milwaukee 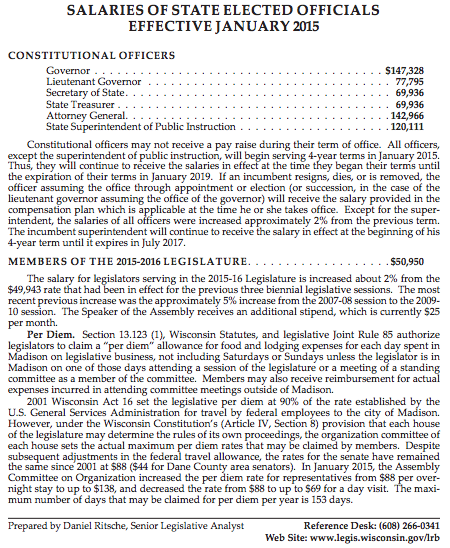 A Legislative Reference Bureau analysis of compensation for state elected officials was recently updated to include the new per diems.

In 2012, state Assembly leaders proposed raising the per diem payments for members who come to the Capitol on official business. The idea drew fire — one conservative blog called it “dumb, dumb, dumb” for lawmakers to “jack up their own pay” while pushing austerity elsewhere — and was quickly dropped.

But in January, the Assembly swiftly hiked these payments for lawmakers who travel to Madison and stay overnight, from $88 to $138. That’s a 56 percent spike in these payments, provided whether or not expenses at this level are actually incurred.

Not surprisingly, as before, the reaction from some quarters was harsh. In a letter to the editor in the Milwaukee Journal Sentinel and Wisconsin State Journal, Oak Creek resident Wayne Meyer called the higher per diems “unconscionable,” saying it “borders on criminal.”

“It’s outrageous that the first item of business they took up is lining their own pockets,” Rothschild says. “These are the same legislators who are so hostile to increasing the minimum wage and so eager to make people on food stamps get drug-tested.”

The measure passed an Assembly committee, which is all that was needed to take effect, on Jan. 8, the day after it became public. The vote was unanimous, with the committee’s five Republicans and three Democrats joining in a rare show of bipartisanship.

Per diems are no small expense. In the past two-year session, state lawmakers claimed nearly $1.9 million in these payments. This averages out to more than $7,000 per lawmaker per year. These payments are on top of salaries, which have also just increased for members of the 2015-16 Legislature, to $50,950.

But there is an “on the other hand,” starting with the fact that per diem rates and legislative pay have remained stagnant in recent years.

While a few states have no per diems, about three dozen pay more than $88, and half of those top $138, according to the National Conference of State Legislators.

Given that the per diem is meant to cover all expenses, from food to lodging to travel costs, the $88 payment might fall short of actual costs. One downtown Madison hotel, for instance, offers lawmakers a special rate of $89 a night.

Rothschild, for one, is unmoved, saying cheaper rooms are available on East Washington Avenue, a Madison main artery: “I don’t think it would kill the legislators to drive five miles out on East Wash and get a hotel room, like normal people do.”

Assembly Speaker Robin Vos, who claimed more than $19,000 in per diems in 2013-14, has said the changes were tailored to be “cost-neutral.” While the level of reimbursement increased for those who stay overnight, it fell from $88 to $69 for those who don’t. Assembly Minority Leader Peter Barca, D-Kenosha, called the new rates “more equitable.”

Curiously, per diems for members of the state Senate remain at 2001 levels: $88 a day for lawmakers outside of Dane County, $44 a day for the rest.

Myranda Tanck, spokeswoman for Senate Majority Leader Scott Fitzgerald, R-Juneau, said members there did not raise a concern about the current rates. She noted that “Assembly session days have tended to span later into the evening on a more regular basis than (those) in the Senate, requiring more frequent overnight stays for some members in that chamber.”

10 thoughts on “Controversy Over Assembly Members Per Diems”