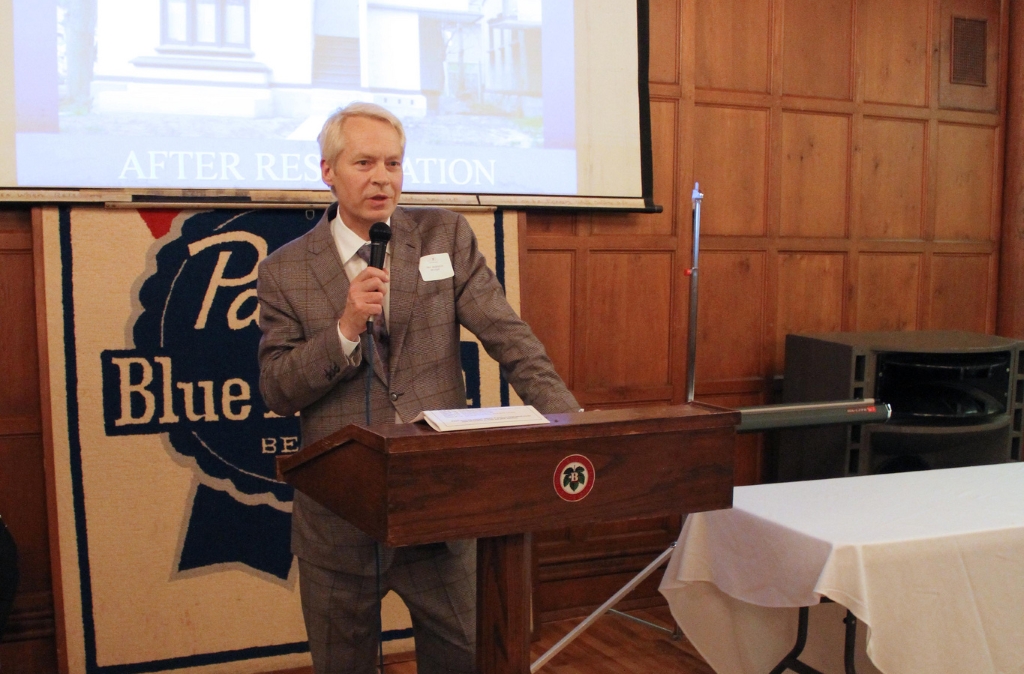 Ald. Bob Bauman says he thinks the city needs to act promptly to have an experienced person staff the City of Milwaukee Historic Preservation Commission, even on an interim contract basis until a full-time replacement could be found for Paul Jakubovich, who died in December.

The preservation officer helps the Common Council on historic preservation issues, and is responsible for issuing Certificates of Appropriateness for changes to historic building exteriors, and certain development in designated Historic Districts, among other responsibilities. With the increased interest in development in older Milwaukee neighborhoods, including the Historic Third Ward, Walker’s Point, Bay View and elsewhere, Bauman feels it would be best to have somebody in the job as soon as possible.

The 4th District alderman, who was re-elected to a year’s term as the Chairman of the Third Ward Architectural Review Board on Wednesday, said a search for a full-time replacement would likely involve a nationwide scope, and could take the better part of year.

Jakubovich had a large impact on historic preservation, as I’ve written.

He was familiar with the history of the city, the players involved, the politics and procedures at City Hall. “Plus, he could draw you a plan, if you needed one,” Bauman said, referring to Jakubovich’s ability to provide solutions to historic development conundrums.

Following a 16-year career as chief planner for Milwaukee and then for Denver, Peter Park is donning academic robes as he has been appointed Design Critic in Urban Planning and Design at the Harvard Graduate School of Design. Park led the citywide revisions of zoning codes in Milwaukee and Denver, opening both up to higher density, transit-oriented development. In Denver, he actually succeeded in seeing transit-oriented development occur, while it is still in its hypothetical state here. He also teaches at the University of Colorado in Denver, and cites his success in the removal of the Park East Freeway here as among his professional accomplishments. Some Milwaukee real estate developers still miss Park, contending the Department of City Development has never truly replaced him.  Park formerly taught at the UW-Milwaukee School of Architecture and Urban Planning, as did his Harvard colleague Grace La, whose husband James Dallman still teaches here at UWM.

Architect James Shields of HGA gave a presentation to members of the Brady Street business community last Monday (January 12th) at Regano’s Roman Coin. The meeting was closed to this reporter when Teri Regano shooed him away, but a view through the plate glass windows of her old Pabst tavern showed Shields discussing plans for the redevelopment of the Gallun Tannery, a monster 5.7 acre riverfront property that runs upstream of the Holton Viaduct for 1,047 feet along the east bank of the Milwaukee River.

Shields proposes 450 units in four “U” shaped buildings with public access to the riverwalk which would be developed on the site. There would be no internal streets on the site, which presents challenges. Among them is a 20 foot or more vertical drop between the height of N. Water St. and the level of the property below. The Atlanta-based developer for this project hopes to seek city approvals early this year, with work to be begun in the spring…

Further east on Brady, the vacant “Favela House” at 1695 N. Warren Ave., adjacent to the Nomad World Pub, has had its plumbing abandoned, and its siding and electrical service removed. The home, known for its brightly painted north wall that faced the Nomad’s impromptu World Cup Beer Garden last year, was purchased by Nomad owner Mike Eitel for $165,000 last May. When the building is demolished, the land could provide for a useful expansion area / beer garden for the Nomad…

Meanwhile, a $200,000 addition and alteration is underway at Jo-Cat’s Pub, 1311 E. Brady St. Several dump loads of debris and construction material have been hauled from the second floor of the tavern. Just another example of the ongoing upgrades occurring on Brady Street.

One thought on “Plenty of Horne: Who Will Replace Paul Jakubovich?”