Walker Not Most Polarizing Pol

Polls show he is fourth most polarizing among state voters. 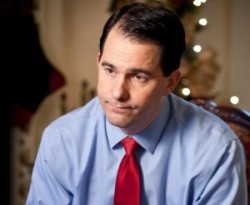 On Dec. 20, Gov. Scott Walker posted this on Twitter: “Just put angel on our tree in Wauwatosa.” He included a picture of the angel atop the family Christmas tree. Within seconds, obscene comments poured in.

The incident reinforced the image of the Republican governor as the most polarizing politician in Wisconsin. Walker’s opponents say he divided the state in 2011 with his Act 10 repeal of collective bargaining by public employees.

But, according to Marquette University pollster Charles Franklin, Walker is not the most polarizing politician in Wisconsin. In fact, Walker ranks fourth, Franklin says.

After digging through years of Marquette University Law School polls, Franklin explained: “There are several ways to look at polarization, but one intuitive way is through party unity. A polarizing politician would have high support within their party and high opposition from the other party.

“That is high, but ranks Walker fourth in the state behind Barack Obama (91.5 percent), Mary Burke (91.5 percent), and Paul Ryan (91.0 percent),” Franklin adds. Burke was the Madison Democrat who got 47 percent of the vote for governor on Nov. 4.

Franklin concedes that “the differences among this group are quite small, reflecting the overall level of polarization.”

All this means that Walker – fairly or unfairly – is the symbol of political polarization that has been growing statewide over the past 20 years. “Party-line voting has increased as have the number of lopsided wards throughout the state,” Franklin explains. “The conflict over Scott Walker and Act 10 and the recall reinforced that polarization though it did not single-handedly create it, either.”

In an interview with WisconsinEye, Walker also said he is not the most polarizing governor in Wisconsin history. Walker said he’s been able to work with Democrats on some issues in his first four years in office, although he didn’t offer any examples.

And, when he served in the Assembly from 1993 until 2001, Walker said he would give new legislators this advice: “Don’t personalize your differences, because your opponent today may be your ally tomorrow.”

He said he’s been unfairly called polarizing because he has achieved many of the changes that he promised to make when he ran for governor in 2010.

“There are people who dislike the fact that I’m willing to do the things I said I would do who try to polarize things,” Walker said.

National union leaders, and other special-interest groups, pushed for him to be recalled in 2012 and made him the “No. 1 target” in the Nov. 4 elections, the governor added.

Walker was also asked why so many of Wisconsin residents answering Franklin’s polls have offered the governor this advice: Don’t run for President. In the Oct. 9-12 Marquette Law School poll, for example, 69.8 percent of 803 respondents said Walker should not run for President; 25 percent encouraged him to run.

Smiling, the governor said some of those offering “don’t run” advice think he’s doing a good job as governor and don’t want him to leave that job.

That’s why popular mayors sometimes can’t get elected to the Legislature, the governor noted.

Being a successful elected official is a “mixed blessing,” Walker said. Why? “If people like the job [you’re doing] – county executive, governor, mayor, whatever – sometimes people don’t want to lose you from that position. It’s not a matter of not liking you running for that [higher] office, but not wanting you to leave.”

Steven Walters is a senior producer for the non-profit WisconsinEye public affairs channel. Contact him at stevenscwalters@gmail.com

3 thoughts on “The State of Politics: Walker Not Most Polarizing Pol”