By Molly Rippinger, Milwaukee Neighborhood News Service - Jan 19th, 2015 09:02 am
Get a daily rundown of the top stories on Urban Milwaukee 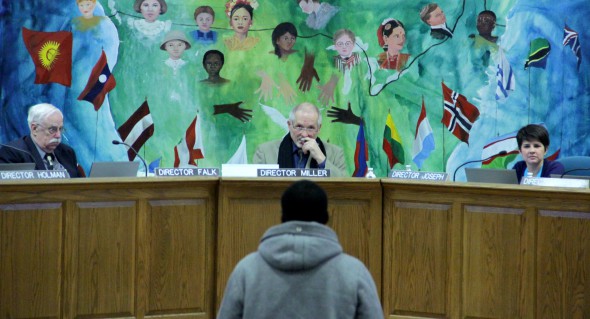 Members of the school board listen as a student provides testimony on behalf of a charter school. (Photo by Molly Rippinger)

The terms of five members of the Milwaukee Board of School Directors end in 2015, meaning the nine-person board has the potential for new faces come April.

“We’ve got really well-meaning, smart people on the board,” noted Spence, who has served on the board since 1999, making him the most senior member. A board member can serve an unlimited number of terms. He added that the members try to find common ground to improve outcomes for students. 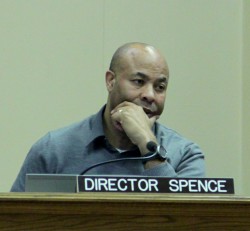 “I sincerely believe that anyone who runs for the school board has to do it from the perspective of really caring about this community and what happens for young people,” said Spence. “It takes a special individual to be willing to put themselves out there for something that doesn’t get a lot of praise, but often gets a lot of ridicule.”

Wendell Harris, Sr., vice chair of the Wisconsin NAACP and an active volunteer with area youth, is challenging Spence for the District 2 seat. “Milwaukee’s schools are our city’s future,” said Harris, who said that the public deserves to have a greater say in the policies and actions of the school system.

District 2 stretches across the northwest Milwaukee, covering neighborhoods such as Washington Heights and Sherman Park.

According to the Wisconsin Association of School Boards, legal qualifications for becoming a school board member include being a United States citizen, at least 18 years of age and a resident of the district for at least 28 consecutive days at the time of declaring candidacy. The candidates were also required to collect the signatures of at least 400 registered voters from their district to complete their nomination papers.

Holman, who represents District 8, is the only incumbent not seeking re-election. Carol Voss, a marketing director and mother of two Milwaukee Public School (MPS) students, declared her candidacy in early December as the sole candidate in the district.

No candidates entered the race for District 1 or the at-large seat, thus securing the seats of Sain and Falk for another term.

According to the Office of Board Governance, the main function of board members is to formulate and adopt policies and to approve budgets during their four-year term.

Board members are paid $18,121 annually, except for the president, who receives a yearly salary of $18,667. According to Eugene Jones, assistant board clerk of the Office of Board Governance, salaries for board members have not increased since 2000.

The board election will be held on April 7, and board members will take office on April 27.