The 2014 race and its total of $60 million in campaign donations, won't be repeated, he assures reporter.

By Bill Lueders, Wisconsin Center for Investigative Journalism - Jan 6th, 2015 01:57 pm
Get a daily rundown of the top stories on Urban Milwaukee 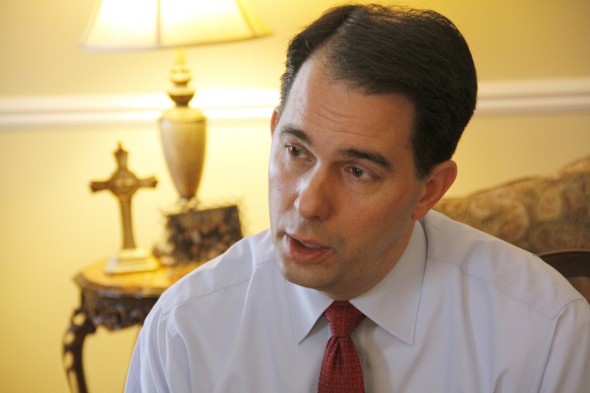 This, too, shall pass.

That, in a nutshell, is Gov. Scott Walker’s prediction regarding the vast sums spent in the recent gubernatorial elections. He doesn’t expect it to keep happening.

“I think if we don’t have outside groups involved in the next election, four years from now, whether it’s I or somebody else running, you’ll probably have a much, much lower amount spent, probably closer to what we had in the past,” Walker said in a Dec. 30 interview with the Wisconsin Center for Investigative Journalism.Total spending in the race between Walker, a Republican, and Democratic challenger Mary Burke likely topped $60 million. That shatters the previous record of an estimated $37 million for a regular midterm race, set when Walker was first elected in 2010, but falls short of the estimated $81 million doled out on the 2012 recall election.

Walker, a possible presidential contender, says this extraordinary spending owes to extraordinary circumstances. Besides the opposition he faced from national labor unions, “I had President Obama, President Clinton, the entire Washington infrastructure in here making me their No. 1 target in America.”

Absent these factors, “my guess is, at least in the gubernatorial election, I doubt you’re ever going to see something that high again.”

Both Walker and Burke benefited from millions of dollars in outside spending, some of it “dark money” from unknown donors. In direct contributions, Walker raised about $26 million to Burke’s $16 million, going back to when she entered the race in October 2013.

Assembly Speaker Robin Vos, R-Rochester, has called for changing state law to let businesses donate directly to political parties. Currently in Wisconsin, corporations cannot donate to candidates or parties, but some fund outside groups engaged in election-related advocacy. Vos, speaking to WisconsinEye, pitched direct giving as preferable because “it’s transparent, it has to be disclosed to the public, it’s all available online.”

Walker, however, is cool to this idea.

“I have no interest in going down the path of other states” that allow corporate contributions, he said, citing Illinois as an example. “I don’t see a direct benefit in that.”

The Legislature is also likely to make a fresh effort to raise contribution limits for candidates and parties. But Walker said “we were able to do just fine” in the last election, in which individuals could give no more than $10,000 to his campaign.

In fact, he noted, reciting numbers from a campaign press release, more than 70 percent of his donations in the last reporting period were from people giving $75 or less. His representation is correct, in terms of the number of donations. But these smaller sums accounted for just 14 percent of the total amount raised by Walker’s campaign during this period, while donations of $500 or more made up 64 percent.

Keeping track of such data is part of the sprawling mission of the Wisconsin Government Accountability Board, charged with overseeing state campaign finance, elections, lobbying and ethics laws. The agency begins the new year with a bullseye on its head — figuratively but also literally, in that Vos has declared its director, Kevin Kennedy, “must go.”

Walker, following an audit report that identified problems with the agency’s performance, has said he is open to changes in how the board operates. He remains noncommittal as to what those changes might be — whether to retain the board’s existing structure, return oversight of its functions to partisan appointees or try “something completely new and different.”

Asked about GAB chair Thomas Barland’s recent comment that no one from the Legislature “has contacted me before making public calls for changes in how the board operates,” Walker agreed that the state should solicit input from current and former board members.

That may already be happening. Barland, who praises Kennedy, says he’s since had “informative and congenial” meetings with two Republican lawmakers, at their request.