Why I Was Arrested

As police stake out an expected protest, a reporter gets arrested. Was the arrest justified? 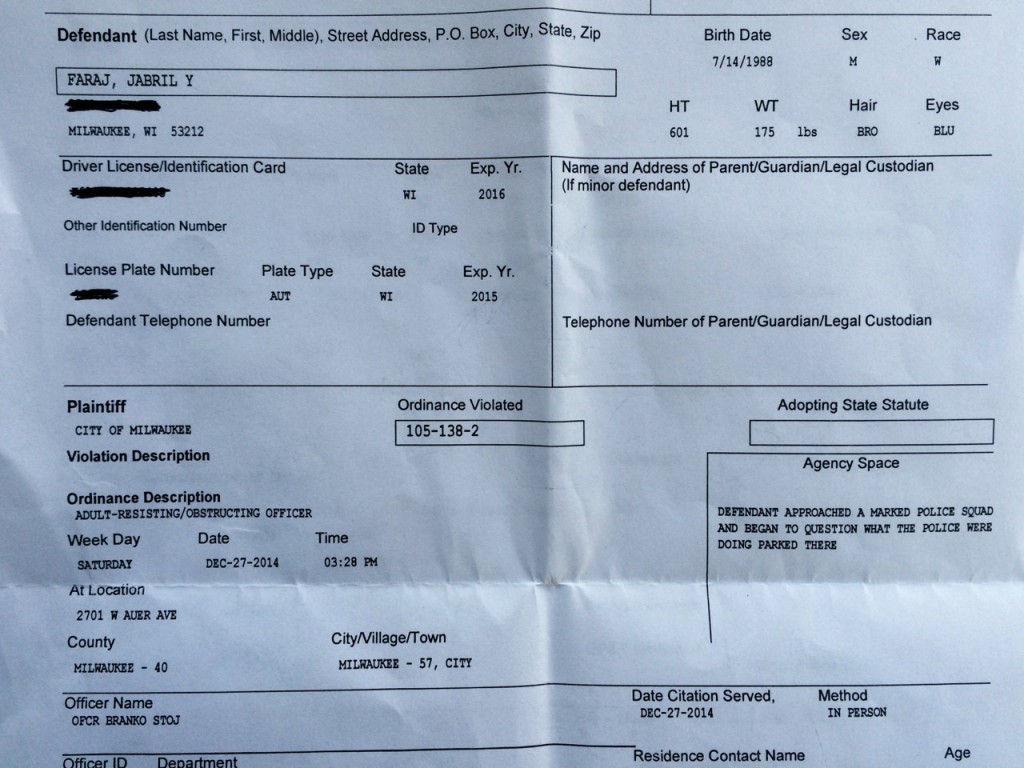 I have been traveling Milwaukee’s neighborhoods for about seven months meeting people and sharing their personal stories via milwaukeestories.org and for Urban Milwaukee. Over that time, I have also reported on a select number of news events including coverage of a dispute over student government and free speech at UW-Milwaukee, an event and subsequent march supporting Dontre Hamilton and his family, a press conference opposing the proposed I-94 expansion and the recent announcement that the officer who shot Hamilton would not be charged.

It has been my goal to talk and listen to those who are overlooked by the media and to cover events in this city that don’t get covered. So, when I received a call from my father on Friday, December 26th, around 5:20 p.m. telling me that there had been protesters near 27th and Burleigh about an hour before — and that no media was present — I felt a responsibility to be there the next time. Unfortunately, that situation — where something newsworthy occurring in the central city is not being covered — is all too familiar here. And the media can serve to keep both protesters and police honest.

When I saw a posting on Facebook saying there would be a meeting there Saturday, December 27th, at 3 p.m. I dropped what I was doing, grabbed my camera and recorder and got in my car. I arrived at the corner of 27th and Burleigh around 3:15 and greeted three other people standing there — one black male, one black girl and one white male, who identified himself as Christopher. I simply waited in the cold — wearing a blue jacket and bright orange winter hat — unsure of what, if anything, was happening. The girl said there would be no marching, today. And Christopher mentioned that he had come from the west and observed about ten police squad cars and a bus.  This, to me, suggested an effort on the part of police to arrest a large number of protesters, should any activity occur.

A couple minutes later, another black man, who identified himself as Corey, got out of a car, came up to us and said nothing would be happening, as well. Immediately after, he and two other people who had also parked left in their cars, leaving the four of us still on the corner. We then decided to go our separate ways but, before doing so, I handed a card to all three and asked them to contact me, should anything else occur in the future.

Around 3:25, I headed back to my car, which had been parked on 26th Street just north of Burleigh. I placed my camera and recorder in the back seat, started the car and began to drive north on 26th Street toward Auer Avenue. I had it in mind to appraise the situation at 35th and Burleigh — where we’d been told police had assembled — but, as I reached the corner of 26th and Auer, I noticed an unmarked squad car sitting on the east side of 26th Street right before the intersection. I passed that car and turned left on Auer. As I turned, I immediately spotted a marked squad car sitting on the south side of Auer about 20 to 30 feet west of 27th Street. I was skeptical about the amount of police activity in the area, especially considering what I had just heard. I approached 27th, looked left, right and crossed. As I approached their car, I was going to simply continue on but decided, instead, to inquire about why they were there. I had driven about 5 feet past the officer’s driver’s side window when I stopped my car and reversed until our windows were aligned.

We were facing opposite ways on the street so I was not directly next to the car; to my recollection, I maintained both hands on the steering wheel. I rolled down my window, as did the officer, who I would later learn was Branko Stoj. I asked, “Hey, why are you guys over here?” He ordered me to move along, disregarding the inquiry. When I did not comply in the split second after his order — I started to say, “I was just wondering,” and attempted to move but was still in reverse — Officer Stoj quickly exited the vehicle, as I was trying to shift into drive, and opened my driver’s side door. He commanded me to put the car into park, which I did. Officer Stoj then pulled me from the vehicle and handcuffed me. I was quickly searched — they found no weapons or any other illegal contraband or substances on my body or in the car.

At this point, I was honestly surprised and told the officers I wasn’t aware that I could be handcuffed for asking questions. As this was happening, Officer Stoj transferred me, still cuffed, to his partner, Officer Joseph Anderer, and began searching my vehicle, to which I said they were conducting an unlawful search. Within about 45 seconds of me being pulled from the car, at least four other police vehicles were present on the block (two marked squad cars – one blocking Auer at 28th and one on the corner of 27th and Auer – the unmarked car I had noticed on 26th and Auer and an SUV – maybe a suburban). I told another officer why I had been taken out of the car, to which he simply said, “Okay,” and kept walking. I, then, asked why I was being arrested and Officer Anderer, who was holding me by my arm, responded, “You’re a domestic terrorist.” In the initial aftermath, I clearly recall being accused of “stalking police” — a charge which would be repeated multiple times — and was asked if I was trying to kill a police officer. I also heard an officer ask, “Is he one of the three we’re looking for?” to which another voice replied, “Yes.” Also, in the course of this interaction, an officer, possibly Anderer, said, “We’re gonna fuck with you and your friends a bit.”

Withing about five minutes of being pulled from my vehicle and handcuffed, I was in the back of another squad car on my way to the District 7 Police Station. My car was impounded, despite pleas that I couldn’t afford to get it out.

Upon reaching the station, I remained handcuffed and was instructed to wait on a bench across from a desk and computer. Officers Stoj and Anderer arrived and continued to assert that I had “stalked police” and was conspiring to kill an officer. They questioned me about the belongings they had taken from my vehicle — my camera, recorder and a walkie talkie — and the nature of milwaukeestories.org, asking if I had ever written anything supporting the killing of cops. I said no. They asked me where I had gotten my equipment. I answered that I bought the recorder online, most likely through Amazon, had been given the camera from a friend and had neglected to return the walkie talkie after an event I had volunteered at and used it. They asked if it was stolen — or had been reported stolen — and insinuated they would like to charge me for theft. Throughout the entire interaction, I remained polite, referring to the officers as “sir.”

Both the camera and walkie talkie, as expected, came up clean but the officers continued to argue with me about the details of our previous interaction. Officer Stoj said, “You don’t say, ‘What the fuck are you doing here?'” I, again, politely responded that I had, in fact, not used any language. He, at some point, said that it wouldn’t have been a problem if I’d just moved along. To which, I tried to explain my car being in the wrong gear and said, “If you’d just given me the opportunity…” but Officer Anderer, cutting me off, proclaimed, “We don’t give opportunities, we end things.”

In the midst of all this, there came a moment of humanity when Officer Stoj mentioned he was just glad he’d be able to go home that evening, noting the recent deaths of two officers in New York. It was at this moment, I acknowledged the potentially suspicious nature of my behavior while in the car and apologized to him, which he accepted. However, I also noted that, in my experience, it has not been a crime to ask questions of law enforcement.

After this exchange, the realization that none of my property had been stolen and my noting I graduated from Northwestern University, tensions eased considerably. I was told I would be receiving two citations — one for Resisting or Obstructing an Officer (City Statute 105-138-2) and another for Improper Parking/Standing of Vehicle (Wisconsin State Statute 346.54). The officers relaxed and even offered a bit of small talk over the sophistication of my voice recorder. However, at this point, two men — who remain unidentified but who I assumed to be civilians in employ of the department — came out to the table where Officers Anderer and Stoj were sitting. The officers relayed their version of the incident and one of the men, who apparently thought me quite dumb, turned and said, “You’re lucky you didn’t get shot,” to which Anderer immediately added, “We don’t mind making the news, again.” I held my tongue except, at a later point, to say that I believe any death is a tragedy. Officer Stoj agreed.

After what must have been 45 minutes or so outside the booking room I was taken inside, searched, fingerprinted, had my picture taken and was put in a holding cell until being released around 6:05 p.m. that night.

I believe the way I approached these officers gave no suspicion other than the question I had asked — and they, presumably, did not want to answer. I do acknowledge that police are on high alert; I also believe my actions in this incident did not merit the response I received. I also have to question the motivations behind my particular arrest, given the fact I had appeared on the corner of 27th and Burleigh in conspicuous clothing as well as some of the comments made in the course of my arrest and processing. In fact, Officer Anderer has somewhat of a history with reporters.

Both Anderer and Stoj received, earlier this year, the Meritorious Service Award from the Milwaukee Police Department in relation to their apprehension of a violent subject in the process of committing a robbery.

Aftermath: Urban Milwaukee contacted the Milwaukee Police Department to request a comment. MPD spokesperson Mark Stanmeyer said this: “The individual in question did recieve two citations. The charging officer is going to have the citations reviewed by the city attorney’s office — these are municipal citations — to determine whether they will proceed with them or not.”

8 thoughts on “Why I Was Arrested”