The Cudahy Gun Club’s shooters add one ton of lead to the lake per year. So why does the county board allow this? 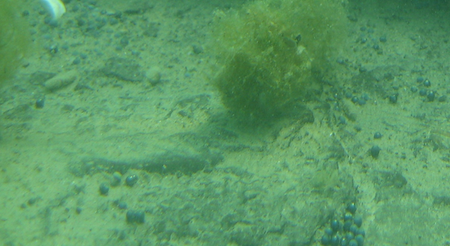 Divers from the UWM School of Freshwater Sciences photographed the lake bottom near the area where the Cudahy Sportsman Club operates while doing unrelated research in 2011. The divers found lead shot widely distributed on the lakebed. Photo from UWM.

On the bluffs overlooking Lake Michigan in Warnimont Park sits the last remaining trap shooting operation on the lake, the Cudahy Sportsmen’s Club. Established there in 1967, the club pays the Milwaukee County Parks System $3,000 a year to lease the property, amounting to approximately $10 a member. Unlike other trap shooting groups today, which operate under a strict regimen of collecting their shooting debris in order to protect the surrounding environment from contamination, the Sportsmen’s Club operates much as it has from its inception. And therein lies the problem.

For years the Friends of Grant Park and other volunteers participating in beach cleanups complained about the thousands of plastic shotgun wads littering the beaches which originate from the Sportsmen’s Club, located a full two miles north of Grant Park. For years we simply picked them up. In November 2013 we decided to see whether there was something that could be done to prevent the debris from getting into the lake in the first place. Our investigation revealed a much larger problem.

The Club operates from February through November. Its members fire their shotguns towards the lake at clay targets hurled over the bluff from eight trap boxes. By its own numbers 99.9 percent of all the lead shot discharged at the site lands directly in Lake Michigan; 25,000 rounds containing 1,734 pounds of lead shot are deposited into the lake each year. A portion of the shattered clay targets, which contain toxic substances, land directly in the lake. The rest lands on the hillside below the bluff, along with all the plastic wads. Ultimately, rain washes all the debris into Lake Michigan.

Concerns over lead in the environment has been with us for decades, leading to its ban in gasoline and paints. Starting in 1991 the U.S. Fish and Wildlife Service banned the use of lead ammunition for duck hunting over wetlands. Yet, the Sportsmen’s Club continues to deposit close to a ton of lead shot in the lake each year.

This brings the club into direct violation of the federal Clean Water Act, which requires a permit prior to discharging debris into the lake. No permit has ever been sought by the club. Environmental concerns over this type of activity led to the closure of similar clubs beginning in the late 1980’s. At the same time the Cudahy Sportsmen’s Club received a letter from the state Department of Natural Resources ordering it to cease shooting until it modified its operation to ensure that no debris entered the lake. The club initiated a search for a new site but in the meantime chose to ignore the DNR’s order. For reasons that no one at the DNR can explain, no enforcement actions were taken thereafter.

Another concern is the erosion of the park bluff at the site. The club itself has kept records over the years which demonstrate that 2-3 feet of bluff is lost every year. The site is slowly disappearing into the lake. This is a direct result of the Parks Department’s inability to plant trees, shrubs, and other vegetation at the site area to stabilize the bluff.

In November 2013 our group brought these concerns to John Dargle, the Director of the County Parks Department. He spent a year soliciting input from Parks personnel, the county’s legal staff, the DNR, our group, and most importantly from the Sportsmen’s Club itself. The club met with the Parks Director and submitted its own summary of intended action. This primarily consisted of conducting four cleanups per year of the beach area below the site.

In November 2014 the Parks Department notified the club its lease would not be renewed, citing “the environmental impacts of lead shot, shotgun wads, and clay targets; and the erosion of the face of the bluff.” In addition the Parks Director relied on a memo from the County’s legal staff recommending lease termination. The memo correctly pointed out that as lessor of the site, Milwaukee County taxpayers could be held responsible for environmental cleanup costs.

The Sportsmen’s Club immediately launched a publicity campaign seeking to salvage its lease. Ill informed vitriol was spewed via talk radio and social media. It was said that the environmental concerns we raised were fabricated, and that we secretly harbored an anti-gun agenda. This ignored the fact that our members include both gun owners and hunters. 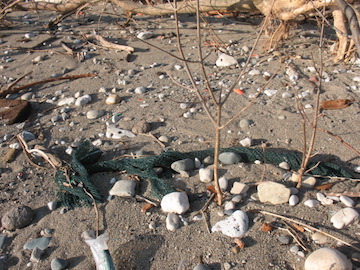 The fence no longer exists, having been buried in erosion and sand. Photo courtesy of Friends of Grant Park.

The club pointed to its four beach cleanups a year during the summer months (instituted three years ago) as a solution to the problem. Such cleanups do nothing to prevent the debris from entering the lake the other 361 days a year. Club members also falsely claimed that a fence they placed at the foot of the hillside catches all the debris being washed down by rains. Pictures we provided to the Parks Department in February 2014 show gullies running beneath the fence with large gaps throughout. Pictures from November 2014 reveal that the fence no longer exists, having been buried in erosion and sand. You can view pictures at www.fogp.org.

Unfortunately, the fuss raised by the club worked. The Milwaukee County Board of Supervisors, in the midst of their budget process, responded by tacking a one-year lease renewal provision to the budget without conducting any discussion of the issue or reviewing any information about the extent of the problem. A more recent resolution drafted by County Supervisor John Weishan at the club’s request would grant them three additional 3-year options to extend the lease, thus insuring their presence in Warnimont Park for another ten years.

We do not dispute the club’s right to exist, we object to its location. Manuals for trap shooting organizations put out by the EPA, the Wisconsin DNR, and the National Shooting Sports Foundation unanimously state that shooting into water bodies or wetlands is not an option. These manuals also describe practices to be utilized by shooting ranges to prevent contamination of surrounding areas. Given the club’s location on the bluffs of Lake Michigan, none of these practices can be utilized.

For the Sportsmen’s Club, the lease extension was not just good news but an economic windfall. In no other location could they hope to operate so cheaply. Presently all their debris is conveniently deposited into Lake Michigan. Moving to another location would require them to pay for the collection and proper disposal of tons of lead shot, toxic clay targets and plastic wads, as other trap shooting organizations are required to do. On the other hand, it’s also the responsible thing to do. While these issues may appear complicated, in the end it really boils down to a simple lesson most of us learned in kindergarten: be responsible, clean up your own mess, don’t expect others to do it for you. This is a lesson that the Sportsmen’s Club has not learned.

Please contact your County Supervisor and the County Executive and let them know it’s time for the Cudahy Sportsmen’s Club to find a new home.

Rick Kaiser is an attorney and a member of the Friends of Grant Park.

20 thoughts on “Op-Ed: How a Gun Club Pollutes Lake Michigan”