Mystery of the Curve’s Urinal

Russ Klisch and I set out to rescue a massive old urinal from a tavern about to be torn down. Then things got complicated. 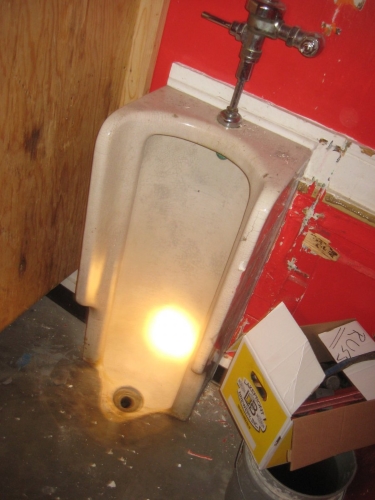 One Friday morning in December, this message appeared in my inbox:

“I have the key from Wiechman to get into the Curve.  Will head over there tomorrow after the Santas get out of our place and I’ll see if the urinal can be saved.”

I suppose this could stand a bit of explanation.

The communication was from Russ Klisch, the owner of Lakefront Brewery. The Curve, at 1634 N. Water St. was an old tavern that was about to be torn down for redevelopment as The Rhythm apartments. I had written a farewell review to the bar in September, mentioning the giant urinal that had been in the place for a very long time, and included a photo of it with my story. I called it the “walk-in urinal,” so huge was it.

Russ thought it would be an interesting artifact for his brewery, so he had contacted Jim Wiechmann, the landlord, to see if the porcelain utensil could be salvaged and to arrange to get the keys. But our adventure had to wait for the Santas — hundreds of them on bicycles for the annual Santa Rampage — to clear out of the Lakefront Brewery before we could start on our way.

Once the Santas had dispersed, Russ and I gathered tools from the brewery’s workshop and headed across the river to N. Water St. see if we could capture our most unusual prize.

Standing at 45 inches tall, 14 inches deep at the top and 18 inches wide, the urinal dwarfs modern units. This unit was big, imposing, commodious, all-encompassing, and rather forgiving of careless aim. “It’s a can’t-miss urinal,” Russ said.

We did not expect it to be an easy chore to remove the behemoth from the spot it had occupied almost certainly for over a century — and likely a generation more than that. For one thing, the base of the appliance was cemented into the floor. And beneath the cement, we would soon learn, was yet another floor of terrazzo encasing the fixture. The thing was sunk a good five inches beneath the floor level.

I thought it would be a good idea to attack it from below the floorboards, but Russ pointed out there was no basement beneath the structure, and from the looks of it, no crawl space either.

And so we opted for sledgehammers. Armed with them, Russ and I took turns pounding away at the flooring that encased the urinal. Gradually the layers of concrete chipped away, revealing that terrazzo layer. A few hearty whacks began to cause cracks in the terrazzo, and shortly thereafter large chunks crumbled away into a void beneath the floor.

Once the base had been freed, I began to remove the molding that helped seal the device against the wall. This was a snap, and the molding yielded readily.

Now we expected to face the challenging part — digging beneath the urinal and cutting the pipe that certainly connected the unit to the building’s sewer drain.

But first, I gave the urinal a little pull to see how much resistance I could feel as I tried to pull it from the wall.

There was no resistance. The unit practically fell to the floor.

Russ and I wheeled a dolly into place, set down some protective covering to keep the urinal from getting chipped, and carefully tilted it away from the wall.

Cutting the drainpipe was not to be required. There was no pipe beneath the urinal.

For all these years, it had drained straight into the earth beneath the building, and was probably responsible for the considerable sagging noticeable in the exterior and interior of the old building, not to mention the smell.

We hauled the urinal out to Russ’s truck, and loaded it up for a trip to the brewery, where Russ hopes to restore it and return it to use there.

He is thinking of converting it to a “waterless urinal” (in a way that’s what it was). This time, however, it will be connected to a drain.

Before we departed, I took a few photographs of the interior of the very old building, including the upstairs living units. Here is your last look at the Curve, which surely had the city’s most unusual tavern urinal.

Last Look at the Curve 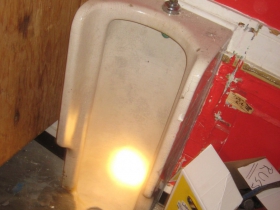 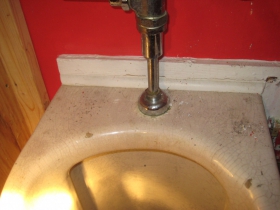 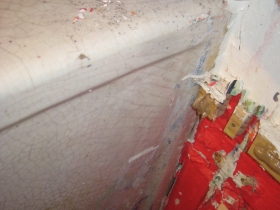 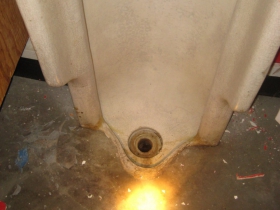 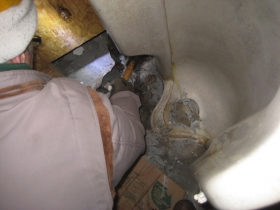 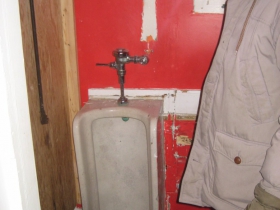 11 thoughts on “Plenty of Horne: Mystery of the Curve’s Urinal”