Milwaukee had as many as 1,000 cycling Santas, and cities like Boston, Chicago, Kansas City and Minneapolis also had rampages.

By Dave Schlabowske, Bike Federation of Wisconsin - Dec 12th, 2014 11:59 am
Get a daily rundown of the top stories on Urban Milwaukee 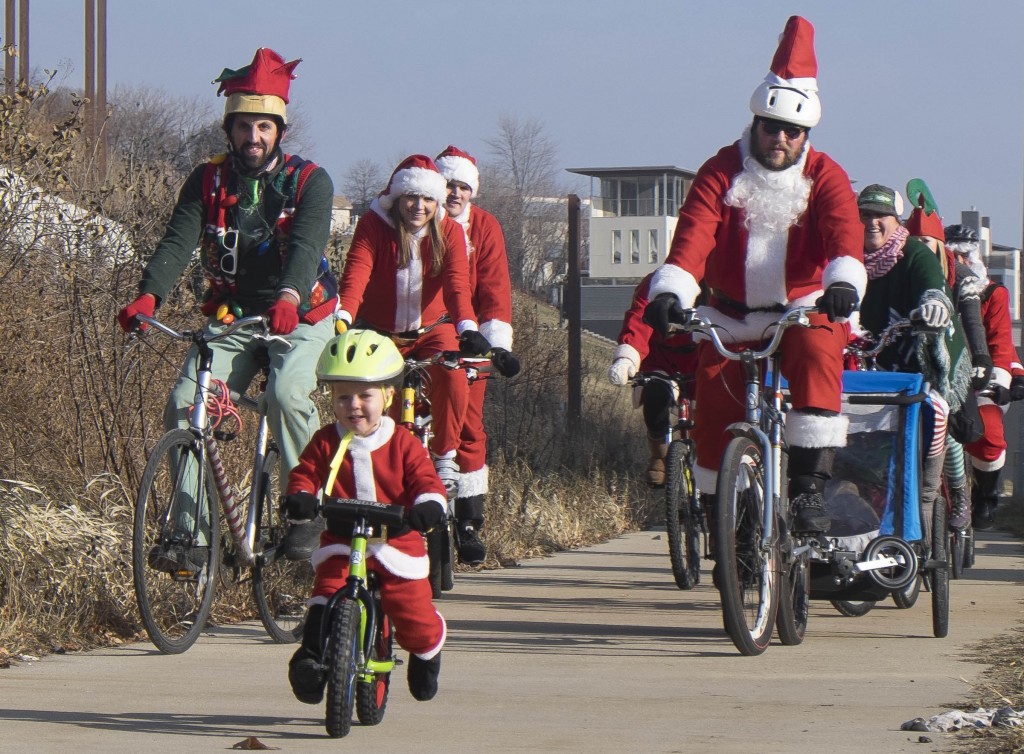 This guy gets the award for the littlest Santa with the biggest heart on the Rampage!

Milwaukee’s 14th annual Santa Cycle Rampage was bigger than ever.  Nobody officially organizes the ride, and there is no registration, so we don’t know exactly how many people spread holiday cheer on two wheels last Saturday. Although there is no official count, this year there were so many skinny Santas that they couldn’t all fit in the huge Palm Garden at Lakefront Brewery. In fact, it appears that all of Milwaukee is not big enough, as Santa Cycle Rampages have sprung up across the country. 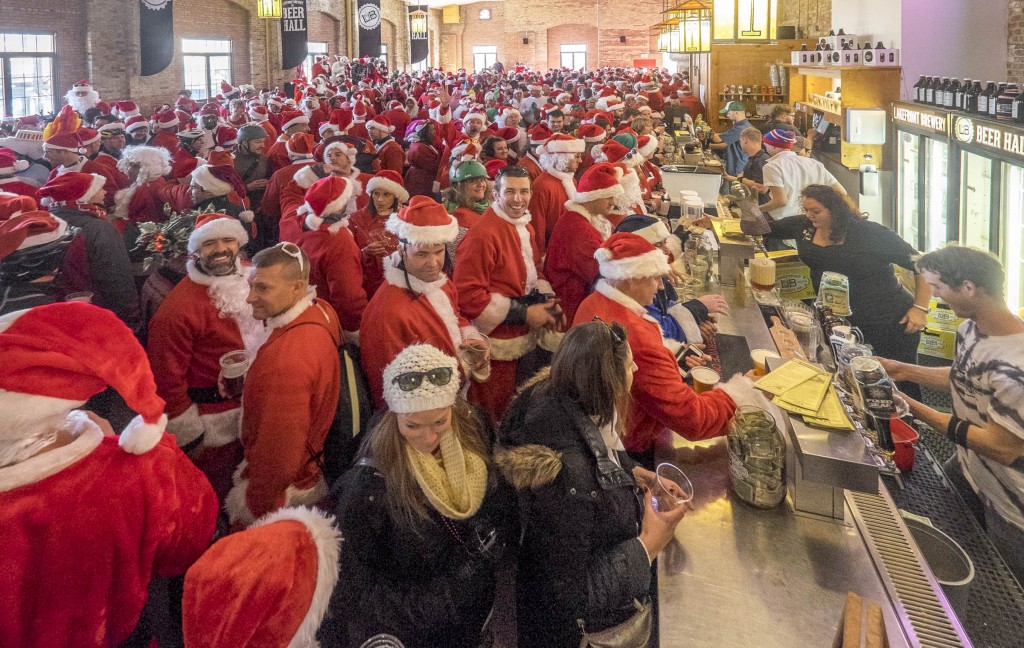 With hundreds of Santas packed like sardines in the Palm Garden, there were still hundreds more outside Lakefront Brewery who never made it inside!

Again, there is no official organizer, and the Santa Cycle Rampage has not been trademarked, but a quick search of Facebook yielded events in Boston, Chicago, Fort Wayne, Kansas City, and Minneapolis. If you are aware of another Rampage somewhere else, let us know about it in the comments section below.

I cannot take credit for the first Rampage though, as I stole the name from Chicago. Back then their event involved about 20 Santas and the odd Dreidel or two who pedaled down to Michigan Avenue and sang anti-consumerism carols to the shoppers on the Miracle Mile. I loved the name and the idea of creating a fun ride in the winter, but didn’t like the message. 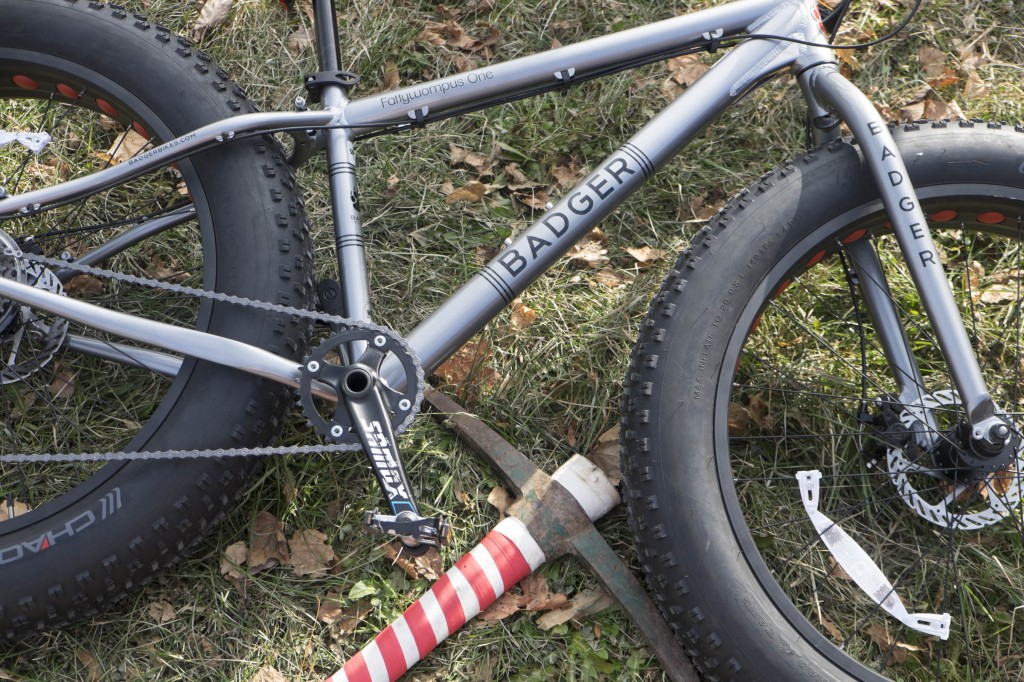 So back in 2000, I invited a handful of friends to Milwaukee’s first Santa Cycle Rampage, and tried to create a fun ride that encouraged people to try bicycling in winter. We dressed up in $14 Santa Suits from Walgreens (remember those deals?), makeshift elf costumes or basically anything that gave the feel of the holidays. We didn’t have any official stops, but because our group was small, we could stop in anywhere.

I don’t want to sound melodramatic, but it was kind of a life changing experience for me. You will never feel as safe or as welcome on the road as when you are bicycling around in a full Santa suit. Everyone is honking at you and rolling down their windows to yell at you, but instead of angry shouts to GET ON THE SIDEWALK, they are hollering MERRY CHRISTMAS and pulling over to shoot photos and video with their phones. It just might be the best introduction to riding a bicycle for transportation that you can have. 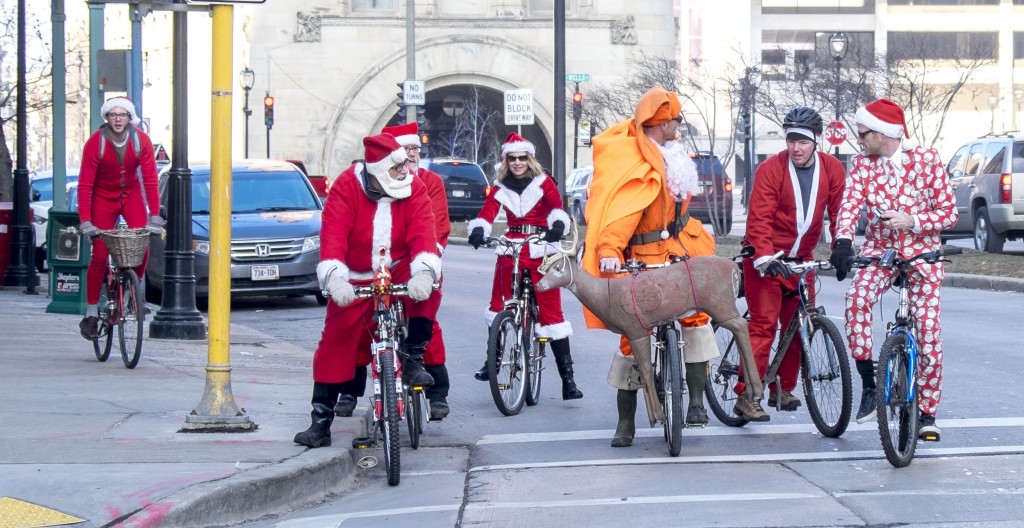 Remember, reindeer are not legal in Wisconsin! 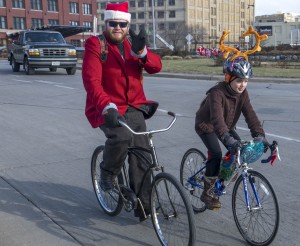 That first year we spent more time riding than we did sitting in taverns, and we even rode over the Hoan Bridge. We figured what sheriff would arrest Santa? Since then, the ride has grown every year, no matter the weather. Last weekend we had sunshine, 40 degree temperatures and somewhere between 500 and 1,000 Santas, but we have had almost as many in recent years when it has been raining, sleeting and snowing. Even in the years when the temperatures hit the teens, we have had hundreds of Santas.

As awesome as the Santa Cycle Rampage is, I have distanced myself from it as it has grown and there is more drinking. Some Santas on the ride end up on the naughty list because they drink too much. The Wisconsin Bike Fed is not opposed to having a few beers after a ride, but pub crawls are outside our mission. 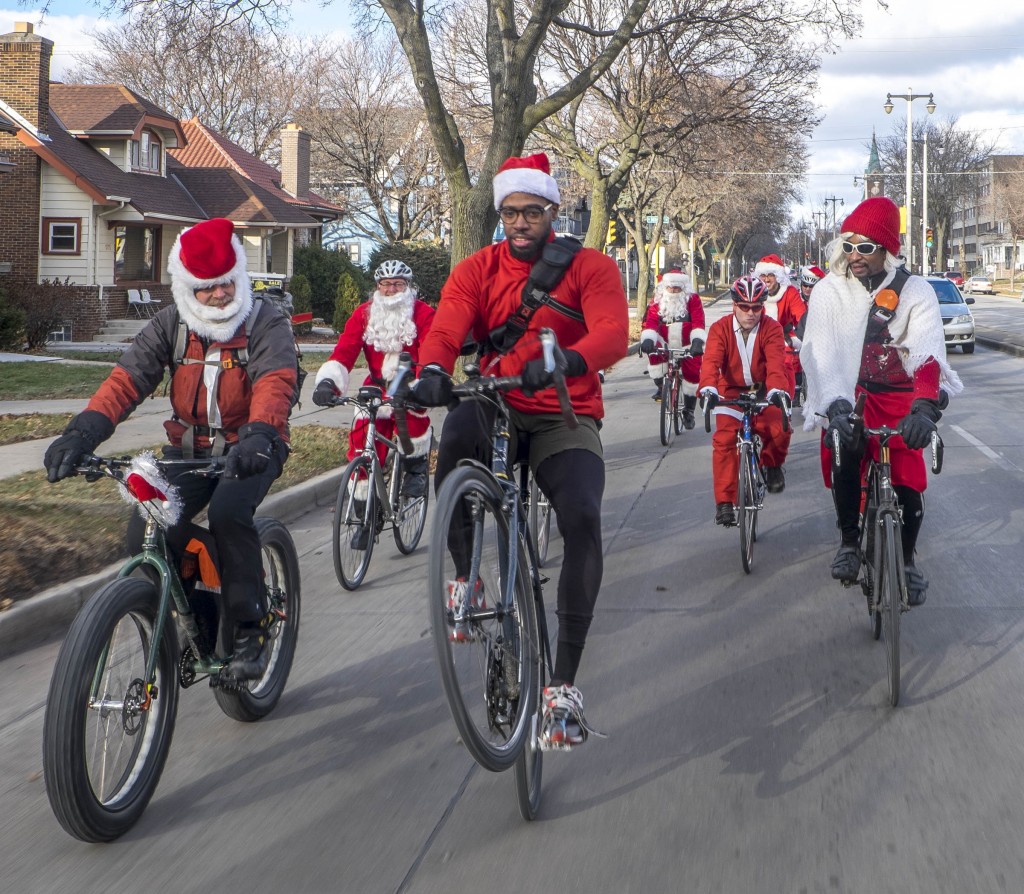 That said, a number of people approached me this year suggesting this should be a fundraiser for the Bike Fed since I started this ride back in the first years that I opened the Milwaukee office for the Wisconsin Bike Fed. Even the owners of a number of the stops on the ride this year mentioned they are willing to sponsor the ride. They each make thousands of dollars in a couple of hours, and since they are bicycle-friendly businesses, they want to give back.

That offer is very generous, and I appreciate those members who have offered to help organize registration for next year, but in order to insure the Santa Cycle Rampage, I would have to change it up a bit. I would have to make the ride a bit longer and eliminate official drinking stops. I could start the ride over near Lakefront Brewery and end it at Great Lakes Distillery or Kochanski’s Concertina Beer Hall with an after party, but I cannot insure a ride in which the participants drink. 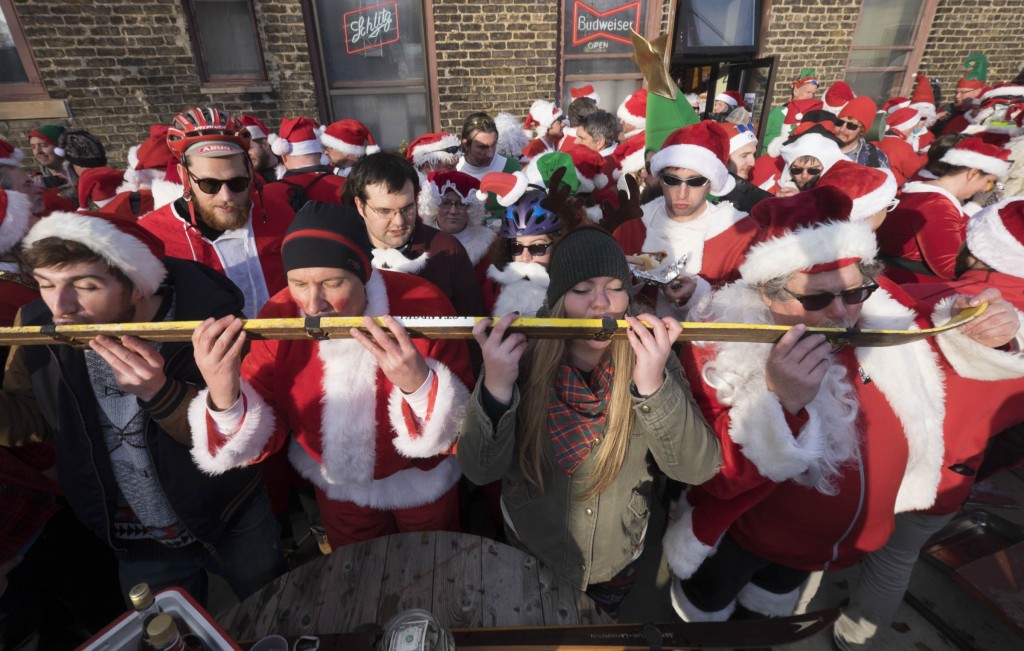 If we want to insure this ride, the shot skis at Kochanski’s have to be left until the after party and can’t be part of the official ride.

I managed to do that with the Polish Moon Ride. We put together a super fun ride that ended with a great party and 400 people registered for it. The Bike Fed earned about $8,000 from the Polish Moon Ride the first year, so if we did something similar to the Santa Cycle Rampage, I see no reason why it couldn’t generate $10,000 for bicycle advocacy in Milwaukee.

As I mentioned, I would only do this if we could get insurance and permit the event with police support, like we did with the Polish Moon Ride. It would mean a little longer ride through the neighborhoods, but I like that idea. One of the best times of any Rampage is rolling down Chavez Drive and throwing candy canes to the smiling kids. I think people could keep much of the tradition of different groups of Santas gathering for breakfast at various bakeries, cafes and coffee shops around town and riding in to the start. People could also keep the tradition of after parties at different bars around Milwaukee, so they can take their party closer to home.

So what do you say Santas? Should the Bike Fed take the reindeer by the horns and organize the Santa Cycle Rampage in 2015 or should we leave it the slightly drunken and organically organized beautiful thing that it is?

While you consider this question, I leave you with a little poem from Kurt Gering, the official bard of the Tosa Spokesmen:

Twas The Night Before Rampage

They sprang from their cocktailing to see what was the matter.

Away to the window they flew like a breakaway dash

Tore open the shutters and threw up the sash.

The moon on the breast of the new-fallen snow

Shimmered like new HED rims on the objects below.

When, what to their wondering eyes should appear

But a speeding peloton with eight spokely randonneur.

With a wily ol’ Birkie veteran up front, pulling them all

They knew in an instant it could only be Saint Al.

Their pressure was constant; their cadence the same

As he whistled and shouted and called them by name.

On, Pieper! On, Bittner! On Reetz and Christopherson!

To Lakefront! To the Distillery! To the Concertina Hall!

As the group rode past, to their amazement Reid called for a paceline

And down the street they went, with Jim Carter leading the nine.

But I heard them all exclaim, as they pedaled out of sight,

“Happy Rampage to all, and to all a safe night!”

There are more photos at the Bike Fed’s Photoshelter page here.