Crews have begun work on new exhibition space and lakefront entry for the museum, as our photos show.

The Milwaukee Art Museum’s $25 million “Plan for the Future” is now in our present, as these mud-and-concrete images below attest. Crews and subcontractors of Hunzinger Construction Company commenced work on October 17th for a project to provide pretty stuff like a new exhibition space and lakefront entry for the Milwaukee Art Museum, along with $10 million to repair gritty stuff like serious structural and deferred maintenance issues at the north portion of the museum which is connected to and includes the War Memorial Center.

The pretty stuff is still in the future. That would include a glassy addition designed by architect Jim Shields, whose withdrawal from the project, first reported by Urban Milwaukee, raised questions about the project. After a revised design was slammed by our architecture critic Tom Bamberger, and widely derided in the community, the museum brought back Shields and soon released a design by him.

Right now, on the gritty stuff front, things are muddy, with the windows of the Kahler addition to the War Memorial and Art Museum complex now caked with clay, where giant machines drilled three foot wide holes for pilings.  As they get filled, the pilings will support the new addition while stabilizing the existing structure.

In an improvised yard to the north of the complex, ironworkers assembled the rebar and wire cylinders that would soon be encased within the concrete pilings. A forklift hoisted the parcels to a staging area. In short order, they would be lowered into the piling shaft, submerged in concrete from one of the concrete trucks then idling, never to see the light of day or the hands of man so long as we shall live. That’s progress!

A dispossessed flock of Canada Geese moved their foraging range inland from their usual lakeshore habitat. These infernal critters used to migrate, or at least be fair game, this time of season.

What Brought Us to this Point?

There were a number of issues to be addressed with the Saarinen-designed 1957 War Memorial building, which housed a considerable component of the art museum’s collection. But things like buckling floors, leaking ceilings, creeping mold and other issues (where is there a bathroom!) intervened. Things had reached a crisis point at the county-owned facility, jeopardizing the collection and the tenant art museum’s ability to raise funds for repair. (The art has been removed during construction, and the permanent location is to be reinstalled.)

Milwaukee County responded with a $10 million appropriation in 2013.

The required repairs ran from top:

The photos of the Saarinen building show the original courtyard stripped of its paving, revealing a new bed of roofing material substrate. The eternal flame at the memorial fountain for fallen soldiers is extinguished for the interim. This portion is not a Hunzinger project.

The photos of the Kahler addition show the work being undertaken to take care of that foundation’s seepage, as well as to provide a stable foundation for the proposed addition to be sited on this patch of filled lakebed.

For more details, and to contribute: http://mam.org/campaign/ 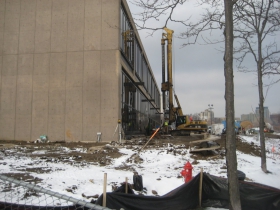 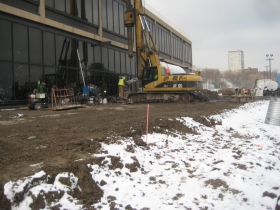 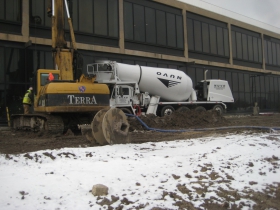 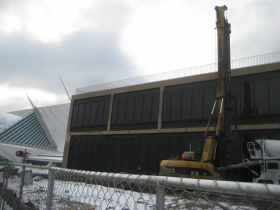 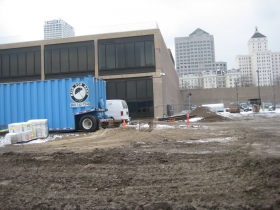 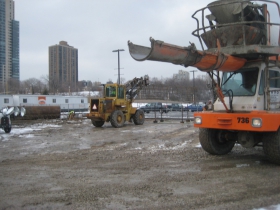