Organizations met last week for a Milwaukee remembrance day. World-wide the number of such victims is increasing. 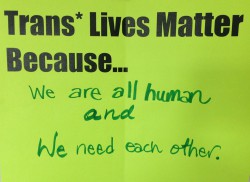 The organizational power of Milwaukee’s LGBT community continues to grow. That could be seen last week, as almost 100 people attended the Transgender Remembrance Day ceremony at the Milwaukee LGBT Community Center (1110 N. Market St.) on Thursday, Nov. 20 at 6:30 pm. There were four speakers this year along with numerous attendees from LGBT and social advocacy organizations including the Reproductive Justice Collective, City of Milwaukee Health Department, Fair Wisconsin, ACLU, UW Waukesha LGBT Resource Center, and Project Q.

Michael Munson, executive director of FORGE, an organization that supports transgender people, read the names of 81 transgender murder victims who died in the last year. The victims were as young as 8 and were mostly from Brazil, although some were from India, United States, Honduras, and Philippines. Many were deemed “unknown.” Munson said the deaths have increased compared to last year. Participants then got a chance to share the names of their deceased transgendered loved ones, if they had any. Some became emotional at this point, as five people called out names.

“Tonight went similarly to past ceremonies,” says Munson. “We try engaging people through a form of interaction; this year we made signs saying “trans-lives matter because…” and participants wrote their thoughts. We always read the names of trans people who have died from anti-trans violence from the previous year to this year.”

Munson presented the names of deceased individuals and emphasized that a diverse crowd attended the ceremony, not all from the LGBT community. Some of them might have had transgender loved ones, but he noted that some may have attended because they were “guilt tripped.”

“We’re here to connect and observe with the painful intersections that contribute to the deaths of these individuals and the hundreds who are unnamed. We’re here to recognize that our lives are touched by the violence, whether we realize it or not,” he declared.

The first speaker was Livia Rowell-Ortiz, of Genderqueer Milwaukee, an organization that strives to educate the Milwaukee community on gender variant issues. She discussed the vast number of under-reported transgender deaths as well as the racial gap.

“Trans-women and women of color specifically represent an overwhelming majority of these murder victims. When searching for these statistics, I noticed no sources acknowledged this,” Rowell-Ortiz noted.

Transgender Remembrance Day is commemorated internationally on November 20 in memory of transgendered people murdered due to prejudice, hate or transphobia. The holiday was founded by Gwendolyn Smith, a trans-woman graphic designer and advocate, in honor of her transgender friend Rita Hester, who was a murder victim. Like many other trans-violence deaths, her case remains unsolved.