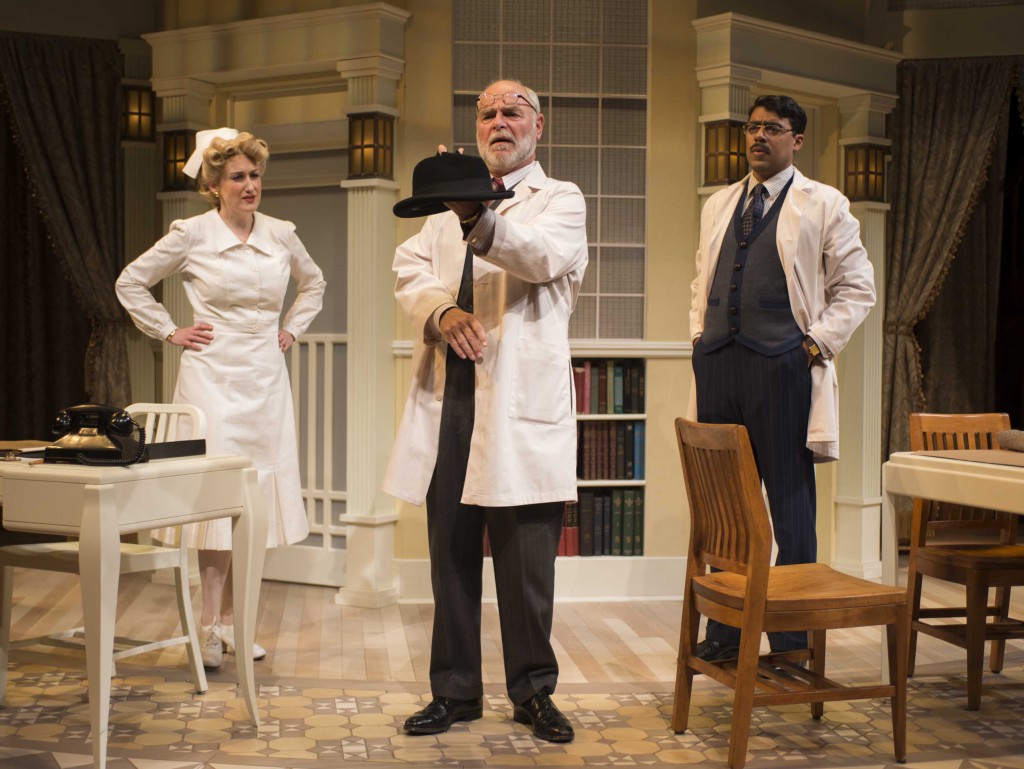 The top Broadway plays of the 1930s and 1940s deserve affection for tight construction and for skewering the pretensions of upper and middle class respectability.  A few also added a subversive touch of the fey that caused doctors and socialites alike to doubt their own view of sanity – and that became an enduring appeal of Mary Chase’s 1944 hit play and her creations, genial Elwood P. Dowd and his invisible pooka, a 6 ½ foot white rabbit named Harvey.

Its main stage subscription presence through Dec. 21 at the Milwaukee Rep’s Quadracci Powerhouse signaled that, as happened two years ago at New York’s Roundabout Theater, an experienced professional company could restore to importance not just the role of Dowd, but the entire three acts. In other words, to rescue Harvey from the clutches of Jimmy Stewart movie memories and the college and community theaters that now most  frequently schedule it as a familiar chestnut to fill the seats, something the Rep would surely moved past by suggesting larger values in the old and new that come under its gaze.

Unfortunately, this production returns the whole of Harvey to the mausoleum.

That’s a staggering disappointment given a veteran company and a central performance by Jonathan Gillard Daly that does catch the seductive simplicity of Dowd and his affection for drinking buddies and a giant rabbit. Shaking hands, flirting naturally, sitting casually while inviting Harvey to take a nearby seat, constantly suggesting going out for a drink, the actor relishes those naturalistic touches of guileless pleasant ease and distracting comments. His manners lead all those he meets to not see or almost think they see Harvey, forcing re-evaluation of the concept of normalcy.

The character remains a reminder for all eras not to be so certain about our own social goals and ambitions. But the vehicle requires more than emulating the charm of Elwood or providing a showcase for Rep Associate Artist Daly. It needs constant comedic orchestration and foils who can top him as their resistance to Harvey turns into confusion about what is crazy. To survive as rounded experience requires a consistent theatrical assurance, a full impersonation of the characters and a naturalness in this world of pompous mansions and high-class rest homes that are really glorified looney bins.

Director KJ Sanchez starts the mania too high as if she doubts we would otherwise get the joke. The first scene almost defeats in its stridency any character establishment for Deborah Staples as Dowd’s sister who longs for the social recognition her brother’s crazy obsession has denied her. Only later can Staples with her mastery of a sustained tone, a simple look or a ferocious command reveal more than a neurotic social climber eager to commit him for social acceptance, becoming what is hinted at the start, the caring if high-strung counterpoint to Elwood.

In fact, were it not for Laurie Birmingham’s clever cameo as an overbearing matron, the first long scene would be more painful floundering than comedic. Things do improve. The production is sprinkled, but only sprinkled, with veterans who understand how to play broad and convincing simultaneously. They have enough personality and stagecraft to survive where less capable performers Gabriel Ruiz and Kristina Loy – and even, surprisingly, Kelley Faulkner —  have far more trouble making stereotypes believable.

Laura Gordon’s high command of nuance makes her brief turn as a doctor’s wife more than a plot device. Similarly, much admired veteran Richard Halverson brings presence to the bewilderment of the family lawyer, an otherwise pat 1940s part. James Pickering has authoritative fun as the smug psychiatrist turning into the genuinely pooka-scared psychiatrist – until the plot and the director simply dump him at the end. As the insane asylum assistant, Justin Brill survives unevenness with some good moments resurrecting that overly agitated, 1940s-era comedy styling. And Rep intern Chris O’Reilly holds his own in such fast company.

But the cast’s delight in each other isn’t enough without seamless meshing of the whole, and that was the responsibility of director Sanchez.  The entrances and exits, twists of place and expository shards of dialog need inventive handling to not seem so convoluted. It’s not just the actors’ imagination, but the audience’s imagination in “seeing” the invisible Harvey that deserved greater trust and less reliance on devices.

Worrisome, too, is the Rep’s growing tendency to lean on its masterful tech crew. Dan Conway’s revolving set is a wonder, but it is eye candy that doesn’t speed the proceedings and actually distracts from them. The staging and acting techniques should seem almost as invisible as the rabbit. When they aren’t, belief is interrupted too often to transport the audience. The meaning of Harvey deserves to linger longer in the mind than this production will. 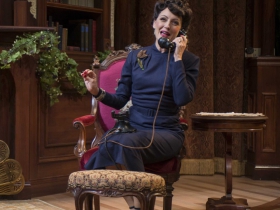 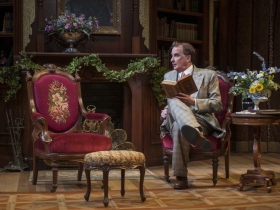 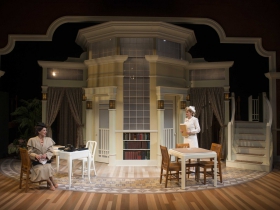 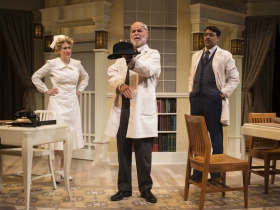 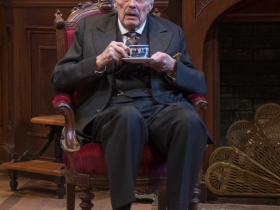 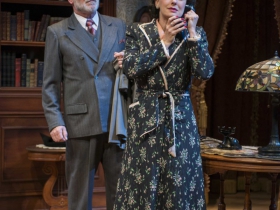