After skewering privileged classes in his early comedies, dramatist A.R. Gurney moved two years ago to throwing acid at the entire establishment.  He envisioned how Homeland Security in a fear-ridden conformist society would take into “protective custody” (jail) any outspoken young man whose powerful social parables threatened the political and religious status quo.

This warped America of constant crackdowns and incarcerations forces Mary and Joseph, the parents of the seized Chris, to ask a civilian authority to intercede. Fortunately he’s an old acquaintance named Pontius.

If that isn’t transparent enough, Gurney pounds the meaning even harder  with an extended drawing room debate in an officious antiseptic waiting room among politician Pontius (a familiar Drew Brhel), Phyllis (his Nixonish conservative wife given to snippets of pop psychology, played with relish by Carrie Hitchcock), the worried parents (Mary Kababik and Michael Pocaro), a fishing buddy who betrayed the missing Chris (Doug Jarecki), a prostitute in love with Chris (Alexandra Bonesho) and an amused Brian Myers as a scribe named Mark ((hint hint and hint again).

Such is the premise of Heresy, the Milwaukee premiere at Next Act Theatre though Dec. 14. Gurney is here a social observer in search of a form, unsure if stage repartee is the best way to carry this message and proving it’s not. His dissection of modern America is precise in its details, doubly timely today and certainly dead-on for anyone of liberal persuasion, but with a touch of awareness to let the right land a blow or two.

But it is also an overdone sermonette posing as wit, more like an entr’acte, an essay between acts. The only explanation left for staging Heresy comes down to “someone must pay attention.” If socially concerned companies like Next Act didn’t provide a hearing for an outraged intellectual commentator, who will? Certainly not TV news.

But this is miles away from Don Juan in Hell or other stage repartee where  smart people raise provocative questions. The premise would have worked better as a standup routine for Lewis Black rather than dribbled over us in the form of character dialog.

Rather than trusting the interpretive naturalism of these experienced actors to snag the occasional laugh, whip past the groaners, take their bows and shuffle off,  Next Act has tried to add depth with length.  Having assembled capable actors and singers, artistic director David Cecsarini didn’t want to let them go without testing our appreciation of the talents on hand.

So Next Act has concocted an entire second act of characters stuck a year later in a bizarre basement cabaret during a government crackdown.  Versatile keyboardist Myers and personable Jarecki set the tone and words, mainly demonstrating enough ability to parody the bottom rung of Kandar and Ebb show biz clichés. They should never ever again get stuck in throwaway stuff like this. Only one song, “Hoo Rah Rah,” comes anywhere near the point as performers lean too hard on their own experience and training to keep the audience engaged. The surprise is that they occasionally succeed in distracting us.

Though occupied too often in one-joke vignettes, Hitchcock suggests a  singing and acting versatility that merits a much better showcase. And while there may not be much longevity in Bonesho’s current niche, she sure is locking up the local franchise in comic sexpot roles. As the parents, Kababik with her frantic liberalism and particularly Pocaro in his gentler confusion hit more evocative notes than their parts warrant. Brhel provides a sturdy caricature in a role that deserves no more.

The performers are struggling to amuse with what Gurney has overwrought and overwritten — and then with an extended cabaret interlude that, despite some surprises, compounds the errors. Both acts reveal that Next Act was far more concerned with giving the actors employment than a chance to stretch thespian muscles. 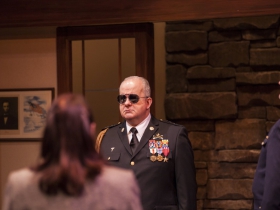 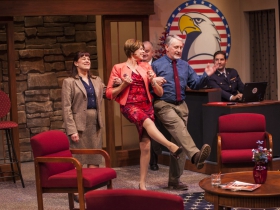 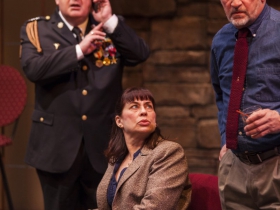 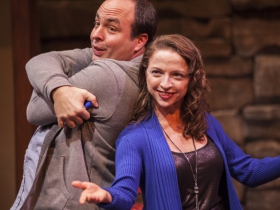 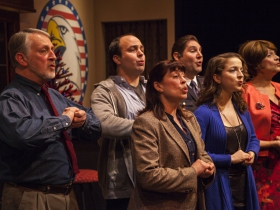 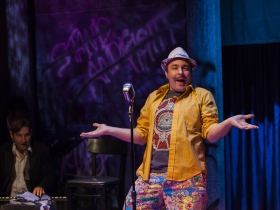