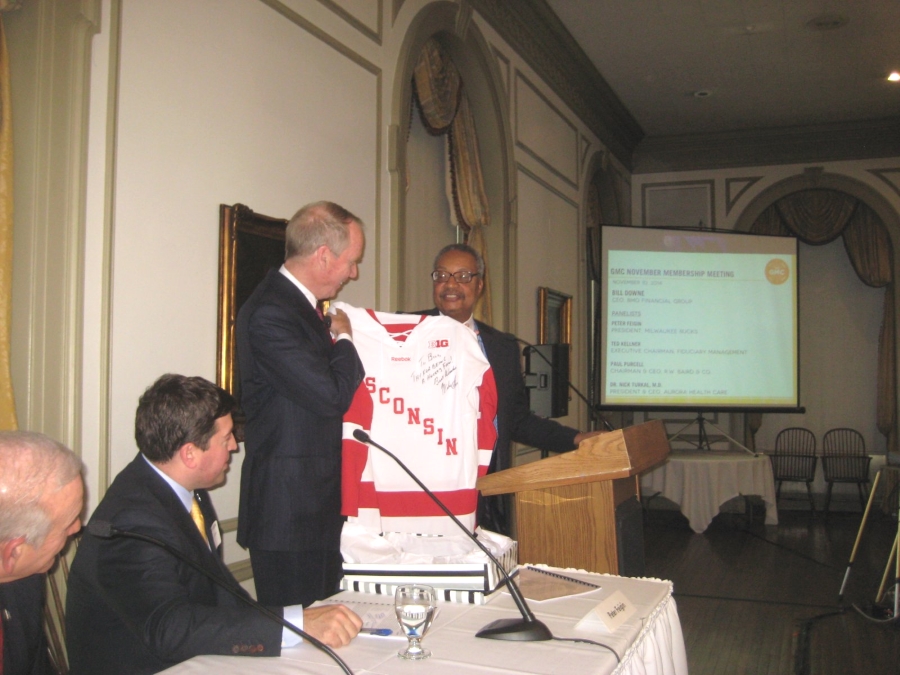 When the Bank of Montreal opened its doors in 1817, the first thing the founders did was to install a printing press in the basement and begin churning out banknotes. “Those were the good old days,” BMO Financial Group CEO William Downe told the November monthly meeting of the Greater Milwaukee Committee Monday, November 10th at the University Club.

But the notes were backed by gold, he added.

Those were the good old days, indeed!

Today, a well-capitalized bank has a capital ratio of about 6 percent (BMO Harris’s is 11 percent); banknotes are issued by nations and are backed by — faith. Downe says he has been a frequent visitor to Milwaukee during his 30-year career, and brought an outsider’s perspective on the local and regional economy to the meeting of CEOs. The “modernization of the city is very evident,” he told the 130 attendees at the luncheon meeting.

“Milwaukee’s infrastructure has been transformed,” he said, adding that there has been a “renaissance of the face of the city.” The lakefront is “extraordinary,” he said, even to the north where “you have all of those fabulous places where you can golf and sail.”

Our infrastructure development and the transformation of our economy to a global supply chain means that Milwaukee can expect a 2.5 percent increase in its Gross Domestic Product in 2015, he said. It was just 0.5 percent two years ago. The strategically located Great Lakes region, where the international bank now deploys 40 per cent of its capital, has an annual economic impact of $5.2 trillion, greater than that of Germany, France, Brazil or the United Kingdom, he said.

The region is the largest trade partner with Canada, with $7.5 billion in annual sales to the nation coming from the State of Wisconsin last year.

Although we have an “economic recovery that lacks conviction,” things should improve in the face of global and US economic expansion, Downe noted.

The growth of prosperity first gains traction in local economies, and consumer confidence, a key indicator, is up to 94 percent; a 5 percent increase in just a year, Downe said. Other observations made by Downe included:

Downe’s Canadian vision of the region pays greater homage to the maritime history and influence of the Great Lakes than is commonplace here. Our economy is “not an accident of geography, it is because of geography,” he said.

Downe took questions from a panel including:

Purcell said it was his impression that banks in Canada fared better than the US during the recession. Why was that?

Downe credited it to the nature of the underlying economy. Canada was more efficiently able to put a stimulus package into effect without fear of a burdensome deficit at the federal and provincial level.

The Dominion was able to institute the stimulus rapidly while the issue was still mired in partisan politics in the US. Also, as noted earlier, Canadian banks were better capitalized as a whole than US banks, and much better capitalized than the European banks, which still lag.

The controversial TARP program worked, he said, in part because it provided capital to banks whether or not they needed it.

Kellner brought up the “too big to fail” syndrome, noting that the share of the business of the largest banks rose from 40 percent to 52 percent since the recession. Are the big banks too big?

Apparently, the big banks are not really that big at all, according to Downe, since there are only 5 banks among the 50 largest capitalized corporations in the US. Next question.

Turkal said he really didn’t want to bring up the issue of the United States versus Canadian Health Care systems, but — Downe said they are two great systems based in terms of clinical outcomes, but “one is more affordable than the other.” We’re guessing that would be Canada’s.

He segued to the point that his bank has found that one characteristic of Midwest cities is their transition. The way we get products to the market is changing, he said, and he has seen evolution in companies putting in the advanced technologies needed for the new system of global supply chains.

“Ten years ago, unless a manufacturer opened a plant in China, it could not compete,” he said. Today, with the global supply chain, “you can make a component in Milwaukee that turns up in a finished product literally half way around the world.”

Feigin, who has an arena to build, and is going to need hundreds of millions of dollars to build it, asked where commercial lending is going to go over the next two to four years.

Feigin should be encouraged, Downe said, as credit should not be restrained, as it was during the recession when even excellent risks could not access capital.

A result of the recession was that “the highest quality assets wound up in the hands of the most competent management,” giving banks more confidence after the great shakeout. Banks know there will be losses, but not on the scale of past years.

After the event, GMC chairman and House Confidential Honoree and BMO Harris board member John Daniels presented the Canadian speaker with a UW Badgers Hockey Jersey, autographed by coach Mike Eaves. Daniels also presented a special souvenir from the upcoming 2015 PGA championships in Whistling Straits signed by Pete Dye and Herb Kohler. The bank is a sponsor of the event, to be held up there to the north where we have all those fabulous places to golf.

Among attendees was a contingent from BMO Harris including Raquel Filmanowicz, 96-year old Astronautics owner Nate Zelazo, venture capitalist and part Bucks owner Cory Nettles, Linda Mellowes, Darryl Johnson, Dan Buskiewicz of the Building Trades Council who says we should get on with things and start a new arena — and trolley system (“essential”), Dan Steininger, Alan Pearlstein of the USS Milwaukee Commissioning Committee who says a great event is planned for the launching of the Wisconsin-built ship in our city next year, Sheldon Lubar, Greg Marcus, House Confidential honorees Ian Abston and Cecelia Gore and others too numerous to mention, including Gary Grunau. 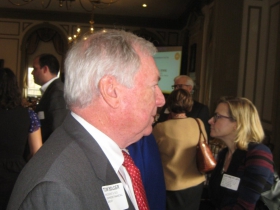 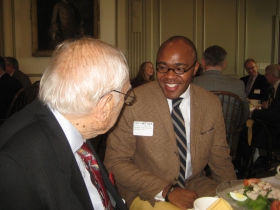 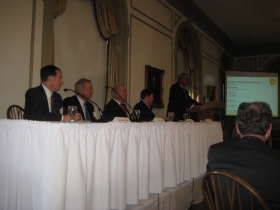 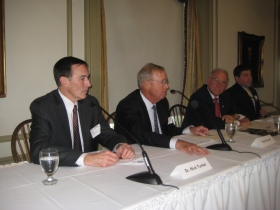 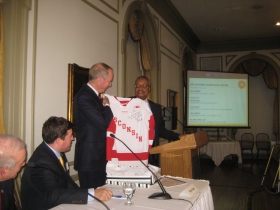 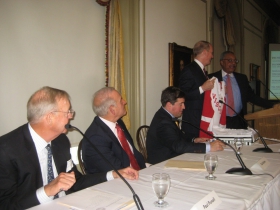