Built for a sea-farer, with a splendid harbor view and four fireplaces, it commands a spot on Lafayette Place. 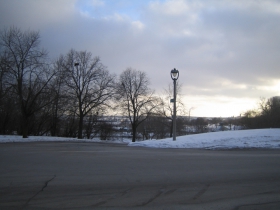 You can see from the outside of this mansion that there is something to look at from the inside. Photo by Michael Horne.

You can tell just by looking at the outside of this elegant mansion that the view from inside is likely to be just as good. Its quality detailing and fine lines announce the sort of confidence that only a well-sited structure can summon. Turn around and your eyes will be greeted by a magnificent panorama of the lakefront and Milwaukee Bay. Architects Ferry and Clas [who built the Central Library] took advantage of the commanding site while designing this  1901 home for William E. Fitzgerald, the son of a Lake Michigan sea captain, president of the Milwaukee Dry Dock Company and the Assistant Manager of the American Shipbuilding Co.

Of course such a man would like to keep an eye on the Great Lake upon which his fortune floated, but he died, at 41, before the home was completed, leaving behind his widow, Jessie Blackburn Fitzgerald and two young children, including the 6-year old Edmund Fitzgerald, himself destined for a place in maritime history. By 1905 widow Fitzgerald and family had moved to 2506 N Terrace Ave., so they never actually occupied this home. 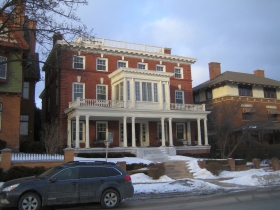 The Lafayette Place home soon passed into the hands of Mrs. M. A. Reinhardt, who commenced building a stable in the back yard in 1903. By 1926 the home and stable/garage was owned by Alexander C. Eschweiler, itself a tribute to the home’s quality and location, since the architect had made a career of building mansions for the wealthy, yet eschewed the typical practice of his profession of designing one’s own home. This one was plenty good enough for him.

Eschweiler died in 1940, and the three-story home was split up into two apartments. It was to remain a duplex, albeit a very nice one, for over 60 years before it was restored to its former dignity by its current owners, Randy D. Bryant and his wife Cecelia I. Gore.

In a way, the home was lucky to survive. The belt of mansions that lined N. Prospect Ave. along the lake had suffered many changes between the wars. Many were converted to duplexes (or, worse, rooming houses), while others were torn down for relatively large buildings that took advantage of the views and the convenient streetcar and bus transit in the area.

It seemed for a while that the march of high rises might continue along E. Lafayette Pl., one of the few streets in the area to run due-east / west. Avery Sherry, owner of the Milwaukee Real Estate Company, certainly hoped so when he bought the property for $13,000 after Eschweiler’s death, a deep discount from its 1926 assessed valuation of $36,000. Sherry hoped to assemble this home and three adjacent lots into a single parcel for the construction of a high-rise, but was unable to secure the needed zoning variances. Instead it was converted into a duplex. The home went through a number of subsequent owners, some of whom lived in the building while renting out the spare unit.

In 1978 owners Jerry Hanus and Larry Eschenburg turned the coach house into an apartment. That property has since been divorced from the main home, and is now a duplex on what is known as “Carriage House Row,” the only more-or-less alley in the neighborhood, here given the dignity of a street name, E. Windsor Pl.

The mansion proper fell into a number of other hands, including those of Don Graeber, Thomas W. Scholl, and Gillian U. [McKeithan] Wigdale who sold it in 1992 to John Ogden, Jr. and his wife Patricia R. Ogden of the Ogden Real Estate Company family.

The Ogdens moved there from a home they had remodeled on N. Astor St. just four blocks north of E. Ogden Ave. They drew up plans to convert the E. Lafayette Pl. building into a three-unit condominium, yet this too failed to come to pass.

There is a coffered, barrel-vaulted ceiling in the front hall, a green marble surround on the living room fireplace, an elaborate built-in dining room buffet, pocket doors between main rooms which themselves are paneled to 5 feet in walnut and other fine woods. Non-pocket doors have brass hardware. The assessor noted a “very large bath” on the third floor with a “fancy water closet. Bath superior.” It is just one of five full and one-half baths in the dwelling. There are also four bedrooms and four fireplaces.

The home is surmounted by a widow’s walk, although this feature was added by the Ogdens, not by the original owner, as might have been appropriate for a seafaring man. It is accessed via a spiral staircase to a boat-type hatch. The deck offers a splendid harbor view, and would be a festive place to enjoy a fireworks display, as its owners know.

About Randy Bryant and Cecelia Gore

In addition to his personal residence, Randy Bryant is the registered owner of 8 rental properties assessed at $3,722,400, and taxed at $111,485. The 1980 UW Graduate worked for Allstate Insurance for 10 years and then held a variety of senior level positions in Brazil, Spain, and England for Motorola, Inc. from 1990 until 2003, when he decided to return to his home town of Milwaukee, where he got deeply involved in real estate obligations. In 2005, Bryant was described as being the largest owner of single family homes in North Point. Bryant became fascinated by historic buildings after visiting the Eschweiler-designed Charles Allis Museum [then Library] as a child.

Bryant currently serves as President of the Board of Directors of the Milwaukee County Historical Society, where he served as Interim Executive Director from March 2010 to August 2011. In 2012 he was named the President and Chief Executive Officer of Ten Chimneys, the Genesee Depot National Landmarked home museum of Broadway stars Alfred Lunt and Lynn Fontanne. Bryant, a former member of the City of Milwaukee Historic Preservation Commission is a member of the City of Milwaukee East Side Architectural Review Board, and a Trustee of the Milwaukee Art Museum.

In July 2009 Bryant married Cecelia I. Gore, also a Milwaukee native. Gore, the Executive Director of the Brewers Community Foundation, Inc., previously had positions as program director of the  Jane Pettit foundation and before that with the old Wisconsin Gas company. Like her husband, she has served on a number of boards over the years, with the Milwaukee Public Library, Menomonee Valley Partners, Marcus Center, and as board chair of the Alverno Alumnae Association and an Alverno College/Trustee. Together the couple qualifies as one of Milwaukee’s power couples.

The two married  at Mt. Zion Missionary Baptist Church. Visitors to the reception following at the home enjoyed fireworks, presumably on loan from Summerfest. Among those in attendance were former House Confidential honorees and fellow North Point South residents Eric Vogel and his wife Megan Holbrook.

How Milwaukee Is It? The residence is about 2 miles from City Hall via the Lakefront. 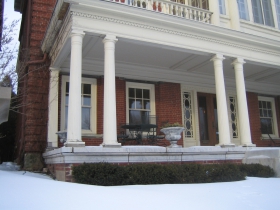 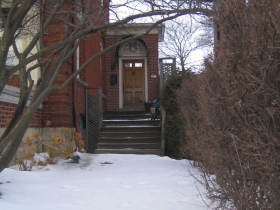 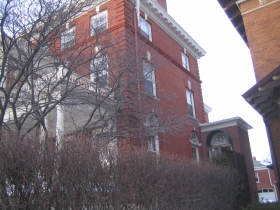 Back in the News: Journal Sentinel Ads Will Drive Stories? by Bruce Murphy