Why Burke’s Loss Was Inevitable

Burke's impact as a candidate was so negligible that Walker was almost running against himself. He had to hope the Walker lovers outnumbered his haters. 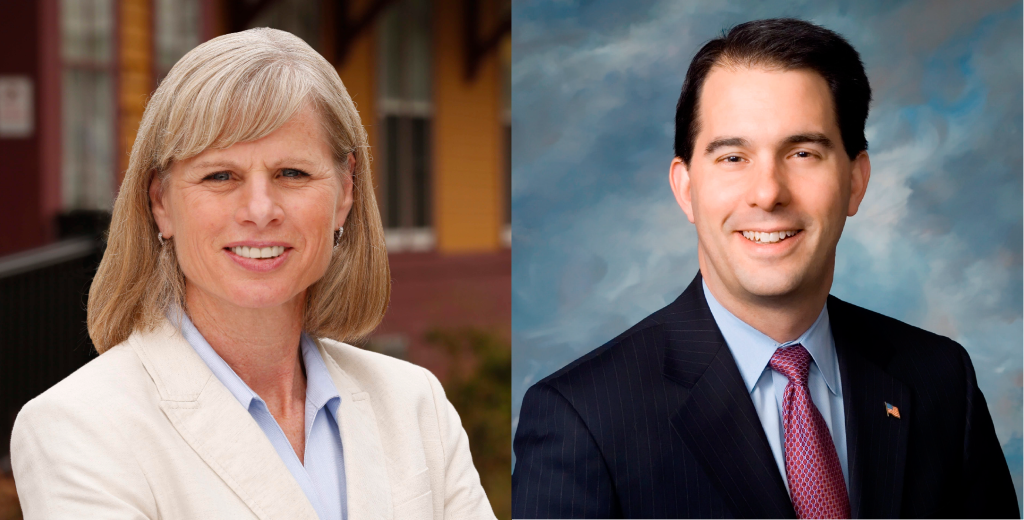 You might call Mary Burke the invisible candidate. It’s almost as though there was no one running against Gov. Scott Walker. Walker is so polarizing that he completely overshadowed his Democratic challenger, leaving the governor in the position of running against himself. He had to hope the Walker that people love got at least one more vote than the Walker people hate. Mission accomplished.

The Marquette Law School poll has surveyed voters nine times since mid-May and its stunning how little things changed. Back in May the two candidates were dead even among registered voters, with 46 percent each. Yet at that point fully 51 percent of respondents said they didn’t know enough about Burke to have an opinion of her. But it didn’t matter. For most voters it was just about one question: are you for or against Walker?

Five months later, little had changed. The final MU poll, released last Wednesday, found 83 percent of people had by now formed an opinion of Burke and most of them (45 percent) had a negative opinion, compared to just 22 percent in May. In short, the percent of people with an unfavorable opinion of Burke had more than doubled. Yet among registered voters she was in basically the same place, with 45 percent of the vote, compared to 46 percent for Walker.

Most of the drama of the MU polls has been all about its projection of which voters are likely to turn out, Democrat or Republican, and how that would drive the final vote. And that went up and down, from Burke with a 2.1 percent advantage among likely voters in late August to Walker’s seven point advantage in the final poll.

But meanwhile the survey results varied far less among registered voters: In the nine MU polls since May, Walker averaged a slim 1.3 percent lead over Burke. For all the hot air expended and all the gazillions spent, the needle never seemed to budge in this race.

The St. Norbert College Strategic Research Institute took a different approach in its poll, completed on October 21, and asked an open-ended question as to why people favored either candidate. Some 40 percent of those favoring Walker did so because they like him, his policies, his values while another 22 percent favored the governor because of his policies on the budget/deficit/taxes.

In Burke’s case a stunning 61 percent of those who favored her did so because they don’t like Walker and his policies. Burke herself barely registered, with only 7 percent of those favoring her saying it was because they liked Burke or her policies and just five percent of her supporters backing her because of her business background/experience. Burke’s business resume, supposedly her great advantage, had a negligible impact in the race.

The latter was probably a help to Burke in withstanding the “October Surprise” of the campaign, the accusations that she had been forced out of Trek because of questions about her performance. Given how few people were voting for her because of her business background, this story may not hurt her much.

That aside, however, Burke’s invisibility as a candidate was a huge problem. If most of your supporters are only turning out because they hate Walker, that suggests you may do very well with Democrats, but not very well with independents. It’s possible for a Democrat to win without carrying the majority of independents, but only if there is a huge turnout of Democrats as in the 2012 election. Clearly that didn’t happen. In fact, it looks like the Republican enthusiasm and turnout surpassed that of Democrats. That’s what happens when their candidate is so weak.

Real Clear Politics called it a toss-up with Walker at 47.5 percent and Burke at 45.3 percent.  The liberal leaning Daily Kos had Walker up 51.6 percent to 48.4 percent.

They all may have underestimated Walker’s margin, but they all picked the right horse.

One week later MU released its final poll showing a seven point advantage for Walker and the media across the state jumped all over the poll. Five days later, YouGov, which has been polling every Senate, House and governor’s race for the CBS News/New York Times Battleground Tracker, released a poll showing only a 2 point margin for Walker. There was barely a ripple in the media in response.

Why does MU dominate the reporting on polls?  No group polls on the election as frequently as Marquette, so that certainly helps it. Then there’s the pedigree of Charles Franklin, who does the polls for Marquette. Franklin co-founded Pollster.com, which became an award-winning site for nonpartisan polling analysis and has been a member of the ABC News election-night analysis team since 2002.

St. Norbert’s pollster, David Wegge, is far less known, but founded its survey center in 1983 and has been doing polls of Wisconsin voters since 1980. “I have a lot of respect for them,” says Franklin. “They’ve been polling Wisconsin for a long time and have a good track record.”

Franklin points to St. Norbert’s rating by 538.com, which ranks the accuracy of polling operations across the nation. Among some 200 pollsters, St. Norbert gets a “B plus” grade while Marquette gets only a “B” and YouGov gets a “C.”  In short, there’s no reason to think Franklin is necessarily doing more accurate polls.

But one of Marquette Law School’s huge advantages is its connection with the state’s largest newspaper, the Milwaukee Journal Sentinel. The law school now gives fellowships to reporters from the JS, which have gone to Craig Gilbert and others. The law school hired former JS reporter Alan Borsuk as a senior fellow, but Borsuk meanwhile continues to do a weekly column with the newspaper.

Good things have resulted from this partnership: For instance, Gilbert has had the freedom to do some interesting research and stories on the partisan divide in Wisconsin. But the cozy relationship here might also help explain why the MU poll gets front-page headlines in the JS while the St. Norbert or YouGov poll are barely reported. And because the JS is the state’s largest newspaper, its decision to give MU so much prominence naturally tends to bring along the rest of the media.

That’s a problem. I suspect Franklin would agree that no one pollster should be so dominant in this state. As the research of Nate Silver (for 538.com) and others has repeatedly shown, every pollster has certain strengths and weaknesses and you get much more accurate results with an analysis that combines all the polls. You also get more information: St. Norbert’s asked interesting questions that weren’t included in the MU poll.

A combined analysis also tends to smooth out the results, so there is less of those dramatic jumps or declines in how the candidates are doing. The media’s fixation on MU’s polls gives readers more drama — and helps cement the JS partnership with MU — but it’s not always the best way to serve readers.

-One thing St. Norbert’s survey asked and MU didn’t was how many voters supported libertarian Robert Burke, and the answer was about one percent. That might explain why a Republican-connected group was running ads touting the fact that Burke supports the legalization of marijuana. Since Mary Burke only supports medical marijuana, some zealous pot advocates might have switched their vote from one Burke to the other.

-St. Norbert’s poll also found a majority felt Walker won his debates with Burke, by 47 to 33 percent, though 60 percent of respondents didn’t watch either debate.

39 thoughts on “Murphy’s Law: Why Burke’s Loss Was Inevitable”