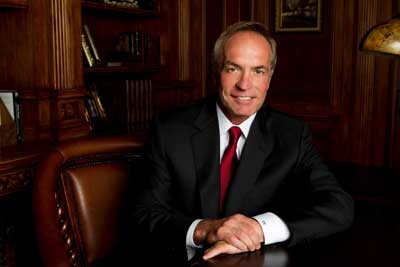 Life is good for Chris Cline. Forbes ranks him as the 339th wealthiest person in America, with a net worth of $1.9 billion. He owns a 150-acre estate in Beckley, West Virginia and a 34,000 square foot ocean front mansion in Palm Beach, Florida. He also owns the 164-foot luxury yacht he’s dubbed Mine Games, which has five staterooms and a two-person submarine. He dated his neighbor Elin Nordegren, the ex-wife of Tiger Woods, for a year until she called it off mid-2014.

As the name of his yacht suggests, Cline made his money in mining, mostly coal mines, but he also owns Gogebic Taconite, or GTac, a Florida-based company seeking permits to construct an open pit iron mine in the scenically spectacular Penokee Hills of Iron and Ashland Counties in Wisconsin’s North Woods. The recent disclosure that GTac contributed $700,000 to the Wisconsin Club for Growth, which in turn ran ads supporting Gov. Scott Walker, has raised questions about how much political influence was exerted behind closed doors to pass legislation clearing the way for this iron mine. The ferrous mining bill (Act 1), passed in March 2013, and largely written by GTac, seriously weakened Wisconsin’s environmental regulations and eliminated the contested case hearing where citizens could challenge the mine permit.

This was the way Cline learned to do business in the coalfields of Appalachia and Illinois: keep a low public profile while exercising power over government. Can a company like GTac, with no iron mining experience, construct one of the world’s largest open pit mines at the headwaters of the Bad River watershed without harming its plentiful waters flowing into Lake Superior? If Cline’s long track record in coal mining, and Gtac’s past history is any indication, Wisconsin residents have cause for concern. 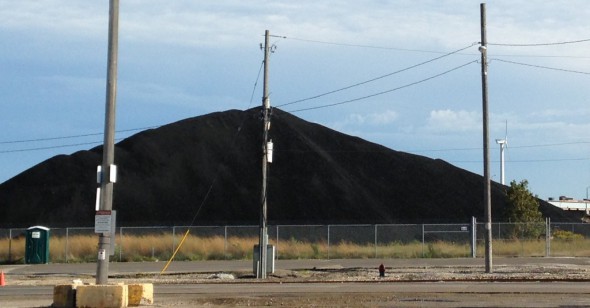 Coal pile, with the Bay View turbine in the background. Photo by Dave Reid.

Chris Cline comes from a coal mining family in Beckley, West Virginia. His grandfather mined coal with a pickax a century ago. His father would pay young Chris a penny a bag to excavate dirt from under the front porch. His corporate bio says that in 1980, Chris, at age 22, followed in the footsteps of his grandfather and father and began working as an underground coal miner in southern West Virginia and “quickly moved into management.” His father, meanwhile, had bought out a mining partner’s shares in a coal mine to give Cline when he was 21 years old. By 1990, Chris Cline had formed his energy and development group, the Cline Resource and Development Group.

Cline went on to develop extensive coal mining, processing and transportation facilities in Appalachia and the Illinois Basin. According to Bloomberg Markets Magazine, Cline “became a billionaire by betting on a dirty fuel the world can’t get enough of.”

His corporate bio says Cline “learned to use unique tools to motivate his workforce to develop and run low-cost mining operations,” without specifying what those tools were. In 1999 he closed down a West Virginia mine when workers voted to join a union. He then reopened the mine without union workers. (Cline declined to do an interview or answer questions for this story.)

In 2003 Cline shifted its investment from declining Appalachian coal reserves to much cheaper Illinois Basin coal. That was the year new federal regulations went into effect requiring power plants to install scrubbers to reduce sulfur dioxide emissions. This created a demand for high-sulfur Appalachian coal that could now be used by plants with the new scrubbing technology. This made Cline a billionaire and allowed him to expand his coal business. By 2009 Cline had acquired more than 3 billion tons of coal in southern and central Illinois. Bloomberg Markets Magazine dubbed Chris Cline as the “New King Coal.”

However, the extraction of coal from underground longwall mining causes subsidence that damages farmland and disrupts surface and groundwater resources. For example, at Cline’s Shay 1 mine in Macoupin County, IL, the subsidence has completely altered drainage patterns of subsided lands. Citizens Against Longwall Mining (CALM) has described this as “a bathtub effect where lands that previously drained will fill up with standing water.”

The Milwaukee Journal Sentinel has reported that the Illinois Environmental Protection Agency accused one of Cline’s companies of delaying the cleanup of groundwater contamination at its Shay 1 mine in Macoupin, Ill. It is one of four mines in Illinois owned by Chris Cline and his Foresight Energy company (which he formed in 2006). Altogether, these mines have violated effluent standards in their wastewater permit 53 times over the past three years, according to EPA records.

But Cline’s environmental track record is far worse than 53 permit violations. According to Devon Cupery, one of the producers of the documentary film, “Wisconsin’s Mining Standoff,” Cline’s coal mines in West Virginia and Illinois have been cited for over 8,000 federal safety violations since 2004. More than 2,300 were “significant and substantial” violations with the potential for injury, illness or death.

Cline, however, told Bloomberg Markets Magazine that government efforts to reduce U.S. greenhouse gas emissions from burning coal are misplaced. When he learned that his children’s teachers in Palm Beach, Florida had shown Al Gore’s film, An Inconvenient Truth, he asked them to distribute literature that showed climate change may be caused by clusters of sunspots or the Earth wobbling on its axis, not just carbon. When they refused, citing the lack of scientific support for such theories, he complained to school fundraisers. “As far as the social acceptability of coal, I like to think I’m part of supplying the cheapest energy in America.”

Cline told a Bloomberg reporter that Massey Energy’s CEO Don Blankenship, who headed the company during the Upper Big Branch Mine disaster that occurred in April 2010 , was one of the coal industry’s “most talented leaders…  Don thinks his convictions are morally correct and follows them.” The coal dust explosion at the Upper Big Branch Mine killed 29 miners and was the worst coal mining disaster in 40 years. An independent commission appointed by West Virginia Governor Manchin concluded that Massey “operated its mines in a profoundly reckless manner… and 29 miners paid with their lives. ”

The report also concluded that Massey used its power “to attempt to control West Virginia’s political system” and its oversight agencies.  Politicians were afraid to oppose the company because it “was willing to spend vast amounts of money to influence elections.”

That same approach has been followed by Cline, with tremendous success.

As early as the 1950s and 1960s, political scientists used the term “regulatory capture” to describe the situation where a regulatory agency abandons its responsibility to serve the public interest and becomes the servant of corporate interests that dominate the industry it is supposed to regulate. Scholars of both the left (Gabriel Kolko) and the right (George Stigler) challenged the prevailing assumption of a neutral regulator or public servant. Their studies showed a widespread pattern where “regulations are routinely and predictably ‘captured’ and manipulated to serve the interests of those who are supposed to be subject to them, or the bureaucrats and legislators who write or control them,” as Amitai Etzioni has written.

West Virginia has long been a state where coal mining companies used legal strategies and donations to politicians to help them evade or stall or weaken regulations. Meanwhile, charitable donations like the Cline Family Foundation’s $5 million gift to West Virginia University’s School of Medicine and Department of Intercollegiate Athletics helps to soften any opposition to the adverse effects of mining.

Cline exported this style of politics to Illinois after he moved into mining there.The Illinois Times has reported that mining companies owned by Cline have contributed thousands of dollars to a Democratic political committee controlled by one of the state’s top mining regulators. These contributions were made while Cline’s companies were seeking coal mining permits from the Illinois Department of Natural Resources.

Between 2006 and the present, three of Cline’s companies – Foresight Energy, Macoupin Energy and Hillsboro Energy – have contributed a combined total of more than $1.5 million to Illinois politicians including Governor Pat Quinn, House Speaker Michael Madigan and Illinois Supreme Court justice Mary Jane Theis. Will Reynolds, a former chair of the Illinois Sierra Club told the media  “there should be a federal investigation into whether the Cline companies got special treatment in permitting and safety because of campaign contributions. It looks like money was used to buy favors.”

Cline had expanded his reach by creating Foresight Energy in 2006, which  in turn, is a wholly owned subsidiary of Foresight Reserves, a privately held company. In 2007, Riverstone Holdings, a private equity firm specializing in energy and power projects, became a minority owner of Foresight Reserves. Riverstone, in turn, is part of the Carlyle Group, the third largest private equity firm in the world. The Economist magazine describes the Carlyle Group as “deeply embedded in the iron triangle where industry, government and the military converge” in a way that recalls President Eisenhower’s warning about the threat to democracy from the “military-industrial complex”

3 thoughts on “The Man Behind Wisconsin’s Iron Mine”