The beer and music flowed and there was a great turnout, all captured in our photos.

Cathedral Square welcomed in the 5th annual Milwaukee Oktoberfest this past weekend, presented by Swarmm Events and Milwaukee County Parks. The Sprecher Beer Garden made its last appearance of the year, tapping the ceremonial 1st keg on Friday evening, offering free beer to the first attendees.

In addition to the food and brews, this year’s three-day event (through Sunday) featured a Miss Oktoberfest competition, brat eating contests, wiener dog races, a stein-hoisting competition, keg bowling and a Sunday afternoon Green and Gold Packer Tailgate that kept the crowd on the edge of their seats to the very last seconds of the game.

Event-goer’s hoisted up their “das boots” and steins and celebrated to the live music of the Mike Schneider Band, Pat McCurdy, the Jeff Winard Band and the Brewhaus Polka Kings. Proceeds from this year’s event will benefit the Hunger Task Force.

Michael Sampson, the co-owner of Swarmm events, was thrilled with the good weather and good turnout. “Thank you to the City of Milwaukee for coming out and supporting us in Cathedral Square Park,” he told Urban Milwaukee Dial. “Looking forward to Milwaukee Oktoberfest in 2015.”

Our photos capture all the fun. 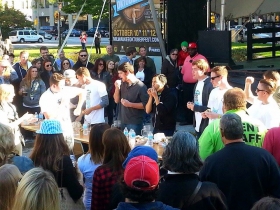 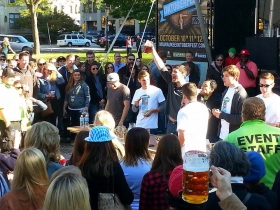 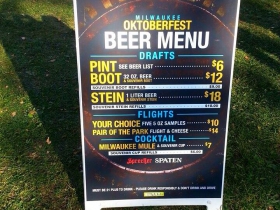 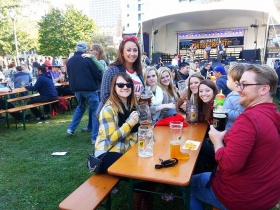 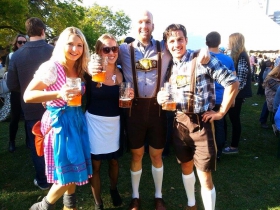 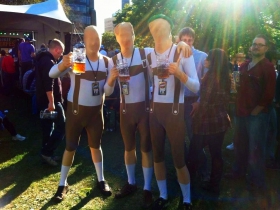