Does Milwaukee Need a Fashion Incubator?

Downtown activist Beth Weirick is leading the charge to create one in or near the Third Ward. 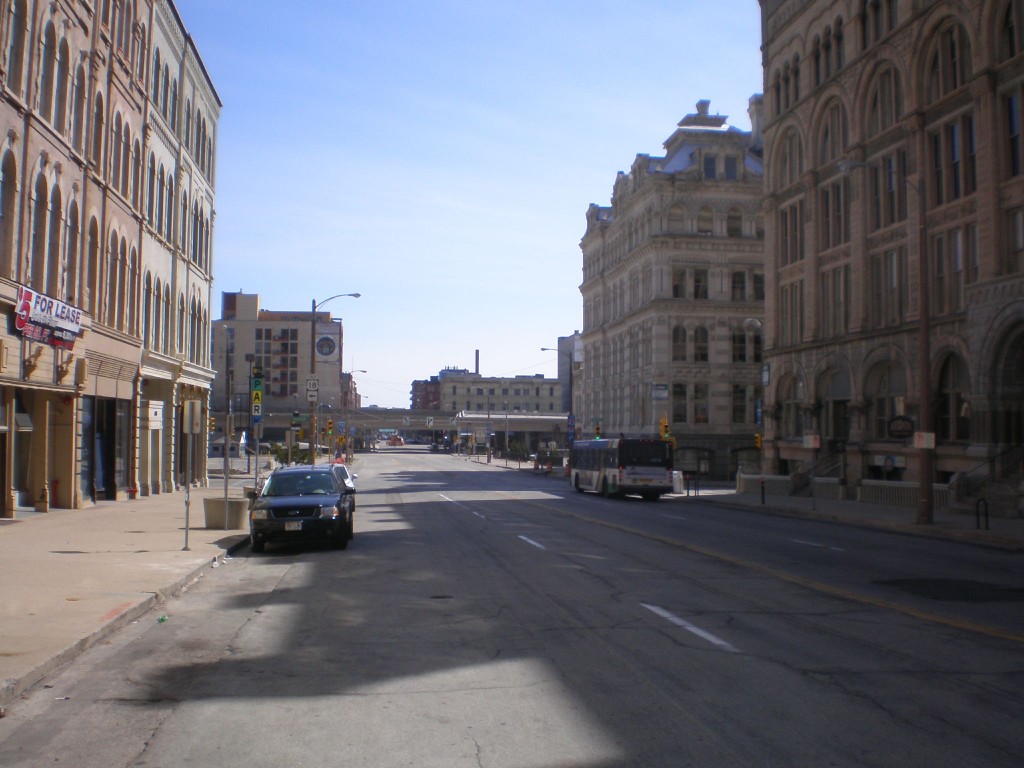 The incubator could be located along this stretch of Broadway.

Milwaukee’s Third Ward has been steadily turning into a budding arts-centric community for at least the last 10 years. This not a brand new image for the neighborhood, however, considering the Milwaukee Institute of Arts and Design has been steadily yielding art and artists from Erie Street since the mid 1970’s. That combined heritage has helped inspire a downtown activist, along with boutique owners, designers, and other Milwaukee fashion people, to consider the creation of a fashion incubator in or near the Third Ward.

While still very much in the theoretical stage, the idea has already generated excited chatter among those concerned with the fashion scene around town. The incubator would be, essentially, an open, studio-type space where young designers would have an opportunity to do their work and forward their craft in a progressive, nourishing environment with likeminded people.

The one generating much of the energy at this point is Beth Weirick, CEO of Milwaukee Downtown, and leader of Business Improvement District (BID) #21 since its inception in 1998. In her mind, with all of the recent steam gathering around artisanal and locally owned business and niche markets (who isn’t saying “Buy Local”?), it only makes sense that that mindset would translate to fashion retail.

“Milwaukee has a rich history of ‘makers’ and a history of quality with an authentic, individualistic sort of style that carries over to the world of fashion,” she says.

An industrious, do-it-yourself ethos does permeate many facets of Milwaukee’s youthful culture. A big problem, however, for young professionals hoping to establish a name for themselves, particularly artists, is getting started—making connections to more experienced people in their field, honing their style, forming their brand, and so on. Getting their foot in the door, so to speak.

“How do you take your line, get connected with sewers and fabrics and finishers, translate your design into a product that can be brought to a test market, and find that test market while also keeping in mind the paradigm of bringing a product to the marketplace for the best value?” Weirick asks. She feels an incubator could help address this major question for young, independent people in the fashion world.

Stephanie Sherman was once in that position herself. “I’d always loved fashion and wanted to open my own store. I wanted to be a stakeholder,” Sherman says. This led her and her partner, Carrie Arrouet, to take the plunge together, happening upon a space in the Third Ward. Lela Boutique opened its doors in 2003 and is still located at 321 N. Broadway today.

Although Sherman sold her share of Lela to her partner around two years ago, she is still passionately involved in Milwaukee fashion and says that around four or five months ago, she was itching for “that next thing”. That’s when she heard about the idea of a fashion incubator, which she envisions as “sort of a Public Market for fashion”.

“Designers, all said, are artists,” she notes. “They require encouragement and nourishment and sometimes a little help en route to the marketplace.” Sherman sees the incubator as a way to connect the small fry to larger business resources in order to take the next step in their career.

Weirick, too, is focused on the fashion incubator as a means to the business end of fashion and design. The focus is ultimately on bringing young designers and their designs to market.

This brings up the financial reality of the incubator. “Of course,” Weirick says, “there would have to be an upfront fee, albeit a reasonable one, to help provide the kind of constructive environment that novice fashion people normally would not have access to.”

The intent would be to take baby steps: Weirick has in mind a small ecosystem of maybe four to six designers and their materials. Aside from the obvious financial advantage of starting small, the quality of help offered to these young designers would be improved by testing the waters on a small scale before taking on anything too daunting. “These young designers need to understand the true ramifications of the creative as well as the financial side of fashion design.

“And there is also the legal aspect: understanding things like patents, cost of materials, et cetera. How to make their craft sustainable for the marketplace.”

The eventual goal for Weirick is to not only have a creative space for designers and sewers and finishers, but to also have a retail operation for those designers to streamline their products directly to a test market: “This would help enliven street front retail in Milwaukee while at the same time helping nurture young artists; while there is already so much reinvestment into Downtown and the Third Ward going on, this seems like a great idea.”

Both Weirick and Sherman mentioned tourism as well. The incubator’s Downtown or Third Ward location gives it great proximity to hotels, and visitors to the city often shop while on vacation or business trips. Why not offer out-of-towners something wholly local, something they couldn’t get anywhere else besides Milwaukee?

As for the location, Weirick says the focus would likely be on Broadway, which is coming to be considered the heart of Milwaukee’s “Fashion District” in the Third Ward. Along Broadway there are empty warehouse and street front properties available, with convenient proximity to many other attractions. The owner of the building at E. Michigan St. and N. Broadway is open to housing the incubator, Weirick says. Another site under consideration is a four-story building at 608 N. Broadway, Patrice Procopio told the Milwaukee Journal Sentinel.  Procopio operated Third Coast Style, a boutique at 514 N. Water St. that sold locally designed fashions and that she hopes to re-open at some point.

An incubator also could complement a separate campaign to revive the art of sewing in Milwaukee, Sandy Schumaker, president of Mequon-based Roeming Industries Inc., told the Journal Sentinel. She is leading a group that is considering forming a local chapter of The Makers Coalition, a Minneapolis-based group that created a training course for sewers and seemstresses, and who in turn would serve both industrial companies and fashion designers.

Ultimately, the proposed fashion incubator could provide a sort of microcosm for the larger fashion marketplace. On an individual level, inexperienced fashion people would have an opportunity to germinate their craft in a reliable space that may not otherwise be available to them. They would also gain an expedited track to retail. But for Weirick, it isn’t just the culture of fashion in Milwaukee that would get a boost, but the city as a whole.

“In a broader sense,” she notes, “we are hoping this would provide yet another great opportunity to celebrate the rich diversity that already exists in our city.”

2 thoughts on “Does Milwaukee Need a Fashion Incubator?”