The changes on south 2nd are welcome, but when will the city start creating protected bike lanes?

By Dave Schlabowske, Bike Federation of Wisconsin - Oct 3rd, 2014 12:57 pm
Get a daily rundown of the top stories on Urban Milwaukee 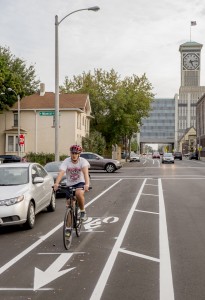 With no fanfare, parties or media conference, the City of Milwaukee Department of Public Works has quietly added buffered bike lanes to the resurfacing project on S 2nd Street between Scott and National. Given Walkers Point’s status as the “It Neighborhood” of the moment and the flood of great new bars and restaurants opening along S. 2nd, perhaps city officials did not feel buffered bike lanes warranted any hoopla.

The road south of National was not reconstructed at that time, so without the ability to move curbs, that left a roadway cross section with a 15 ft wide motor vehicle lane next to the regular 5 ft bike lane and the 8 ft parking lane. Wide motor vehicle travel lanes typically induce speeding, and I heard plenty of complaints about that from business owners when I worked for the city. This resurfacing project did not allow city officials to move curbs either, but they did put in high-performance pavement markings and the buffer zone. The new, narrower motor vehicle lanes and the buffered bike lane seemed to slow traffic, from what I observed while taking photographs for this story, but the real test will be in speed studies.

While it’s great that the city is improving bike lanes as a matter of course given the overwhelming support for more complete streets in Milwaukee, I had to wonder if city technicians considered piloting a protected bike lane on this project. There is, after all,  room for one. It would have been possible to put the bike lane next to the curb with a buffer lane between the parking lane and the motor vehicle travel lane. They might even have tried using flexible bollards to remind people not to park next to the curb.

If they had done this, the protected lanes would have to transition back to the normal position outside the parking lane in order to align with the bike lanes north of National Ave. and south of Scott St. I asked Kristin Bennett, the City Bicycle and Pedestrian Coordinator that question and this was here response:

The modified street striping went in about three weeks ago following the City’s High Impact Paving Program project on S. 2nd Street between National and Scott.  The modification to the pavement markings used existing roadway space to provide a more generous parking lane (which will help during winter months when snow/ice builds along the curb line), the buffered bike lane versus just a standard bike lane, and reduced width travel lanes that are now a typical 11’ travel lane width. 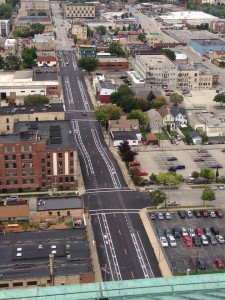 I’m glad to hear the city considered using protected bike lanes and had a logical reason for not doing so.  The city deserves kudos for upping their game on 2nd Street, but I wouldn’t be doing my job if I didn’t advocate for more and push the envelope a little. Given the proactive stance Milwaukee DPW is taking, I have high hopes we will see new protected lanes soon.

My vote is for either Michigan Avenue (pull the on-street parking on one side at least) from 6th St. to Lincoln Memorial Drive, Kibourn from Water to Prospect, or possibly Van Buren from Brady to Kilbourn. I think Van Buren could be put on a similar road diet like S. 2nd Street, to provide the extra room that protected bike lanes need.

Get out there and enjoy the new ride on 2nd and let me know what you think. Do you feel better with the buffer?