In “The Good Father,” Artful Mastery of On-Stage Chemistry

At the Milwaukee Chamber Theater, an unexpected pregnancy bridges the class divide in Ireland.

Jonathan Wainwright as Tim and Laura Gray as Jane. Photo by Mark Frohna.

Married in real life, Laura Gray and Jonathan Wainwright are portraying strangers whose casual sex at a friend’s bash leads to consequences neither party can fully believe. Call it a romantic comedy or a romantic drama (since both fit). But be assured the two performers are providing the virtuoso acting coupling of the season in “The Good Father,” a Midwest premiere that runs through Oct. 12 at the Milwaukee Chamber Theatre’s studio space at the Broadway Theater Center.

Even non-romantics will be taken in with recognition and laughter, while romantics will discover that blunt anatomical language can become as finely tuned as Shakespeare sonnets in the dialogue of Irish playwright Christian O’Reilly.

The actors provide a high level of byplay and moment-by-moment details that aren’t naked in the script. Tim, the house painter who can’t believe his sudden involvement in a pregnancy, has monologues about his mindset that require Jane, the more posh and quicker-minded partner, to listen more than verbalize. Then Jane has to lash out with superiority of status and Tim has to prove that, while he may be the salt of the workingman earth, he is not so dull that he doesn’t know when he is being skewered. Then Tim listens for long stretches as Jane vents. Then Tim deflects the barbs and embarrasses Jane.

The ping-pong continues. Jane, who has scorned the feminine wiles of her friends so eager for respectable families, suddenly embodies those wiles. Tim, who insists he is an ordinary and even slightly thick Irish bloke, proves slyly clever at psychological manipulation. All this requires intense concentration and a deft touch by the actors, who must prime the audience for both unexpected grins and sadness. This unfolds in a series of vignettes that challenge the actors’ emotional continuity – and they answer the bell.

Somewhere there are linguistic experts who will pick apart tiny flaws in how the American actors handle the Irish dialect and tonality – but not here. Gray and Wainwright have clearly steeped themselves in the characters’ rhythms and the Dublin environment, all the while prioritizing their theatrical performances.

What happens physically between the two is no more than G-rated, but the bold language humorously turns human plumbing into a plot device and romantic banter that would make pre-Code audiences in Hollywood blush.

Jonathan Wainwright as Tim and Laura Gray as Jane. Photo by Mark Frohna.

Director C. Michael Wright and his technical staging experts have fashioned a small jewel. But all that would fade away were it not for Gray and Wainwright’ attention to detail and to one another. There are times O’Reilly is almost too swept up in his own cleverness with words, but the actors keep it in control and gently brush his dialogue into real moments.

The emotional arc of the first act is expertly realized as Tim and Jane develop from unknowns to trapped partners to curiously needy. The arc of the short second act is shakier and leans heavily on these actors’ previously established believability, though it does offer surprises that are essential to our emotions at the close.

Patrons will rightly applaud the funny, stirring, individualistic language gifts of O’Reilly. They may marvel at what great roles these two actors have stumbled into, because “The Good Father” is indeed a worthy find. What they will not see and can hardly imagine is these are not great roles just lying there for anyone to grab. These had to be mined out with analysis, repetitive rehearsing and mutual acceptance. It’s first class acting work. 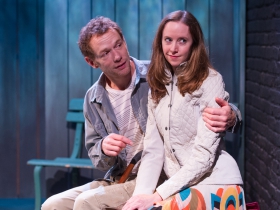 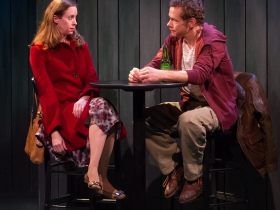 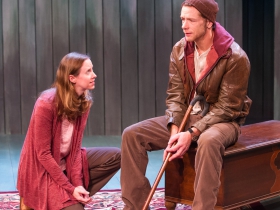 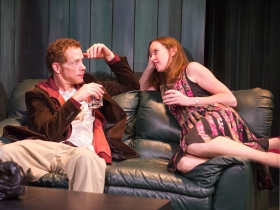 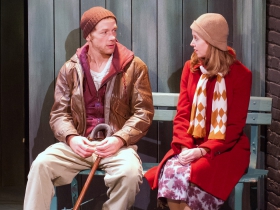