Republican base of elderly, rural voters most affected.

Wisconsin’s voter ID law has always been about voter suppression, Democrats say. Nonsense, reply Republicans. Voter ID “protects the integrity of every single vote,” as Gov. Scott Walker told onlookers when he signed the bill into law in 2011.

Now that a federal appeals court has insisted that the voter ID law be in effect in the November elections, we learn of a hitherto unexpected consequence — absentee ballots must include a copy of the voter’s ID.

Only Texas and Kansas have a similar requirement. And it is absurd.

Consider this: the State of Wisconsin has within its power the ability to determine for itself whether an absentee ballot is legitimate. Yet voters will still be required to provide information the state already knows.

When a citizen applies for a state-issued ID or driver’s license at a DMV office, he or she receives a receipt. The identification is later mailed to the address on the card. Previously, the card would be issued right on the spot. But the mailing requirement was added at the request of Republicans, of course, to prevent fraud.

Same goes for an absentee ballot. The ballot is mailed to the voter’s address, and is delivered to the same mailbox as the ID. It should not be too difficult to connect the absentee voter with the ID used to register to vote. But now, the state will require that a copy of a voter’s ID be mailed back with the ballot.

This might cause more voter suppression than the Democrats ever guessed. The Republicans must have anticipated this. You can tell, because they never said a word about it.

Here’s why: even in this technological age, many voters do not have access to a copying machine.

For elderly voters, especially those in remote areas, the effort to find someplace to get a copy of an ID could involve a considerable expense of time and money, when you factor in transportation costs, copying fees and loss of productivity. All for a copy of a document that, like the ballot, had been mailed by the state to the address used by the registered voter.

I’m certain there are people throughout Wisconsin who will find this new requirement onerous, and will just decide not to vote. But Walker and his Republican cronies were counting on the suppression to take its greatest effect in urbanized areas like Milwaukee.

Think again — most everybody in the city lives within close range of a copier. And believe me, candidates will be happy to arrange a copy for a homebound voter here.

Things will be much different in rural areas. Many absentee voters there may decide not to cast a ballot if they can’t get a copy of their ID. (Do you have a copy of your ID on hand right now?) And many of those rural voters are likely to have cast their ballots for Republican candidates.

We are taught to be careful what we wish for. This onerous rule might come back to bite the Republicans who sponsored it. 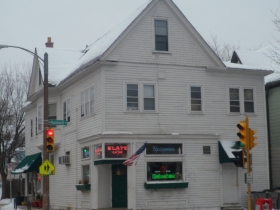 Doors Open Milwaukee hosts its fifth iteration this weekend with events throughout the city. New to the tour is the Mayor’s office at City Hall, which will serve as the headquarters of the event September 20-21 from 10 a.m. to 5 p.m. This year the event, sponsored by Historic Milwaukee, Inc., will also include a photo challenge sponsored by Art’s Cameras Plus. … Also this weekend is the 130th anniversary of the building that houses the Uptowner, 1032 E. Center St. It is believed to be the oldest continuously operating tavern in the City of Milwaukee, selling “medicinal alcohol” when it served as a “pharmacy” during prohibition. For the past 30 years, this “charm school,” and “home of the beautiful people” has been owned by Steve Johnson. The event will run all day Saturday and Sunday and will include a pig and corn roast and Italian beef along with carnival games and all sorts of activities. … If you want to give your dog a chance to experience 40 acres of art and running space, Lynden Sculpture Gardens in the Village of River Hills is hosting its monthly Dog Days Saturday. Members and hounds are admitted free. Your dog gets in free with your admission to the grounds. This is a lovely alternative to Katherine Kearney Carpenter Park in Mequon, where dogs are simply starving for culture. … Sunday is the grand re-opening of Koppa’s Farwell Foods, 1949 N. Farwell Ave. The place has been under new ownership for the past year, and there has been considerable rearranging done to the interior of the quirky east side shop. For instance, there is now a walk-in beer cooler. Free beer and wine samples will be available, along with ice cream and other treats. 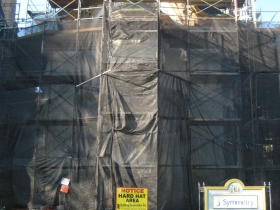 While you’re at Koppa’s, take a look across the street at the work being done on the Suminski Weiss funeral home parking lot. Some months ago, I noted a retaining wall there that was failing where it “connected” with Comet Cafe to the north. The entire wall is being reconstructed at this time, hopefully properly. … Symmetry Corp., the Milwaukee-based information technology company, is renovating its historic Judge Jason Downer house at 1201 N. Prospect Ave. The somewhat Gothic building is draped in black fabric for now. Halloween is on the way! … On the north end of the block, work continues on the Bloodgood Residence in a remodeling done by Uihlein Wilson Architects for the Bradley Foundation.

5 thoughts on “Plenty of Horne: Absentee Ballot ID Requirement Could Backfire on Republicans”