The Battle Over the Wheel Tax

Local governments want to pass them for road maintenance, but state legislators may try to stop this.

When it comes to local governments across Wisconsin collecting a controversial “wheel tax” – a registration fee for vehicles weighing less than 8,000 pounds – to help maintain their streets and highways, the score is tied.

Wheel taxes are added to the $75 annual state registration fee for cars and light trucks. Despite its mixed record, the tax is resurfacing as a possible option as local officials struggle to pay maintenance bills from the last snowy winter. Potholes caused by the freeze-and-thaw cycles of Wisconsin’s long and unpredictable winters are a problem in Southeastern Wisconsin and many other areas of the state. Local governments worry about the next winter, and don’t know how much future aid they can count on from state government.

For example, the Appleton City Council could vote on Sept. 3 to implement a $20 annual wheel tax, which would start 90 days after the council vote. If approved, Appleton’s wheel tax would raise $1.7 million – cash that would have to be used to replace special assessments which have grown unpopular, according to Appleton Post Crescent reporter Nick Penzenstadler. The city spends about $5 million per year on road repairs.

And, a $10-per-vehicle wheel tax could be voted on Sept. 9 by Chippewa County supervisors. Officials there said winter highway maintenance normally costs about $1.2 million per year, but costs jumped to $2.1 million in 2013. They also don’t have money to deal with any snowstorms before Jan. 1. Chippewa County officials project a $10-per-vehicle tax would bring in up to $530,000 a year, but propose to “sunset” – or end – in five years.

Votes on Appleton and Chippewa County wheel taxes will be cast against a backdrop of uncertainty over how to pay for state and local transportation programs. State government borrowed almost $1 billion to avoid delaying highway, bridge and other transportation programs in the two-year budget that ends June 30. And the Wisconsin Taxpayers Alliance has done this math: Keeping state transportation funding at the 2013 level for 10 years would result in a deficit totaling $2 billion. 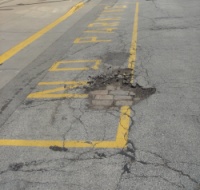 A pothole that goes back generations (Photo by Dave Reid)

That political uncertainly has been noticed by local officials who are reconsidering a wheel tax. That’s why Chippewa County’s $10 wheel tax would last only five years, County Executive Frank Pascarella said last week. “It does allow us the opportunity to plan for funding the winter maintenance without impacting other county services,” Pascarella says. “Since this is a service delivery challenge for a number of counties, it does allow the Legislature time to address and provide counties the flexibility and ability within their operating budgets to provide this service without compromising, eliminating or ignoring other transportation or necessary and required … priorities.”

Nobody is pretending that wheel taxes are a permanent solution, however. “The wheel tax is an option for communities to consider that would provide a partial solution to the current challenges in funding the costs of maintaining local roads,” says Curt Witynski, chief lobbyist for the League of Wisconsin Municipalities. “Historically, it has not been used because local officials are loathe to add to the local tax burden.”

Kyle Christianson, chief lobbyist for the Wisconsin Counties Association agrees: “The wheel tax is only a partial solution, as it is inadequate to cover the growing demands of local transportation systems.”

One sign of how controversial wheel taxes remain: After St. Croix County adopted its $10 tax in 2008, state Republican Rep. Dean Knudson – a former mayor of Hudson – introduced a bill requiring that local governments obtain voter approval in a referendum before enacting a wheel tax. That bill died, but Knudson is a member of the Legislature’s Finance Committee. He may try again.

Steven Walters is senior producer for the non-profit public affairs channel WisconsinEye. Contact him at stevenscwalters@gmail.com

4 thoughts on “The State of Politics: The Battle Over the Wheel Tax”