The annual Lynden Sculpture Garden party draws lots of notables and raises money to maintain its fantastic works of art.

For many years the annual August Bradley Sculpture Garden Party was the only opportunity for the public to visit the 40-acre River Hills sculpture collection assembled by the late Peg Bradley from 1962 until her death in 1978.

The annual open house was arranged, in part, to permit the Bradley Family Foundation, the garden’s owner, to maintain tax-exempt status as a private family foundation.

After the 2001 death of Peg Bradley’s daughter Jane Pettit, the foundation trustees began a much more robust program of civic involvement and artistic programming, changing the name of the property to Lynden Sculpture Garden, and opening the facility to the public on a year-round basis in 2009.

“Lynden” is a tribute to Lynde Bradley, the brother of Peg’s husband Harry Bradley, and his co-founder at Allen Bradley Co. When the couple bought this 1860s farmstead in 1926, they named it “Lynden.”

Today, the $23 million-asset Bradley Family Foundation (which is not under any circumstances to be confused with the mammoth, conservative  Lynde and Harry Bradley Foundation) is headed by Peg Bradley’s granddaughter Sarah O. Zimmerman, a native Milwaukeean and Yale Law School graduate.

The Garden Party tradition continues, but has now been recast as “Harry & Peg Bradley’s Backyard Barbeque.”

The third annual installment of the $65 per person fundraiser was held Thursday, August 20th from 5 to 8 p.m., and drew over 100 attendees, including Zimmerman, her husband and children, to the bucolic setting on a warm and overcast evening to dine on salads and pulled pork from Braise, beer from Brenner Brewing Company, and ice cream from Sassy Cow, along with gourmet popcorn from Old Maid’s Popcorn.
Jane Pettit’s children David V. Uihlein, Jr. and his sister Lynde Uihlein (Sarah’s mother) were in the crowd visiting with the well-wishers and meeting new folks. Dozens of children ran about the grounds enhancing the beauty of the spectacle and the joy of the evening.

The place has never looked better. The lawns were green and unstressed, the trees well-trimmed, the invasive plants largely conquered and the recent addition of prairie plants showed great promise.

The sculptures are virtually all world class, and all appear to be pristinely and continuously maintained — an essential for outdoor sculptures in this severe environment.

It costs $10,000 per week just to keep the place operating. The price of neglect could be catastrophic.

“We had to scrap one piece,” David Uihlein said. “Completely scrap it. It was made of Cor-Ten steel.”

This “weathering steel” was a miracle product of the 1960s. You didn’t have to paint it, it would just rust itself a nice coat, and that would be that.

Alas, the rough beauty of the material made it a favorite with artists, but it turns out Cor-Ten was not itself rustproof — water could infiltrate pockets and voids — and special care must be taken to see that welds match the steel. In short, the material works fine in Madrid and Albuquerque, but not in Wisconsin. [The facade of the 788 N. Jefferson St. building was originally of Cor-Ten.]

With this sobering experience at hand, the need for conservation funds for the sculpture garden is paramount, Uihlein explains.

This is understandable: a Moore Two-Piece Reclining Figure similar to one in the garden recently sold for $4.1 million. A David Smith brought $23.8 million, (more than the foundation’s total assets) so it is easy to see the importance in keeping these works in good shape. The task is just as continuous but far more complicated than painting a ship, since a ship is steel and pretty much a unit. The sculptures can be elaborate and range from bronze and granite on the easy side of the maintenance scale to painted polyester and fiberglass, which are a bit more fussy. Steel always rusts, of course.

In addition to the sculpture garden, the foundation also administers the Mary Nohl grants. Both tasks are the job of Polly Morris, who is paid $98,843 per year for 50 hours a week work, although she routinely does more. My nickname for her is “Polly Morphous,” since her job takes on so many shapes.

Morris is a hand-on administrator, and is not one to spend her time glad handing with the crowd. Instead she made herself useful, working the foodservice line, and greeting each visitor with her serving spoon in hand.

Among those on hand were House Confidential honoree Joe Pabst, who is also an Uihlein cousin and Zimmerman neighbor in his spare time. John Eastberg, the genial head of the Pabst Mansion was there with Jim Pabst, the chairman of Pabst Farms, who came down from Neenah on their foundation’s business. He could use a couple fundraisers to keep all of his barns in order.

Like most guests, he arrived by shuttle bus from the Brown Deer East Park and Ride Lot. Exceptions were this writer, who pedaled by bicycle, and Marty Hintz and Pam Percy, neighbors from down the street, who know how to poke their way through the back yards to get to Lynden. They were there as neighbors and as note-gatherers for their Boris and Doris column in the Shepherd Express. Nicholas Frank came up from Riverwest to pour beer, at $5 a pop, while Mike Brenner offered samples of two of his beers from his newly opened establishment. He admitted a hoppy Weiss was not his favorite, although it certainly did the trick, and also had a smoky rauchbier available. A silent auction drew spirited bids, including $2,500 for a dinner for 12 at Lynden. A lovely basket of beer-related items was donated by Lucy Saunders, with the teaser that Cooking Classes will soon join the list of activities at the gardens. Lucy’s husband Tom Geilfuss stayed home further east down Brown Deer Road, where he missed a grand opportunity to mingle with fellow University School alumni and students. Heck, he sees enough of them working there as it is.

Writer and gallery owner Debra Brehmer, who gave a presentation at the Mary Nohl forum moderated by Polly Morris, also strolled the grounds.

As Zimmerman surveyed the party toward the evening’s end, she was clearly pleased by the event and the direction the organization is taking as it expands its community profile. The Nohl Foundation Grants in particular, have been recognized as a significant catalyst for the local fine arts community. As for her role as president of Lynden’s board, Zimmerman says simply, “it’s an honor.” 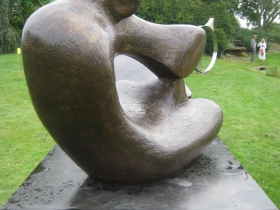 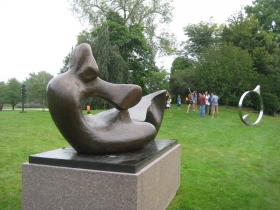 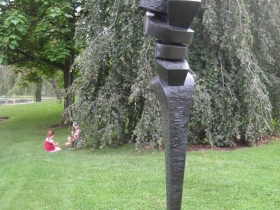 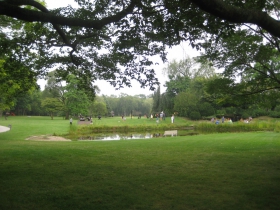 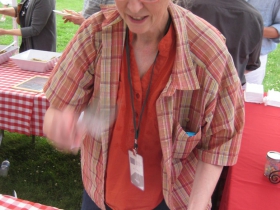 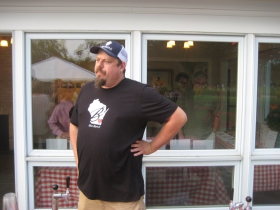 Rittenhouse Will Stand Trial on All Charges by Megan Hart