Greenery Instead of Gizmos

A new photo exhibit in Riverwest challenges our obsession with technology and calls for a deeper bond with nature.

Henry David Thoreau once wrote, “Men have become the tools of their tools.”

Walden, Thoreau’s 1854 manifesto of spiritual discovery written from his cabin in the Massachusetts woodlands, advocated for environmental preservation and challenged the need for unnecessary and distracting technological developments. 160 years after the soot stained industrial revolution, its themes of nature, simplicity, and self-reliance have become even more relevant. With the onset of the telephone, automobile, television, and Internet, our dependence on machines has never been greater.

Speaking from his house in Riverwest, Larsen has largely taken on the philosophies of Thoreau. He challenges our love affair with the machine and seeks to rekindle our relationship with nature. His photo exhibition, a series of portraits entitled “Organic Technology,” is set to be unveiled August 15 at the Cocoon Room vintage shop and art gallery.

The six foot tall Larsen is dressed as far from a 19th century environmentalist as one can imagine; fully clad in a slinky turquoise leotard, his lower half is covered by dark skinny jeans. A pair of chunky black eyeglasses frames his face, and he sports a braided rattail that slithers down around his left ear. His bouffant of straw colored curls bounce excitedly as he chats about his first foray into the gallery world.

“It all started with my roommate Trish and I playing around with different shots. One photo in particular involved her standing with a potted plant, vines trickling down the sides of her body. It looked as if the plant was engulfing her. I liked the photo and thought of using it to make a statement about my generation.”

Born in 1993, Larsen grew up during the Internet age; a period of rapid technological advancement that quickly changed the way we engage in everyday activities and interact. Social media outlets such as Facebook, Twitter, and texting are becoming more common than face-to-face communication. Constantly being connected through a smartphone or laptop has become the norm, inundating us with information but distracting us from our immediate reality. For Larsen, living through a screen has been an unsettling transition.

“When my great grandma died I was notified through a text message. That is a perfect example of how we are abusing this technology. We’re eliminating such a natural human behavior.”

Each photograph depicts one model and one plant; some with mosses, vines, flowers, or ferns. Each photo serves to represent one aspect of the digital age. Some illustrate the consuming nature of what Larsen calls “electronic companions,” while others are more abstract. One photograph depicts a sandy haired boy who appears to be ensnared by the roots of his leafy watch, while another shows a sallow woman clutching a flowerpot boom box teeming with vegetation.

The one photo of Larsen is a simple shot; he looks off quietly into the distance, holding a sprinkling of succulents in his hands. All the models were either friends or people who became interested in the project. Larsen jokingly admits to having chased down a particularly interesting looking person on the sidewalk that he was desperate to include.

“In the photos, it looks very out of place that these people have plants wrapped around them. We are so used to seeing inorganic things attached to us; but when it’s organic like vines or flowers, it’s shocking.”

The exhibition has gone through several stages of development. At first, all the greenery was bought or came from Larsen’s own family of houseplants. As the series moved along he began borrowing plants from friends and neighbors and even searched for fresh moss along the banks of the Milwaukee River. Larsen brought the idea of a photography exhibition to Cocoon Room purveyors Amanda Mills, Sheila Teruty, and Rae Büth in early spring. They were instantly on board.

“The girls at Cocoon are really open-minded and have been completely supportive of my creative vision. They really dug my ideas and I feel really comfortable with them. I also really love the shows they put on.”

Cocoon Room, located at 820 E. Locust Street, will play host to the photo series’ grand unveiling August 15, and keep the work on display for about a month. The night will be complete with live music, snacks, refreshments, and plenty of vintage shopping for show-goers to peruse as they weave through the space.

Organic Technology is certainly a far cry from the 19th century shores of Walden Pond where Thoreau sought nature’s rebirth and admonished industrialization, but the two men share a very similar goal and warning; our society might be walking blindly into a future controlled only its own technological creations. For Larsen, the exhibition served as his own rebirth.

“This project was a rejuvenation of my creative self. For the past couple of years I haven’t been focusing on what makes me happy. Now I want to continue to do shows and make statements through my art.”

Opening night of the exhibition will be Friday August 15, 7pm-10pm at Cocoon Room, 820 E. Locust Street. 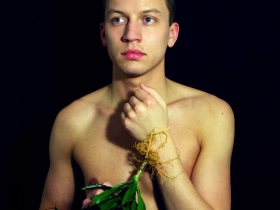 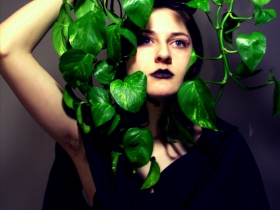 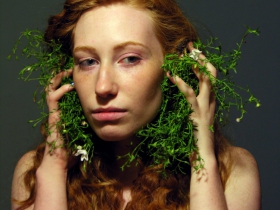