“You grow up, you have kids and everything changes”

Farence Rogers is looking forward to just one thing, his son graduating from college.

By Jabril Faraj, Milwaukee Neighborhood News Service - Aug 14th, 2014 09:39 am
Get a daily rundown of the top stories on Urban Milwaukee 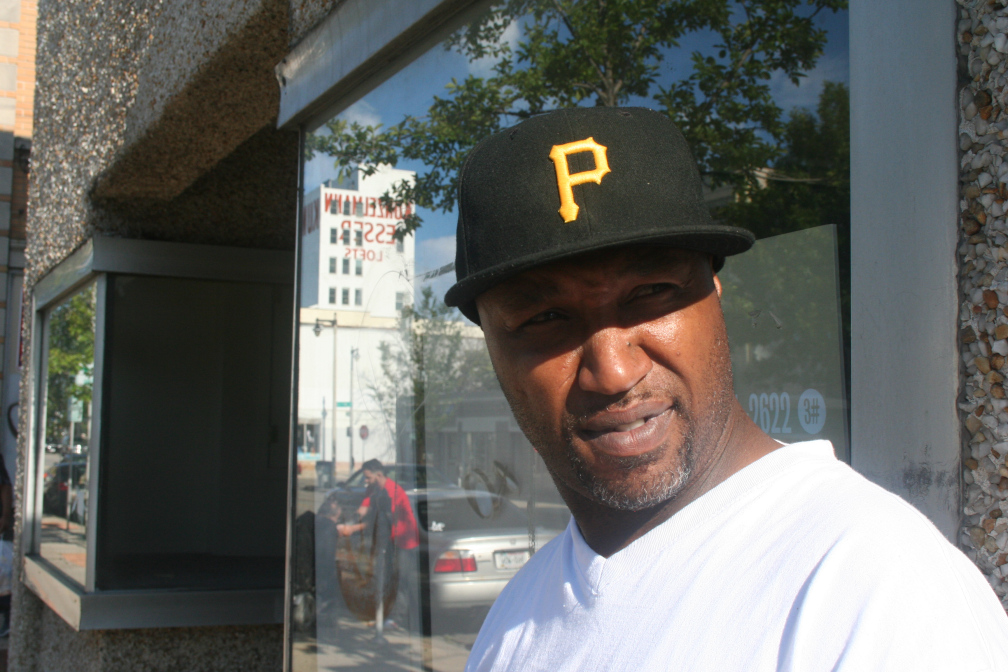 Farence Rogers stands in front of a shop window near 9th & Mitchell.

Farence Rogers walks down Historic Mitchell Street on his way back home from El Rey Foods.

Rogers has lived in Milwaukee almost all his life but he hasn’t just stuck to one part of the city – he’s lived on the north, west and south sides. “This city is not that big so why limit yourself?” says Rogers. “You’ve gotta be able to mingle with everybody.”

After attending Washington High School and playing football on a team that won the City Conference Championship, Rogers wasn’t quite athletic enough to earn a college scholarship so he decided to join the Marine Corps. “I figured, you know, I’d go to the military, get some experience, put on some weight, learn, and then I would go to school after that.”

But two weeks after he joined, the First Gulf War began. Then, his time with the Marines ended when he fractured his foot. Still, Rogers says he wouldn’t do it any differently. “I wouldn’t change that experience for nothing, man,” he says. “It made me who I am today.”

What was the most valuable part? “Being on my own. Being on my own, having to grow up. That’s pretty much why I went to the Marines to begin with. You’re no longer underneath your parents, you know. You’ve gotta fend for yourself and do your own thing.”

So, Rogers came back to Milwaukee and ended up going back to school, graduating from MATC with a degree in welding. His career in welding, however, was short lived. “I did that for a few years. I got out of that because I almost got blown up at work. Now, my profession has been wait staff for the last – man, since ’98. Done everything from fine dining to weddings, banquets, you name it.”

Rogers says his favorite part about the job, other than meeting new people, is helping them decide what to drink. “I’m big into wine. A friend of mine’s a sommelier – he lives out in Colorado – so, I’ve been learning everything I know about wine from him for the last six years.”

“He’s got a story for every bottle of wine he opens. You’ve got to be able to break the ice with people and, you know, communicate. And they might just be there for a nice meal but you give them something that they can learn something about and take home with them and, who knows, they tell their friends about it and then they come back and see. The whole thing about being a waiter is return business.”

In fact, Rogers’ friend, who lives in Vail, has encouraged him to get out to Colorado. He says he’s considered it but he won’t be leaving quite yet. “Milwaukee is, there’ve just been times I’ve wanted to get out of here…wanted to maybe go back to California or somewhere,” says Rogers. “If it wasn’t for me having a son who just turned 18 I probably would’ve been gone a long time ago.”

That decision was a no-brainer for Rogers. “I couldn’t leave. I don’t really know my dad – in my whole 42 years – so, I wasn’t gonna leave him,” he said. “I was engaged, things didn’t work out…I wanted to go then but he was like 3 years old around that time and I chose to stay and I don’t regret it now.”

Rogers says watching his son grow up has been the “happiest time of [his] life.”

Now, his son is at the University of Wisconsin-Madison on an academic scholarship and Rogers says he couldn’t be more proud. “The fruit of all of that labor, him going to school and, you know… it all paid off, sticking around paid off, man.”

Just recently, Roger told his son how proud he was for working hard, getting through school and continuing right on to college. “I was like, ‘You know what, I give you much respect for what you’re doing right now,’ because a lot of kids are not out here doing that.”

And, despite his sons accomplishments, Rogers is worried for Milwaukee, in general. “It’s so bad out here right now with just… people don’t have any respect,” he says. “Just the amount of senseless killings – kids getting shot. I’ve never seen this many kids being murdered in all the time I’ve been in this city. It seems like there’s a whole generation of kids that have lost, just, common respect – respect for life, respect for themselves, other people.”

That’s not the way Rogers was raised, he says, and that, in his mind, the strength of any community starts with the parents. “It starts at home, man. You know, if it’s not happening at home, then its probably not gonna happen. If you don’t teach your kid to respect others and manners – just common sense – you never know. They’re gonna get out here and do anything cause they just don’t… they don’t care. A lot of people say that, you know, you’ve got to love these kids because that’s the only thing that’s gonna turn them around, show them some love. And maybe that’s what we’ve got to do because, right now, ain’t nothing working.”

Because, Rogers says, if you don’t show your kids love and guidance, someone else will. “You’ve gotta let your kids know you love ‘em, man, and that you’re here for them.”

Rogers knows a bit about that. And, at this point, he’s just looking forward to one thing. “Him graduating college… [the] lord blessing me with enough days to see [my son] graduate.”

One thought on “Milwaukee Stories: “You grow up, you have kids and everything changes””