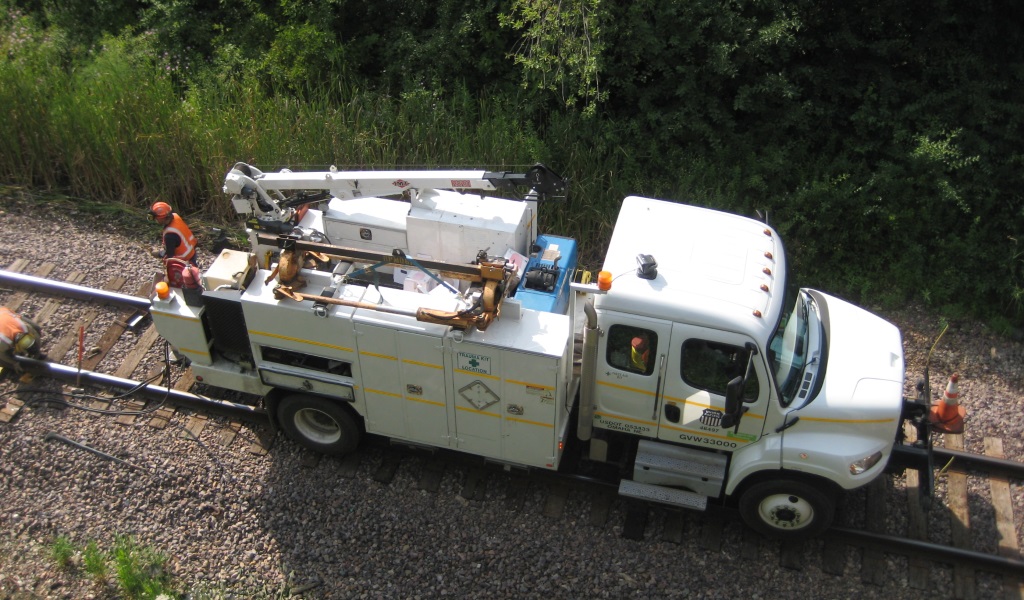 A Union Pacific crew welds new track on the company’s Lakeshore rail line as part of a $6.1 capital improvements program in Wisconsin. this view is from the Yates Rd. bridge in Fox Point. Photo by Michael Horne.

Anybody travelling I-43 north of Bender Road is familiar with the rusty, unattractive east-west railroad bridge that crosses the freeway. A few hundred yards to the east, the rails take a northerly turn and more-or-less parallel the freeway north to Sheboygan. Much of the land between the freeway and railroad, including a huge parcel between Donges Bay and Mequon Roads owned by Herb Kohl, is unbuildable, and would ideally be suited for a bicycle trail.

In fact, the entire corridor would provide a bike/hike transportation option between Milwaukee, the North Shore suburbs and Ozaukee County. Today, the only access between Milwaukee and Ozaukee east of the freeway is on N. Port Washington Road, two miles inland at the county line. Geography has much to do with the lack of connectivity in this area, since the topography is studded with 90-foot deep ravines that are difficult to bridge, and are very desirable for residences to perch upon.

The ravine system is the reason why a portion of the Village of Bayside is located in Ozaukee County instead of being part of Mequon—the investment to link the isolated Fairy Chasm South district with the Mequon mainland would have been prohibitive considering the small population of the area, but it would have been required for public safety reasons.

The only pedestrian bridge in the ravine district was in Fox Point, appropriately enough on Bridge Lane. It was torn down in 2010, which suited some neighbors just fine. Fortunately, a group called Footbridge Friends helped raise money to replace the original span, believed to have been built in 1911.

Fox Point officials held a groundbreaking event August 8th for the construction of the new bridge, which represents a refreshing investment in alternative transportation that other ravine areas should emulate if we are ever to be able to bike the lakefront without taking a two-mile detour each way.

The railroad line itself would be an ideal bike path, but it is still very much in use—for now. Twice a day trains full of coal head north to the Edgewater Generating Station in Sheboygan. Twice a day, empty trains head south to collect more coal from a giant rail yard in Northern Illinois. There is no other traffic on the line.

Still, hauling coal by rail twice daily keeps about 600 trucks off the highways, and it must be a profitable enterprise, since the Union Pacific Railway, which owns the tracks and right of way, is investing $6.1 million on the line for 26 miles of new rail, 62 crossings and 7 switches. The work began in June and is expect to be finished by September. The company says no tax dollars are being used for the improvements. 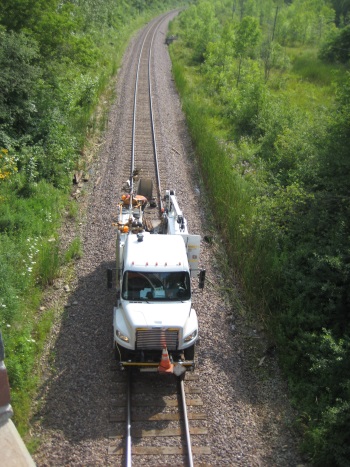 Perhaps that is not for want of trying—the State of Wisconsin Department of Transportation offers two programs to help fund freight railroad improvements in the state. The DOT offers grants and up to 100% loans for qualifying improvements.

But the improvements on the Milwaukee – Sheboygan line would not qualify, it appears.

According to Frank Huntington, Supervisor, Rail Project and Property Management Unit at the Wisconsin Department of Transportation, “It’s generally assumed projects on lines serving unit coal or coke trains to electric utility plants generate a sufficient return to a railroad as to not justify public assistance. I believe this line serves the Edgewater Power Plant, so it is not likely to be eligible for either our grant or loan programs.”

A longer-range issue is the fate of coal-fired plants like Edgewater, which produced over five million tons of CO2 in 2006, and released 212 pounds of mercury into the atmosphere in 2005. Alliant Energy is spending over $1.2 billion in improvements to its plants, including closing some coal burning units. One of the plants at the Edgewater energy station [Unit 4] is slated to be either closed or converted to natural gas by 2018, while the company has invested millions in scrubbers for Unit 5, so it appears the coal train will have some time to run on its shiny new tracks.

Despite the graphic name, a “gut rehab job” is one of the best things that can happen to a building, neighborhood or city. This remodeling process usually preserves the “bones” of a structure while replacing old and worn surfaces, finishes and mechanical systems. It is a true sign that the market has confidence in an area, and we are seeing more and more of these projects in the city, particularly on the East Side, and more recently in Riverwest, which is very good news indeed. 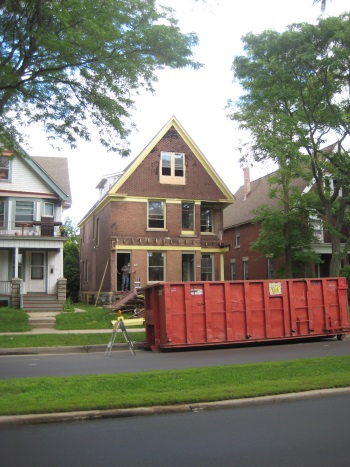 ​A gut-rehab project is underway in the 2500 block of N. Humboldt Blvd. Photo by Michael Horne.

One example is at 2512 N. Humboldt Blvd., a 1904 brick veneer duplex bought earlier this year for $90,000 by SK Management. An old garage on the site has been razed, and a new one is under construction. The home itself is being rehabilitated; recently a carpenter was working on replacing the worn front porch. Soon the handsome home will be available for rent, and will presumably command a premium compared to, say, a very similar home next door that has not been recently remodelled.

There has also been a number of similar projects in the 1500 – 1600 blocks of N. Jefferson and N. Jackson streets, as noted here previously, as well as an ambitious project at 1157 E. Kane Pl. that has transformed a single family home with no garage into a duplex residence—with a garage carved into the building’s facade. A Dumpster was recently delivered to 1132 E. Kane Pl., a 1,548 square foot duplex bought by Yusuf Dahl in February for a rather remarkable sum of $300,000, more than twice the building’s assessed valuation of $122,000.

Dahl, as mentioned in a House Confidential story about former aldermanic candidate Eyon Biddle, is a savvy investor and serial remodeller, so there must be something about the property and neighborhood that prompted him to pay such a dear sum for such an undistinguished house.

That “something” about the property is in the backyard—it’s the Milwaukee River. The “something” about the neighborhood that is inspiring considerable investment includes Kane Commons, a 2008 riverfront project by Julilly Kohler that has sold all units despite beginning construction in the depths of the recession. The only remaining property at the Commons is an undeveloped street side lot that has attracted some interest.

In other good news for the East Side, the former home of restaurateur Sandy D’Amato, a N. Jackson St. “Painted Lady,” sold for $266,000.

Gwen Moore and Chris Moews have tag-teamed it during the final days of the campaign—she for Congress and he for Sheriff. They appeared briefly Saturday at the home of Rev. Andrew Warren and Jerry Edmundson in Whitefish Bay, which the couple shares with their two sons, one of whom seemed to enjoy the affair, and the other who couldn’t wait for all of those adults to get out of the house.

Milwaukee County Democratic Party chair Marlene Ott lent her support to the two candidates, as did Jim Carpenter, who bicycled up from his Diamond Tower condominium. Another attendee was Chris Rockwood, who is challenging Jim Sensenbrenner for his very well gerrymandered seat in Congress.

Sachin Chheda, wearing a Jon Richards for Attorney General shirt was there, but didn’t have much to say. Alarmed by this state of affairs—quite unusual for Chheda—I was able to determine that his silence had to do with the fact that he had quite simply lost his voice. We’ll see if it returns in time for his candidate’s election night party at Casablanca.

A scrolling ad from the NRA Political Victory Fund appeared on Urban Milwaukee faulting Michael Bloomberg for putting money into the campaign of Chris Moews, who is hoping to unseat the sheriff.

“Tell Bloomberg to Stay Out of Milwaukee, Keep David A. Clark as County Sheriff,” the ad reads. This promotion violates one of the key principles of campaign advertising—spell the candidate’s name correctly.

A 40-year-old white male was attacked on the Cass Street playground, 801 E. Pleasant St. on August 7th, in an attempted robbery at 7:50 p.m. This is a rare event in the quiescent neighborhood. According to Jose A. Alba, District 1 Community Liaison Officer, “four black male juveniles” are in custody in relation to the event.

For many years Robert Gerald “Jerry” Peters was a very helpful media source at the Milwaukee Public Library, even while his son Tony Peters was making headlines himself as a drug dealer. Peters died August 6th at 83.

8 thoughts on “Plenty of Horne: For Rail or Trail”