Thousands of athletes take over the lakefront for two days of national races.

Nearly 5,000 athletes from around the country travelled to Milwaukee to compete at the 2014 USA Triathlon Sprint National Championships over the weekend. The event was centered around the Milwaukee Art Museum and Discovery World on Milwaukee’s beautiful lakefront. The Hoan Bridge and Lincoln Memorial Drive were temporarily closed each morning while downtown was given over to competitive running, swimming, and bicycling.

On Sunday, Taylor Knibb and Mike Meehan won the overall titles at the 2014 USA Triathlon Sprint National Championships beating a field of 1,750 finishers. Competing on a 750-meter swim, 20-kilometer bike, 5-kilometer run course, Knibb finished in 1 hour, 2 minutes, 53 seconds, the fastest time in the women’s field. Meehan, an athlete in the 20-24 age group, turned in the fastest overall men’s time on Sunday finishing in 58 minutes 29 seconds.

But not all competitors were out to break records. For many finishing is just as important, and for others, it was apparently about the sharing the ride. While most competitors rode high-end racing bikes, not Andy White. He choose to ride a Bublr Bike, one of the bicycles from Milwaukee’s new bike-sharing system, and a bicycle that weighs nearly 40 lbs at that, during the competition.  He road 20 kilometers at a speed of 15.3 mph, and finished in first place in the mythical “bike-sharing” category. 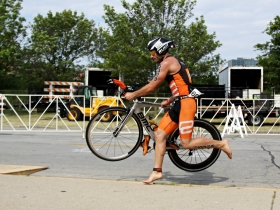 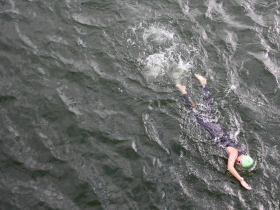 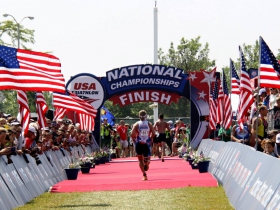 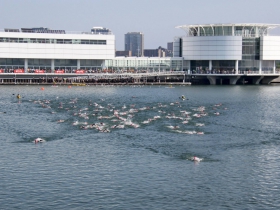 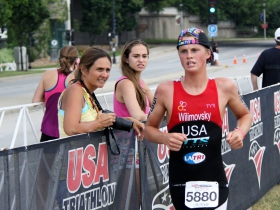 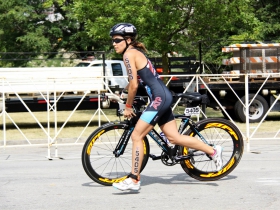