Uninsured rates decline in most states, more so for those “embracing” the legislation, and Wisconsin finds itself in the middle of the pack. 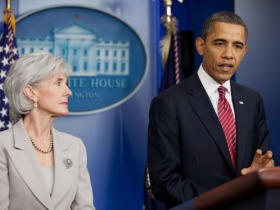 How effective has the Affordable Care Act been in decreasing the ranks of the uninsured around the country and here in Wisconsin? On August 5, Gallup Healthways released its first state-by-state estimates since the provisions setting up health exchanges and encouraging states to expand Medicare took effect at the beginning of this year. These are the first such estimates based on actual polling, rather than economic models. 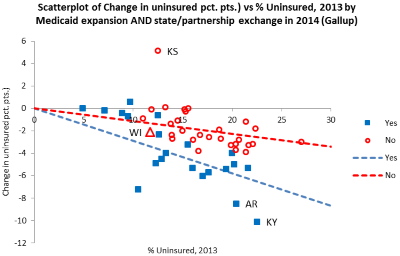 A scatterplot of the state reductions versus last year’s uninsured rates is shown below. States embracing the ACA are shown with solid blue squares. The other states are shown with red circles. The dotted lines represent the trend for each group. Wisconsin is the red triangle.

The individual state results should be treated with a healthy dose of skepticism. Gallup estimates the margin of error is as high as +5 points for small states. Particularly for states that started with a low uninsured rate, any apparent changes may simply reflect sampling error.

With that caution in mind, it is useful to look at the results for several states:

Most states that expanded Medicare also set up their own exchange, but a few relied on the federal system. Availability of health insurance was more dependent on Medicare expansion than a state-specific exchange. After some initial glitches the federal web site worked fairly well, while some state exchanges failed—most notably Oregon’s, but also that of Hawaii and, most surprisingly, Massachusetts. Given this information, why did Gallup not drop the state exchange factor and use only the Medicaid expansion factor in deciding which states “embraced” the ACA?

Apparently, Gallup used the exchange decision as a proxy for the political establishment’s enthusiasm for the ACA. Was the ACA viewed as an opportunity or a threat? A regression analysis of Gallup’s “embrace” variable paints a more accurate picture than one only the Medicaid expansion decision. Rates of success increase if the people responsible for a project believe in it, so long as they are realistic. 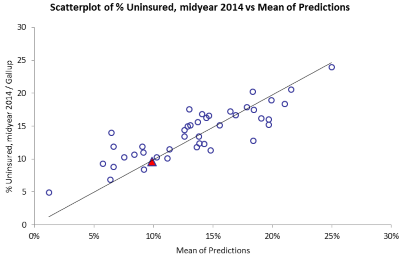 The usefulness of the state exchange decision as a measurement of enthusiasm may not be relevant in the future. Oregon is using the federal exchange because it could not get its own to work. Several other states may switch as well because of web site problems.

Prior to the ACA kicking in, several organizations predicted each state’s rate of decline in the number of uninsured. How accurate were they? The second graph compares the average of predictions from four organizations with Gallup’s polling results. When it comes to the total number of people without insurance, there is overall agreement. Not surprisingly, there is much more variability when it comes to the change in each state. Wisconsin ended up being easy to predict.