McKiernan’s, the Home Base of Bob Donovan

The alderman and mayoral candidate loves hanging out here, safe from those wine-sipping streetcar fans. 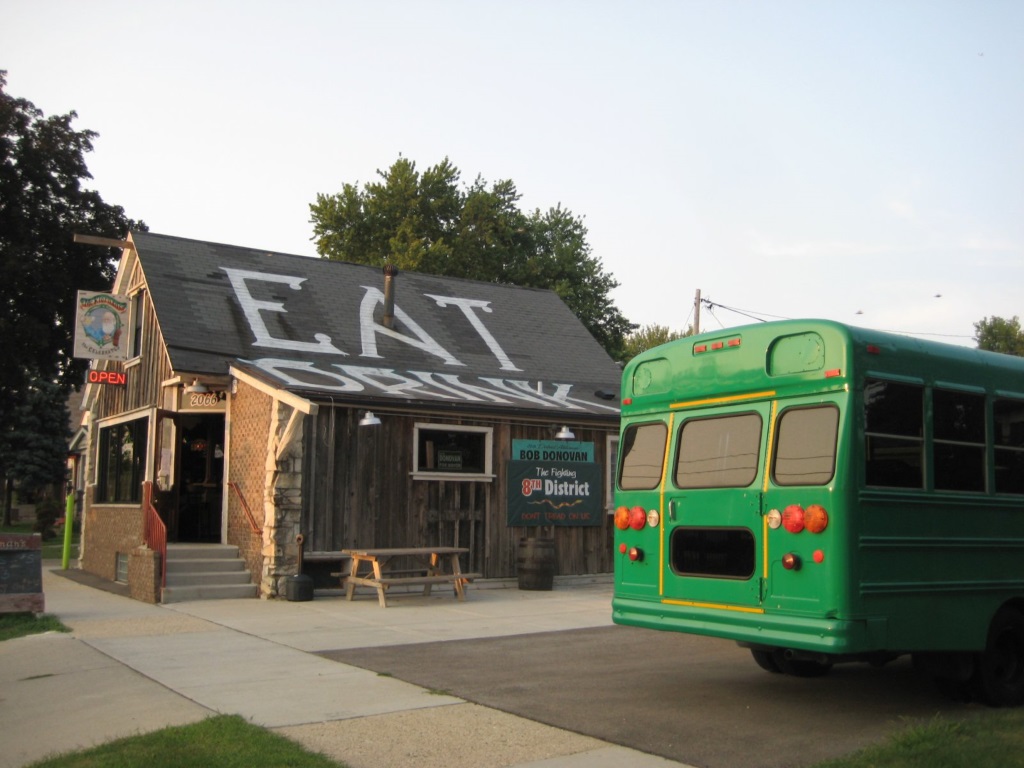 Eat and Drink at McKiernan’s.Photo by Michael Horne.

When he announced his candidacy for Milwaukee mayor on Tuesday, July 29th, Ald. Bob Donovan told the crowd at Serb Hall that his campaign slogan would be “Vote for Bob and have a beer.”

The simple message was that Bob Donovan was a regular guy who could get things done, and then kick back and take it easy. Enough of the “muck and mire of indecision and timidity” that he says characterizes the administration of Mayor Tom Barrett and his wine-drinking sycophants.

On the next evening, the first full day of the nascent campaign ended as have so many of Donovan’s ordinary days with a trip to McKiernan’s Pub at 2066 S. 37th St., a neighborhood bar not far from the home of the alderman, a House Confidential honoree, and his wife, Kathy. She joined him and an associate for a drink in the small frame structure erected in 1900 and cobbled together ever since. 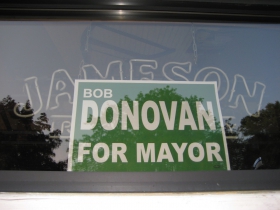 Donovan is clearly no stranger to the place. A “Donovan for Mayor” sign can be seen in the window of the tavern, although its mates have yet to be sighted elsewhere in the community.

An older and more enduring indication of the alderman’s familiarity with the place is seen on the outside of the building where a banner reading “The Fighting 8th District Don’t Tread on Us” is superimposed over one reading “8th District Alderman Bob Donovan” on the south side of the tavern, easily visible from the street.

In the tavern’s side yard is a tour bus, painted green, white and orange. Parked beside the bus is a fiberglass shell of a pleasure boat that somehow has found itself beached on the frontier between Milwaukee and West Milwaukee in an industrial stretch of S. 37th St. Fish have nothing to fear from this craft, this season. But will that tour bus be a vehicle for Donovan to do some barnstorming through the city?

Inside McKiernan’s, Donovan has an easy command of the piney interior. He says he is comfortable here since “it is the only Irish bar in my district.”

Owner Gene McKiernan has operated maybe a dozen bars over the years, usually two or three at a time. When he closes one, he takes the fixtures and decorations and hauls them over to the new one. This accounts for a number of odd and curious items at McKiernan’s, including a washing machine probably found in a barroom basement once upon a time.

Perhaps with a bit of work, the boat could be floated at Barnacle Bud’s, another McKiernan property on the Kinnickinnic River. (He also owns Ducky’s, 3172 S. 8th St. and Victoria’s, 1100 E. Potter St.).

But getting this place ready for operation in 2009 was no joy for McKiernan. As Donovan tells it, the bar had been closed for some time, and its absence was depressing the neighborhood and depriving the alderman of what had once been one of his favorite haunts. “It was a biker bar for a while before closing,” Donovan says, and he sure didn’t need that headache again when it re-opened.

Donovan met McKiernan at Barnacle Bud’s and encouraged him to apply for a license at the S. 37th St. bar. What could go wrong? A couple coats of paint, a little bit of plumbing work — instant tavern!

In fact, it took 13 permits until McKiernan ultimately got his certificate of occupancy for the 25-person capacity bar from the city. 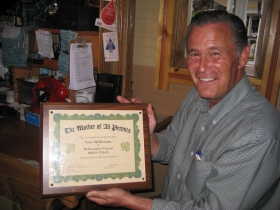 Ald. Donovan displays the “The Mother of All Permits.” Photo by Michael Horne.

Those pointy headed bureaucrats at City Hall! Donovan showed them, and issued a document of his own, which he asked Joe the bartender to take off the wall to show it to me. “Here it is,” Donovan said, “‘The Mother of All Permits.’ I issued it to Gene, and it says ‘he can do whatever the hell he wants.’”

Donovan also showed off a miniature sculpture showing Joe, Gene and the alderman himself with miniatures of their favorite drinks — Jameson for Joe, Crown Royal for Gene, and Lite Beer for everyman Bob. This is Bob Donovan’s world.

The tavern is decorated with 17 non-swivel backed, uncushioned chairs. You are not going to confuse this with a cocktail lounge, that’s for sure. There are 5 gaming machines. Floors of various materials and compositions attest to the age of the structure and its many changes over the years. There is no “No Weapons” sign, and a Jameson flag hangs from the ceiling — as do a number of bras.

This latter touch is a tribute to the Holler House, which has had brassieres hanging from the ceiling for decades. Of course, those busybody pointy headed bureaucrats down at City Hall made Marcy Skowronski take them all down, citing a fire hazard.

“Oh, yeah, says who?” said Donovan, and the bras went back up, spawning a trend that has spread to at least this tavern, and a tribute to the man-of-action who would be mayor. “Long story short: common sense prevailed and the city backed down,” Donovan told an AP reporter. 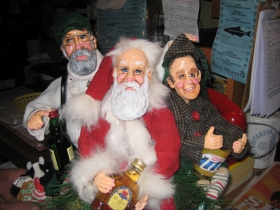 Miniature sculpture showing Joe, Gene and the Ald. Donovan himself with miniatures of their favorite drink. Photo by Michael Horne.

The spotless kitchen is in the rear of the building, and can be viewed through glass windows. The menu covers the range of bar foods, and you can get yourself $5 mussels and a $1.50 PBR silo on Mondays. The bar also offers a full-line of fish fry on Fridays. It should also be noted that the first item on the menu, under the heading of “Wee Plates” is Donovan Fries ($4.00).

Donovan Fries, sure to be included in the next edition of Larousse Gastronomique, consist of “Deep Fried Beer Battered Dill pickles served with Buttermilk Ranch [dressing].” This highlighted appetizer appears to have escaped from State Fair and wound up at McKiernan’s. So might you one day.

The end of Prohibition provided a mini-boom for the revenues of the City of Milwaukee as speakeasies sought to legitimize their operations. In addition to license fees, the city collected permit fees for improvements that needed to be made after more than a decade of looking the other way at the rum holes that dotted the community.

On October 24th, 1933, a certificate of occupancy was granted to Arnold Appelt to operate this place — but only after a few needed plumbing improvements. At the time it was described as an “Old Stand,” meaning it had served alcohol at some time before prohibition, and perhaps throughout the duration of the Noble Experiment.

Appelt had a tavern room, two “table rooms” and a kitchen in the place. The bar was at the north wall, against the alley, as it remains to this day. His apartment was upstairs.

In 1947 Hans Gorn put up an 8 ft x 10 ft addition that was removed in 1958. Gorn also put on a living room addition and kitchen addition in 1955, which survive. The residential area of the tavern, unlike many in Milwaukee, has direct access to the tavern via a stairs right at the end of the bar. The stairs divides the bar room from the “table rooms.”

In 1968 the tavern was operated by Kenneth C. Basile, who sold it to Steve Andrejczak. In 1972 it was “Tommy’s Tap,” operating with a legal non-conforming license. In May 1977, Michael P. Basile, the landlord, was issued a citation forbidding parking on his lot. “Two campers, boat, 3 cars are to be removed at once,” wrote the building inspector. [Today the lot is down to one boat, one bus. That’s progress.]

In 1982 Eugene W. Robertson bought the property, which has long had non-owner-operators, unusual for such a small neighborhood place.

In 1984 it was known as “English Darts South,” operated by Edward P. Malecki. It then became “The Corporation,” owned by Adolph J. Eckert in 1985 before settling down in 1987 as Mel-Rose Gardens, owned by Melvin H. Blank.

In 1988 Diane Hanke proposed a 50-person capacity “Wine Room” at this location, an idea that then, as now, was at least 25 years ahead of its time.

In 1996 it was run as Nick’s Alley, operated by Mary Mawrey. 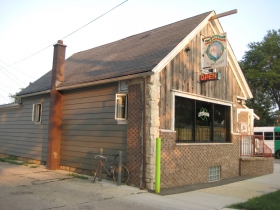 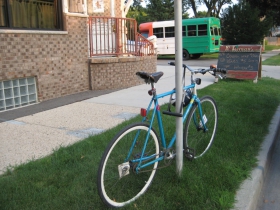 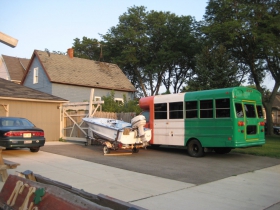 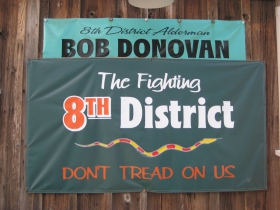 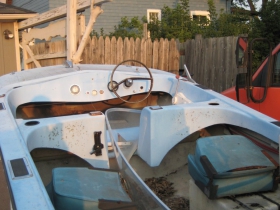 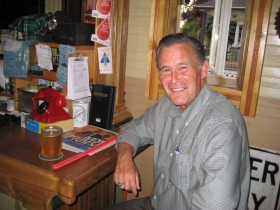 0 thoughts on “Taverns: McKiernan’s, the Home Base of Bob Donovan”