A Guide to Bike Sharrows

West Allis just installed some. You find them all over. How do they differ from bike lanes and how should they be used?

By Dave Schlabowske, Bike Federation of Wisconsin - Aug 1st, 2014 10:02 am
Get a daily rundown of the top stories on Urban Milwaukee

There seems to be an explosion of sharrows, also called shared lane pavement markings, being installed in communities around Wisconsin since they were approved a few years ago by the Federal Highway Administration and now appear in the Manual of Uniform Traffic Control Devices, the bible for traffic engineers.

As with any new traffic control device, there is going to be some initial confusion about what sharrows mean and how to use them. What exactly are sharrows and are they just a poor substitute for bike lanes? Here’s a guide to help you better understand them.

Shared Lane Markings are pavement markings used to indicate a travel lane in which bicycles and automobiles must share the space because there is not enough room for them to fit safely side-by-side. To better understand where and why they are used, we need to look at cross sections of typical roads and required widths for different lanes.

Lets begin with the standard traffic engineering guidance for parking lanes, bike lanes and motor vehicle travel lanes. Engineers can  use their judgement and change these widths one way or the other by a foot or so, but standard widths are recommended:

The image below illustrates a typical cross section for a 48ft wide street. I made this image on Streetmix.net, a cool interactive site that allows you to change the cross section of any street.

Click on the image to open a larger view.

Sharrows are used when a road is an important bike connection but doesn’t have the width required to to add a bike lane. Among other benefits, shared lane markings reinforce the legitimacy of bicycle traffic on the street and can be used to suggest where bicyclists should ride, encouraging people to stay out of the door zone or even take the lane. 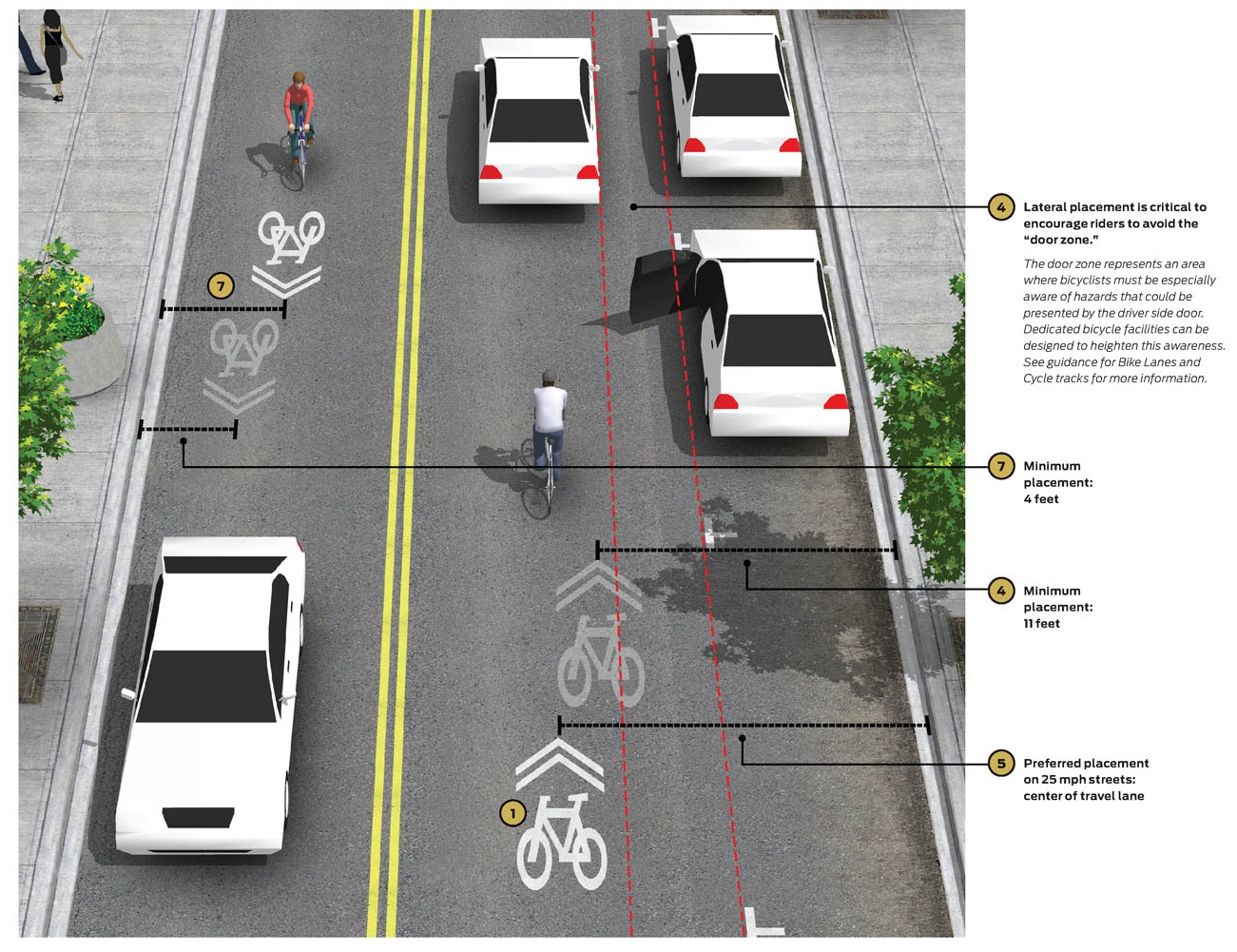 This image from the National Association of City Transportation Officials Guide (the New Testament for traffic engineers), illustrates both minimum and preferred placement options for shared lane pavement markings next to parking lanes and in curb lanes.

The bible  (or at least the Old Testament) of traffic engineering is the Federal Manual of Uniform Traffic Control Devices. It offers the following standards and guidance on shared lane pavement markings:

So sharrows should not be used instead of bike lanes; rather they are used where bike lanes just won’t fit. They can also be used in mixing zones and through intersections to help guide bicycle traffic and remind people in motor vehicle traffic to look for bicycles. And just like any other poorly designed road, if you put sharrows in the wrong place, it can be worse than no bicycle markings at all.

32 thoughts on “Bike Czar: A Guide to Bike Sharrows”