It’s clearly failing black children. Why can’t MPS do as well as other cities in addressing the problem? 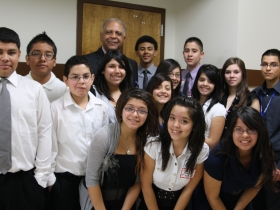 Recently, Milwaukee Public Schools announced it was joining My Brother’s Keeper, a program sponsored by the White House and aimed at males of color. The program aims to recruit mentors who will work to make sure their students are:

The program targets a real crisis. A recent report called Race for Results from the Annie E. Casey Foundation rated Wisconsin dead last when it combined twelve indicators for black children. Six of the 12 indicators directly relate to education. These are listed in the chart below, along with the percentages of black children meeting the standards and Wisconsin’s rank among 47 states with sufficient data.

Of course, Wisconsin consists of much more than Milwaukee, and recent reports indicate that other Wisconsin cities don’t do much better. But with 64% of the state’s black population living in the city, a large portion of the data — and the main challenge to change the situation involves Milwaukee Public Schools.

Unfortunately progress at MPS has been slow, difficult, and halting, despite the efforts of many. Showing considerable courage, MPS joined the large urban districts participating in the National Assessment of Educational Progress (NAEP) math and reading tests for 4th and 8th graders. NAEP has tools that allow one to slice and dice the data in various ways. It is useful to look at what the tests show. 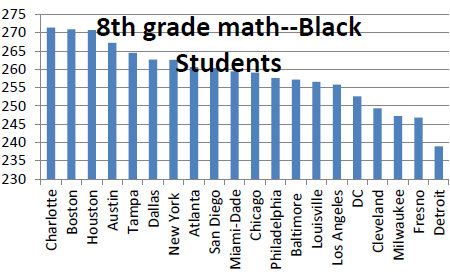 The first chart compares the average scores that black students achieved on the 2013 eighth grade math test for 20 of the 21 participating urban districts. (Albuquerque is missing because of its low enrollment of black students.) As can be seen, MPS rates near the bottom of the districts. Using 4th grade scores or the reading tests does not change the rankings very much.

Nor does the story change much when other ways of slicing the data are used—white students, those qualifying for free and reduced lunch, or those not qualifying rank about as poorly on average. Likewise using fourth grade tests instead of eighth grade or math instead of reading does not substantially change MPS’ position near the bottom of the urban school districts. The next chart shows Milwaukee’s rank on all four tests for both students who qualify for free lunch among 21 districts and those who don’t qualify among 20 districts. One hopes that Milwaukee would aspire to rise to the top rather than simply avoid being at the very bottom. 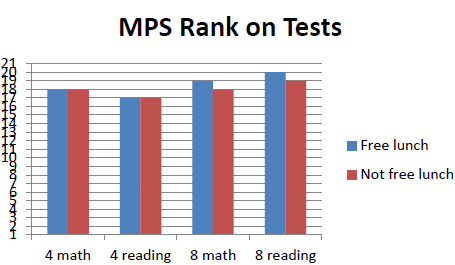 All urban school districts struggle with the problems that come with students whose families are under stress, but some districts do better than others. The next chart compares Milwaukee’s scores over time with Boston, Chicago and Atlanta. While scores tend to jump around, these other cities show both better average scores and more progress than MPS.

Many people have labored to improve MPS and to make sure that most of its students graduate with the skills needed for success in college and the job market. The benefits of greater academic success are many, both for the future of Milwaukee’s children and the future of the region. Milwaukee’s future economic viability depends on having a skilled work force. People without the skills needed to get a good job represent a human tragedy. The danger is that My Brother’s Keeper will join the ranks of well-meaning programs abandoned after a few years for the next new thing. 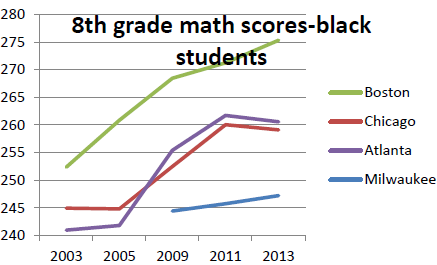 Various theories have been advanced to help explain why Milwaukee has had less success in improving student achievement than other districts. For instance the black migration to the north came late to Milwaukee, just in time to meet the movement of well-paying manufacturing to lower-wage countries, with the result that Milwaukee never developed much of a black middle class. Or, that a side effect of the desegration plan was destroying the neighborhood school, weakening community bonds. Whatever the accuracy of these and the other theories, they don’t suggest a solution.

Can MPS have greater success given the current political climate surrounding it? Unless we look at the sea that MPS swims in, the results of My Brother’s Keeper is likely to turn out as disappointing as previous well-meaning efforts. That sea, I believe, is often  toxic for MPS. Full disclosure: I don’t speak here as disinterested observer, but as someone who served a couple stints as a member of the Milwaukee School Board, including a period where I was in the majority and a period when I was more often in the minority on various issues.

My view is that the “Children Come First” mantra is repeated so often it has become a cliché. In reality adults come first in the big battles. Education policies are often driven by adult concerns about economics, power and ideology—who gets the job, who gets to make the decision, and do we like their politics. Here are recent examples of each but there are many other examples:

Economics: the board’s refusal to allow the recently departed superintendent to explore contracting out food service, which had the potential to free up resources for education.

Power: the proposal for a mayoral takeover of the schools brought forth a bevy of obscure organizations, and some not so obscure, fearful of the potential loss of their ability to influence decisions. Notably none of them attempted to justify their opposition in terms of the effect on student achievement.

Ideology: the recent decision not to allow MPS to issue a call for proposals for new charter schools, driven by an ideological dislike of the national charter organizations expected to respond.

The Milwaukee obsession with vouchers illustrates all three of these concerns. If anything, recent research tells us that a school’s governance is a very weak predictor of student outcomes. Milwaukee has successful district schools, charter schools, and choice schools. Most schools in each category probably fall in the middle. All three categories include schools that should be closed, although it seems easier to close failing charter schools than either district or choice schools.

The school choice program was enacted by the state legislature and is administered by the state Department of Public Education. Yet anyone who runs for the Milwaukee school board encounters numerous people whose only concern is what the candidate thinks about vouchers, not how the candidate intends to improve MPS. On Milwaukee’s East Side four candidates are currently running to fill a vacancy in the state assembly. Three have promised, if elected, to end vouchers. Never mind that they have no chance of succeeding given the makeup of the next legislature.

It is telling that in both Boston and Chicago the mayor is ultimately responsible for the school system. Mayoral control has proven no panacea; success is heavily dependent on how focused the mayor is on student achievement and how willing to resist the pressure to use the schools for adult interests. In the right hands, it can allow a more pragmatic approach to education, as well as bringing under one umbrella the other city departments that play important roles in the success of Milwaukee students. But the chances of such a proposal ever being revived for Milwaukee seem slim, given the forces of opposition to it in this city.