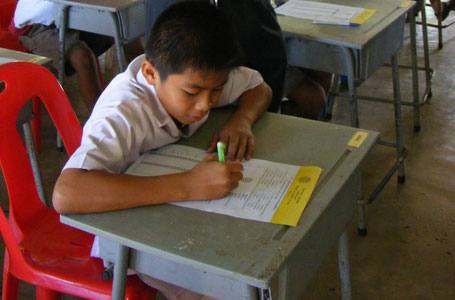 Choice schools have some of the lowest per-pupil spending in the nation. Photo by Nickolas Nikolic.

Largely due to the aggressive leadership of former state teachers’ union leader Morris Andrews, Wisconsin was once among the top-spending states on public education. By the late 1980s, as reported in a story on Andrews I did for Milwaukee Magazine, Wisconsin spent 47 percent more than the average state in per-pupil expenditures. Teachers in Wisconsin were among the top 10 states when it came to average salaries.

Though Republican Gov. Tommy Thompson was married to a school teacher, he did everything he could to drive that spending down. Thompson targeted teachers’ compensation and demonized their union. He succeeded in passing revenue caps that limited how much school districts could increase spending. He also got a measure passed that allowed school districts to evade an arbitrator’s ruling if the district offered at least a 3.8 percent increase in the total value of salaries and benefits, at a time when inflation averaged 3 percent annually.

Thompson’s approach ended the days of big contract gains for teachers. By 2007-08, Wisconsin had dropped to nearly the median in school spending, with per-pupil expenditures of $10,791, just 4.7 percent higher than the national average of $10,297. As for salaries, Wisconsin’s teachers ranked 23rd nationally, at 93 percent of the average pay nationally.

This was a stunning transformation and Thompson’s most overlooked impact as a governor. He also championed school choice, which began to drive down per pupil spending even further by providing an absurdly low voucher payment. In the most recent school year, a choice school received just $6,400 per student. That’s less than any state but Utah spent per pupil, according to a ranking done by Governing Magazine, and that was based on 2011 data. Odds are Utah passed that spending level in the last three years.

Wisconsin continued to expand school choice, creating what you could call the second biggest school district in the state, the 21,000 or so voucher students in Milwaukee. They are low income and predominantly minority students, which research shows are typically the toughest to teach, yet the per-pupil spending devoted to them is less than half of what is spent in well-to-do districts like Nicolet or Elmbrook.

As a 2011 Milwaukee Magazine feature story by John Rondy found, these choice schools have trouble staying in operation without doing constant fundraisers to get additional dollars. The reality is that $6,400 per pupil isn’t enough. You may find a few good teachers willing to work for low wages because they believe in the mission, but those will be the exception. Funding this scanty will doom schools to constant turnover of staff and an unending scramble to raise more money.

But Republicans are convinced you can run schools on the cheap. Gov. Scott Walker’s watershed law, Act 10, largely eliminated collective bargaining rights, which has further driven down salaries and benefits for teachers. Meanwhile he has cut general aid to school districts from $4.6 billion in 2010, the last year under Democratic Gov. Jim Doyle, to $4.35 billion in 2014-2015.

For many years, Democrats who opposed school choice also opposed increasing the per-pupil voucher figure. But Republicans have complete control now and they have modestly upped the voucher amount, to $7,210 for students through grade 8 and $7,856 for high school students. This will still leave choice schools with some of the lowest per-pupil spending in the nation, even as they deal with the students who are hardest to educate.

Meanwhile, Republicans have expanded choice, meaning even more schools will be under-funded. They have also opened the doors to more voucher payments for private school students, 75 percent of whom were already attending private schools. In short, this money will simply go to families who were already paying for an education. Inevitably, it will mean less money in the already shrinking pot of money for public schools statewide.

Republican school choice supporters originally argued it would result in a better education for students than Milwaukee Public Schools. That was the entire rationale for that then-radical change. But as more and more research showed voucher students do about the same or worse, on average, than MPS students, Republicans began switching to arguing that choice schools were cheaper.

But those Democrats who supported school choice, including African American leaders (like Annette Polly Williams) who had given up on MPS, would have never supported vouchers if the change was only being made to save money. If the goal is to improve education, then choice advocates should be greatly concerned that this is not happening.

I don’t know where every Wisconsin legislator is sending his/her children for school, but I doubt many are choosing schools where the per-pupil spending is below that of nearly every state in the union. Yet the policies and messaging of Republicans is telling us over and over that you can run schools on the cheap.

Meanwhile, it may take years for the impact of the cheap schools movement to be felt. Children attend school for 13 years or more and it can take awhile for the impact of lower spending to be felt on the quality of teachers attracted and the achievement of students. The general wisdom when it comes to other services and products that we buy is that “you get what you pay for.” Why would education be the exception?