Sarah Day in ‘The Year of Magical Thinking’, 2014. Photo by Zane Williams.

Joan Didion, a successful novelist and erudite dissector of social mores, expanded her best-selling contemplation about the death of her spouse, The Year of Magical Thinking, into a double load of grief when she adapted it for the stage seven years ago. She added incidents and reflections on her beloved daughter Quintana, who was in and out of intensive care before and after the death of John Gregory Dunne, her husband and equally famous literary partner.

She used the same title as the book, attracting the most luminous name in theater, Vanessa Redgrave, as the lone actor onstage describing Dunne’s quiet heart attack at the dinner table and her adopted daughter’s years of inexplicable collapses as an adult, made more painful by memories of her vibrant childhood.

Survivor guilt is a universal theme. Combined with Didion’s mastery of language, it has proven theatrically tempting post Redgrave (it has played on three continents) as an ideal showcase for leading lights of major theater companies. That reflects the approach at the American Players Theater near Spring Green where the play is one of four separate offerings at the intimate Touchstone Theater.

Sarah Day is the performer, striking a conversational tone, trying to be more inviting than aloof while handling the audience and the stop-and-start memory tracks, using a contemplative natural manner with pauses and thoughtful stares to make us feel the dialog is immediate not memorized.

The best segments make a compelling adjunct to the powerful repertoire of one-person plays. In total it may be minor theater rather than lasting permanence since it never completely escapes its essayist roots. Day is a beloved veteran of considerable personality and skill. She’s been at the APT since 1986, a state native who routinely anchors everything from modern drama to classical tragedy to high farce. (To emphasize that impressive range, she is from day to night also the imperious, high-tone comedic Lady Bracknell in Oscar Wilde’s The Importance of Being Earnest. But then, this is the sort of shape-shifting on a makeup-changing dime that makes the APT experience so engaging.)

The term “magical thinking” in this case is not flattering. It describes the depth of despair, determination and derangement that grieving partners go through, attempting through an obsessive focus, stubborn sorrow and godlike second-guessing to cure or even resurrect their loved ones. The play insists we all will go through this and won’t admit it, so wrapped are we in ego and family survival. “You don’t want to think it could happen to you,” the character called Joan says, describing her disorientation and bouts of near dementia. “That’s why I’m here.”

There is true understanding of the play’s many facets by Day and her director — Brenda DeVita, who takes over as APT artistic leader with the formal retirement in December of David Frank after 23 productive years at the helm. But their choices are more interpretative than daring, leading them to overplay the heartstring tugs, the generic guilt that flows through all families and close friends while Didion’s journey requires some blunt and even impassioned specifics.

The author gives them that room, somewhat wordily and certainly wrapped in her privileged status and success. But she understands that grief brings out the worst self-delusion and ego-driven fantasies in the lowly as well as the famous. She just has the candor and skill to show it, almost daring any performer to root out those realities under the memories of Malibu sunbathing and name-dropping dinner parties. Most evocative is how even a master of literate logic can succumb to the crazed outbursts, the desperate demands on doctors, the way all of us expect special treatment when our loved ones are sick or dying.

Sarah Day in ‘The Year of Magical Thinking’, 2014. Photo by Zane Williams.

This production emphasizes the observational aspects, resisting the ample opportunities to make Joan more brittle and manic, more on the edge of control even as she pretends to control.

There are too many times when Day’s obvious polish and the director’s trust in her actor’s technique get in the way. It’s the paradox of theater that Day understands the demands far better when it comes to Bracknell in high comedy – we can love and hate a character simultaneously in theater, and real characters even more than caricatures. Here the way to see Joan’s pain more clearly is to risk the audience disliking her controlling side and then recognizing the emotional roller-coaster she’s trying to master.

Incidentally, the indoor Touchstone theater needs more recognition from the 1,000 visitors per outdoor show who routinely trek Up the Hill or take the shuttle to the major theater that has staged mainly historic classical works in repertory for 35 years under the trees and stars.

For the past five years, the Touchstone has been fighting for and deserving attention. It’s on a close-by smaller hill (and a shorter walk or shuttle) and is a comfortable versatile space that only seats about 200 but performs afternoon and evening. The Year of Magical Thinking rotates with David Mamet’s American Buffalo and soon with Tom Stoppard’s Travesties and Euripedes’ Alcestis. Full details and a printable schedule are available at americanplayers.org.

The Year of Magical Thinking Gallery 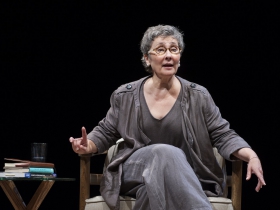 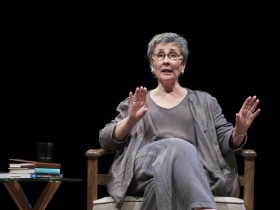 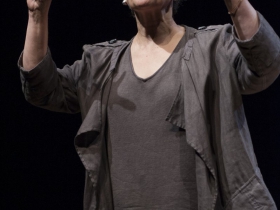 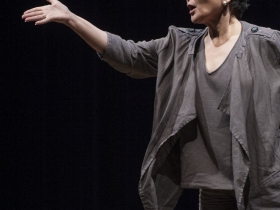 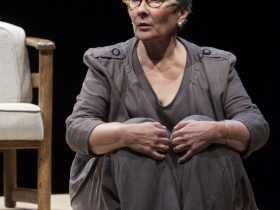 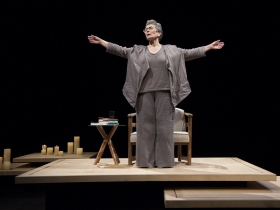