APT’s Romeo and Juliet is strong on action and pacing, and weak on the tragic meaning of it all.

James DeVita as actor and playwright has become a popular staple of Milwaukee theater while remaining a mainstay of the American Players Theater near Spring Green, where he and his family live. (His wife, Brenda DeVita, will take over next year as APT artistic director).

The APT and Milwaukee community have always been closely connected. Of the estimated 100,000 visitors each season APT draws, some 16 to 20 percent regularly travel from the Milwaukee metro area. No wonder the theater relies on the best-known names from its central drawing areas (Madison, Chicago, Minneapolis and Milwaukee, all communities that know many of the APT stalwarts). The current Romeo and Juliet, drawing adolescents and families along with the longtime regulars, features Jim DeVita as director and James Pickering, long a staple of his own at the Milwaukee Rep, providing an authoritative turn as the prince of Verona overseeing the Shakespearean tragedy.

Much of the rest of the company reflects the APT penchant for big voices and shared professional training and an ensemble approach to the classics. It’s a great experience for the actors and something of a family atmosphere, but sometimes a limiting approach if used cavalierly. While providing a strong basic professional standard, it tends to emphasize the familiar skills over the creative heights. Those concerns hover over this season, which is still evolving.

How do you revitalize classics so familiar? (It’s a bit late to suggest Shakespeare should rewrite Act IV.) How do you introduce new audiences to these treasures and yet please the generations that grew up with them? How do you encourage actors, directors and designers to continue exploring rather than resting on the laurels of place and pleasure in an attractive, smoothly-operated setting? (Because if nothing else, the woods, the hills, the picnic tables combined with a great outdoor stage and wonderful acoustics are indeed magical.)

These actors are employed over eight months in a repertory that allows them some range of presentation and tempts the producers into casting to type. The setting requires strong vocal chords, physical nimbleness and immediacy, embracing the wind rushing through the trees and accepting the likelihood – as happened on opening night of Romeo and Juliet — that rain will suddenly pour down on the dying bodies in Capulets’ tomb.

DeVita as director reflects such highs and lows. As performer he shows remarkable standards and investment in exploration, at both APT and as demonstrated recently in his solo domination in the Milwaukee Rep’s An Iliad. As director he knows every nook, cranny and ramp of this outdoor stage, providing masterful staging as rowdies cavort and carouse or hide and holler in the night. For the famous balcony scene, he uses the full range of “this wooden O” so the audience has to shift focus to keep as engaged as the lovers.

Without harm or foul he changes a few elements to freshen the piece. (A female apothecary, played with appropriate grimness by Abbey Siegworth, steps in to handle the famous opening chorus.).

Yet there are immense problems. DeVita keeps all the plot side roads in place without exploring the dramatic rationales that Shakespeare invites (to make Verona and the audience feel remorse for adult immaturity toward these feverish young lovers from feuding families).

In rushing through the story and emphasizing its central simplistic lines, the capers and sword fights rule over the sweeping agitated human issues. But there are theatrical reasons more than literary ones that the poetry, dialog exchanges and emotional weight of Romeo and Juliet have climbed to such a pinnacle over the years. This is more workmanlike introductory Shakespeare, watchable but hardly masterful. For the actors these are remarkable opportunities largely thrown aside.

Juliet, played by Melisa Pereira, not only has some of the most famous passages in English literature but a role of remarkable nuance. Sudden sexual passion and youthful excess will change in tone and commitment as she confronts an unsympathetic adult world. The actress capably handles the basic characterization but not the parries and thrusts requiring a great vocal range and emotional flexibility.

Christopher Sheard is similarly centrally admirable – as well as an ideal physical fit — for the callow Romeo at the start. But not for the overwrought Romeo ready to defy the fates. The tragic consequences of his actions are treated as a crispy dramatic rush emphasizing exposition over emotion.

Nate Burger may not hit the outrageous rhetorical highs of the jesting Mercutio but grows into a winning rage over the uselessness of his death.   The other young bucks of the piece, specifically Jeb Burris as Benvolio, can barely handle the poetry though Matt Schwader as Paris and Eric Parks as Tybalt do deliver dramatic weight and language skills in these often neglected roles.

Some other veterans of the APT prove a mixed bag. James Ridge is a sturdy actor, but as Capulet, he misses the full range of this self-absorbed rage-blinded father figure. Colleen Madden is sadly a summer stock version of the nurse, while John Pribyl as Friar Laurence understands his role as driver of an unlikely plot yet still lands some nifty reactive moments.

You have to forgive the actors for some missed opportunities and blame director DeVita’s emphasis on action rather than nuance and on pace and posture rather than emotional belief. Whatever the cause, the results are a comedown from APT and DeVita’s most explorative and provocative standards of the past. 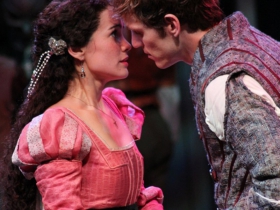 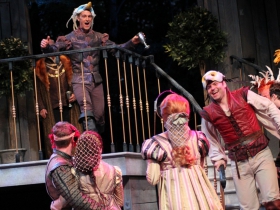 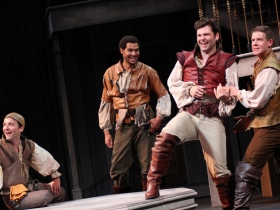 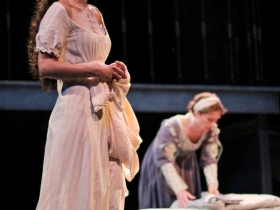 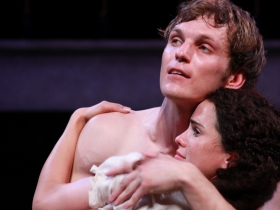 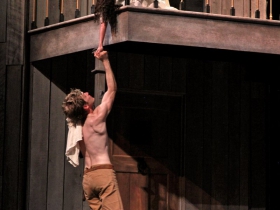