In what’s becoming an encouragingly frequent occurrence, the Milwaukee County Transit System has released more real time bus data today.  The latest release more than doubles the number of routes for which real time data is provided. New routes with real time data include 10, 23, 35, 44, 49, 57, 60, 67, 79 and 223.

Real-time data allows riders to know the arrival time of buses via a website, text message, or phone system. The system gives riders up-to-the-minute information on when a bus will arrive at a given stop.

Customers can receive arrival times by texting MCTS [BUS STOP NUMBER] to 41411 or by calling the information line at 414-344-6711. Each bus stop is now equipped with a unique number, just above the route numbers. Riders can also sign-up to receive automated notifications everyday.

Despite the addition of more routes, the system still has bugs from time to time, as I’ve found on two occasions (among countless rides). 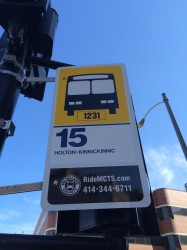 Using the texting feature, I’ve received status updates that including upcoming buses, but missed what should be the next bus to arrive. Schedule data tells me a bus should be arriving soon, and the real time system says it doesn’t exist. As I learned this morning, if the new annunciator system on the bus crashes (tied to the same hardware that controls the location data) the bus will disappear from the real time system. The good news is a bus shows up much earlier than estimated, the bad news is the system couldn’t tell me it was coming. MCTS is probably wise to exercise patience before rolling out the data on every route.

Our prior coverage includes a April 23rd announcement and a June 16th update.

As noted before, the Fond du Lac Avenue garage is receiving the real time upgrade first. Next will be Fiebrantz. Routes that are dispatched from both garages (like the 10) will have only partial real time data for a few more weeks.

If you have an issue with the real time data, MCTS requests you contact them. According to spokesperson Jackie Janz “Please keep in mind that we are still testing the Stop Announcement System and Real-Time. We are making adjustments throughout this process. If anyone has an issue, we appreciate the feedback so we can look into the matter. When reporting, please provide the bus number, time of day and location so we can review. This can be emailed to mmarketing@mcts.org.”