Doyle program rewarded high school students with good grades, but program is being phased out. 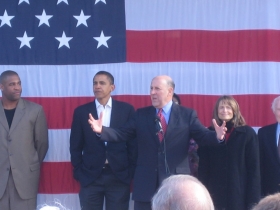 While the record $1.2 trillion in student loan debt has attracted election-year calls for reform in Madison and Washington, D.C., Wisconsin is ending a program that has helped students like Toshia Spindler go to UW-La Crosse. The Covenant Scholar program that Democratic Gov. Jim Doyle and legislators began in 2007 is being phased out. An estimated 20,424 eighth graders went on to complete the program, qualifying for college grants that range from $250 to $2,500.

In his first budget, Republican Gov. Scott Walker in 2011 got GOP legislators to sunset the Covenant Scholar program.That decision was obscured by bigger controversies – the Act 10 fight that all but ended collective bargaining by most public employees, and the controversial 2011-13 budget that cut state aid to public schools and local governments.

Doyle structured the Covenant to combine public service and reward high school graduates who attend a public or private university or technical college.Starting in 2007, eighth graders could sign a Covenant pledge promising to:

*Graduate from high school with an overall “B” grade average.

*Prove they were responsible members of their community by completing at least 30 hours of community service by April 1 of senior year.

*Apply for all other state and federal financial aids.

Covenant Scholars who complete those requirements get grants of between $250 and $2,500, depending on family income. Although Doyle declined a request for comment, he touted the program this way in his 2007 budget message: “I don’t want any high school kid to think college isn’t for them, or that it’s only for rich people. I want every boy and girl to know … with the Wisconsin Covenant, college is within your grasp, just reach for it.”

According to the Higher Educational Aids Board (HEAB), which is administering the Covenant Scholar shutdown, students could receive the grants for up to eight semesters, and qualified Scholars had 10 semesters – or up to five academic years – to use the award.

Republicans in 2011 began a four-year phase-out of the program – a process that honored the promise made to all eighth graders who had signed the Covenant by then, says Walker Press Secretary Laurel Patrick. HEAB officials said the phase-out means that high school seniors in 2015, who signed the Covenant in eighth grade and complete its requirements, will be the last ones to get grants. The five years of eligibility means the program will end in 2020.

Toshia Spindler, 19, a biology major and UW-La Crosse sophomore, qualified for the maximum $2,500 grant. She says she is “extremely disappointed” that the Covenant program is ending. Spindler says a Stratford School District counselor made her eighth-grade class aware of the program.

Spindler, who plans to graduate in 2017 and go to graduate school to become a physician assistant, says her favorite part of the program was “volunteering” to meet the community service requirement. “It makes students realize what they need to do to achieve excellence both in school and in the community,” she notes.

“You get some grant money, and that’s great. But you get other benefits — making community members smile on one of their worst days, learning what’s truly important in life.”

Spindler said being a Covenant Scholar “allowed me to start making steps towards my career…It’s not about grant money, but more importantly about achieving excellence and making a difference.”

The Wisconsin high schools with the most Scholars this year were Kimberly, 91; Wausau West, 74; Green Bay Preble, 71; Middleton, 69, and Green Bay Southwest, 63.

Walker ended Doyle’s program because there are “more effective” ways to help students and parents pay for college, Patrick says. For example, he notes, Walker “proposed tuition freezes at the UW System twice in the last 14 months” – including the first two-year freeze in the System’s history. “This second proposed tuition freeze will continue to help make higher education a reality for students and their families,” Patrick adds.

The original Covenant program also had no dedicated source of funding, Patrick notes.00 Its cost tripled in the first three years, going from $4.4 million in 2011 to $12.7 million in 2013.

2 thoughts on “The State of Politics: Republicans Kill Covenant Grants for College Students”