Sticks And Stones May Break Your Bones

By Dave Schlabowske, Bike Federation of Wisconsin - Jun 27th, 2014 01:51 pm
Get a daily rundown of the top stories on Urban Milwaukee 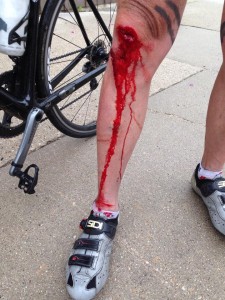 His Trek Project One escaped the crash unscathed, Barry not so much.

There seemed to be an unlucky cloud hanging over southeastern Wisconsin all weekend. Three Bike Fed members I know crashed after hitting sticks or stones, and all three broke bones. My Facebook was flooded with post-crash photos, including X-rays of broken collarbones and people in hospital beds, hardly the smiling panda shots I am used to seeing when I check in Sunday night. My wishes for speedy recoveries go out to Barry Mainwood, Jim Bittner, Steve Weinstein and anybody else who hit the pavement this weekend.

I was a personal witness to some of this carnage when friend and super volunteer Barry Mainwood hit a sharp-edged bit of heaved asphalt on the Ozaukee Interurban Trail, just north of Belgium. I was riding up front with Bruce Keyes, followed by Ward Fowler and Barry, with Tom Metcalfe as the caboose. We were cooking along at about 28mph with a strong tail wind, when I heard some quick curses followed by the sound of carbon on carbon. 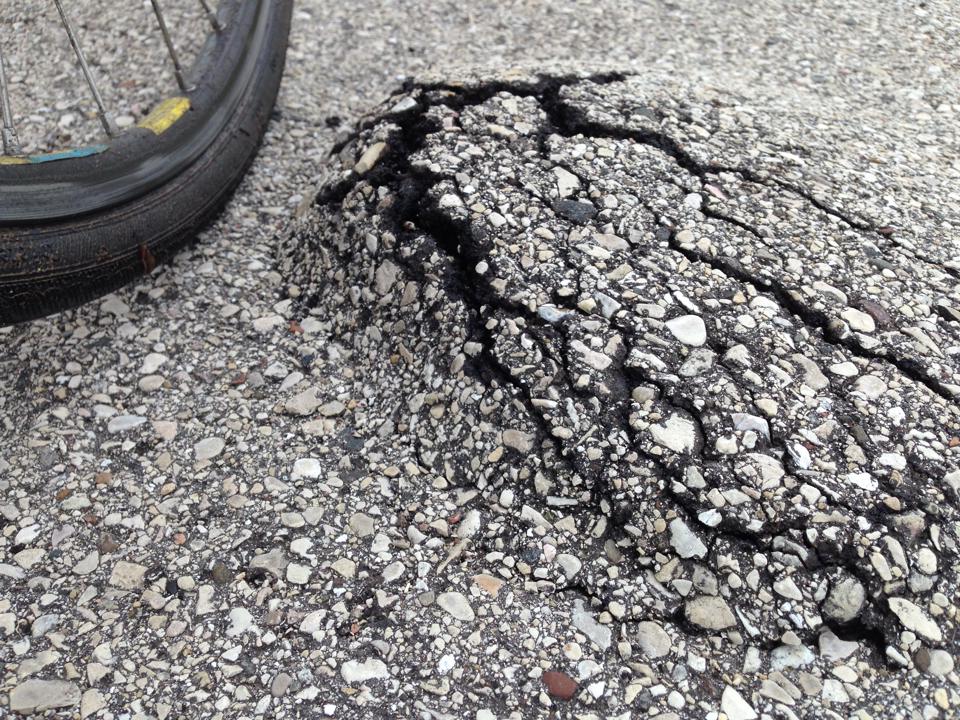 Barry hit the edge of a root or weed pushing up through the asphalt, which jerked his front wheel  and sent him over the bars. We couldn’t see how sharp-edged it was in the foggy morning light.

When we stopped to look behind us, Barry and Tom were on the pavement, bikes in a heap. Tom was up and moving quickly, but Barry was motionless. Frightened, we all ran to see how he was and thankfully saw him grimacing. He rolled over and we could see tendon and bone through two remarkably round and deep lacerations in his knee. It looked nasty, but despite the blood and bones, Barry insisted it didn’t hurt as much as his shoulder, which he could move, but had very limited motion. 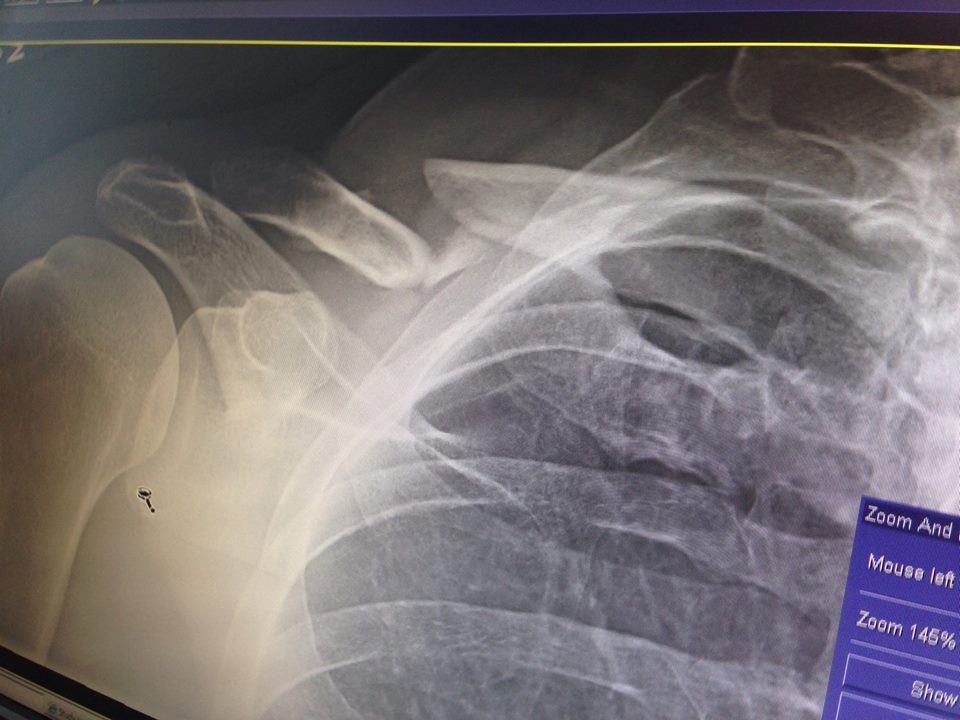 I remember Tom or Bruce saying that if his shoulder hurt worse than his knee, it must really be messed up. Yes, that looks really messed up to me.

Tough guy that he is, Barry tried to get us to continue on and leave him behind. “You guys keep going to Sheboygan,” he said. “I’m just fine and I’ll make the call of shame to Julie. I don’t want to ruin your ride.” Of course we refused to abandon our fallen comrade, and rode with him (yes, he got back on his bike and rode it) another mile or so to Oma’s On Main in Cedar Grove, where we borrowed their first aid kit, cleaned Barry up a bit and ate breakfast while we waited for Barry’s son to come pick him up. After yummy pancakes in the quaint, Dutch town, we bid Barry farewell and the three of us rode back to Milwaukee without incident.

I was on Facebook, watching for updates from Barry, when I saw the stick in the front wheel photo shared by Jim Bittner, who lives just across the border from me in Wauwatosa. Reading through the comments, I saw another X-ray and yet another broken collarbone. I know breaking a collarbone is almost a requirement to move up a category in bike racing, but both of these guys went down on fun rides, not pushing it around a four-corner crit! 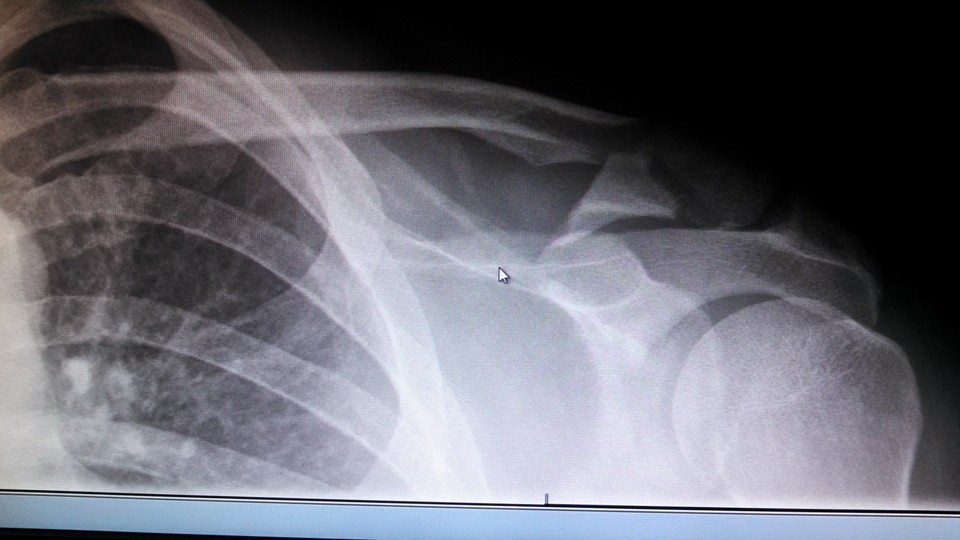 As if that was not enough, Steve Weinstein, a lifetime member and current member of the Board of Directors for the Bike Fed, went down when he hit some loose gravel while participating in Madison’s Honor Ride, hosted by Saris Cycling Group. Here is his stoic report:

I had the privilege to bike with the Honor Ride today in Madison Wisconsin. It’s a program that raises money so that vets can bike in any city they visit.

Unfortunately, for me, my ride resulted in skidding over loose gravel, losing control of my bike and breaking my left hip.

The fine folks at University Hospital in Madison were/are superb. I was immediately taken into surgery and the hip repaired. Oh yeah, the morphine cocktails were also grand.

So, maybe tomorrow I’ll get to go home. Maybe Monday.

Whichever, hopes and prayers for a quick recovery are appreciated. 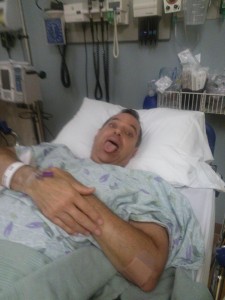 The pain killers must have been flowing when this photo of Steve was taken.

Steve told me he is already getting physical therapy and will only be off the bike for a week or two. That is pretty amazing, and I hope all three of you have equally speedy recoveries.

This spate of crashes is a reminder that about two-thirds of all bike crashes don’t involve motor vehicles at all. The crash that most people fear the most is in fact the one they’re least likely to experience. Riding a bike is generally a relatively safe thing to do for recreation and transportation, and if you factor in the health benefits, it will certainly improve your overall health and likely extend your life.

On another positive note, the number of people killed in crashes with motor vehicles is down from last year. One of the not-so-cheery parts of my job is to review daily and weekly fatality reports from the Wisconsin Dept. of Transportation. Only one bicyclist has so far died in a crash with a motor vehicle in 2014 compared to four last year at this time. All crashes are down this year, except those involving people walking and on motorcycles. 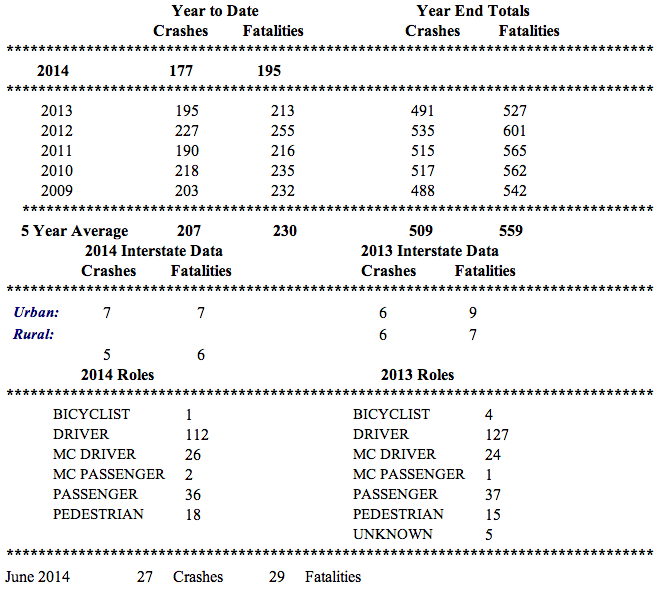 You can see the fatal crashes for bicyclists is down this year.

So don’t let this streak of bad luck scare you off your bike. Riding a bike is already safe, and keeps getting safer as our crash rate continues to fall in Wisconsin. I hope you all have a safe, enjoyable rest of the year riding.

2 thoughts on “Bike Czar: Sticks And Stones May Break Your Bones”