The Easy-Going Charm of Y-NOT II

No bar in town keeps longer hours -- or has had the same proprietor for so many years.

Remy in front of the Y-Not II. Photo by Michael Horne.

One of the challenges of following the Milwaukee tavern scene is to know what hour a bar is open and which days it is closed. The Y-NOT II and Coffeetails, both operating under the same Class “B” Tavern License, make this calculation simple: if the law says they may be open, they will be open. Let us chart the day at the joint establishments

Seven days a week, at 6 a.m., the doors open for the day at Coffeetails, the Y-NOT’s alter-ego, which has its own entrance at 1506 N. Van Buren St. and an internal connection to the main tavern up a short flight of steps. (Coffeetails closes, and the main bar opens, at 11 a.m. daily.) The party will continue hereabouts until 2 a.m. (2:30 a.m. on weekends), when the Y-NOT shuts down for the night.

Coffeetails opened 6 years ago, 40 years after Anthony F. “Tony” DePalma got his first license for the Y-NOT II and felt it was time to expand his space and hours. It fills a small place that was once filled with many of the castoff tavern and restaurant fixtures that have a knack of finding DePalma. He had planned to run the space as a liquor store, but the laws changed, so up from one of the tavern’s three basements came espresso machines, coffee grinders, glass coffee mugs, paper cups bearing the names of defunct restaurants and many, many shot glasses.

From Thursday through Monday, Germaine Bowers opens the early shift and starts pouring liquids of various kinds, which she will continue to do — even more so when there are customers — until the coffee bar closes at 11 a.m., and the crowd makes its way upstairs to the Y-NOT.

Customers seem to appreciate the coffee — the thought is nice, but the true spirit in the morning is more likely to come from a bottle of VO whiskey, or a Miller beer. Still, enough coffee, alcohol-enhanced or not, is produced to provide over a ton of coffee grounds annually to the Riverwest Food Pantry garden at Three Holy Women Parish’s St. Rita of Cascia Church around the corner.

A group of early regulars includes a number of folks in the service industry, often still up from the rigors of a late shift the night before and ready to play a game of cribbage with Germaine (try that at Starbuck’s!). This includes a cadre of young folks who work at Topper’s, delivering pizzas until 4 a.m. and ready for something to do before they crash. There is also a nice group of retirees, many gays, and the occasional few for whom employment has proved elusive or unnecessary. The broadcast entertainment consists of old game shows — even older than the television on the wall that shows them.

If 6 a.m. is a little early for you, well, the Y-NOT II opens its doors at 706 E. Lyon St. just around the corner from Coffeetails at 11 a.m. The tavern, with a capacity of 100, occupies 3,297 square feet in a classic brick building that has owned by the Eichenbaum family since it was built in 1919. The structure includes 30 apartments and “light housekeeping rooms,” as well as a car wash and a corner laundromat that is surrounded by the bars. Yep, it’s a saloon under a rooming house. How romantic, and vintage Milwaukee.

Two tall round tables flank the central doorway and open to a vista of E. Lyon St. and its busy intersection with N. Van Buren St. through copper-framed plate glass windows. There is also a Genothalmic Chair manufactured decades ago by the Shur-On Optical Co., of Geneva, N.Y. Despite its clinical name and appearance, it is rather comfortable.

Santa Claus in the electric chair. Photo by Michael Horne.

In the same window niche, and considerably less comfortable, is an electric chair. It was a prop used in the Milwaukee Repertory Theater’s 2012 production of “Assassins” and was designed by its carpenter, Erik Lindquist, a Y-NOT II regular. Tony bought it at a sale of the Rep’s gear one year. Each year a plastic Santa Claus occupies the chair and gets the occasional jolt.

You’re not even in the door yet, and you can tell that this place has a lot of stuff, like those geographically incongruous Route 66-upholstered settees scattered throughout the room, probably remnants of a closed steak house. Decades of sports schedules, campaign signs for Democrats and liquor ads are stapled, one atop another, in the front of the room, leaving space for only a folk-art bottle cap panel, and a very popular golf game that costs about the same as a day at the country club for some of its more avid players. But here, the 19th hole is always within reach.

Beneath you is the original terrazzo floor, possibly laid by Sicilian artisans, who might have been owner DePalma’s kin. A fake plant (DePalma’s palm) provides the necessary absence of verisimilitude this environment demands. In the center of the room, athwart two columns, is a long bar with service in the middle and seating at 27 swiveling, padded, backed seats around the periphery. Happy neon cocktail glasses spill their contents on the wall, with only the wine glass balanced properly. Nobody drinks wine around here.

The real glasses include the house favorite, the boomba, a stemmed beer glass with a spherical bowl. It holds a pint.

But why think small? Go for a liter of beer, sold for as little as $3.75 and served in ponderous mugs that weigh nearly as much empty as when full. You have your choice of 8 taps from an antique brass dispenser, or 4 taps (mostly Sprecher specialties when available) in a Perlick dispenser. If you see plastic cups inverted over a tap handle, make sure to ask the bartender for that variety.

A good reason to go small, if so inclined, is the house specialty of Airplane bottles of many spirits, priced as low as 2 for $7. “Set-ups” are available for those customers who want to mix their own drinks.

You say you want to shake the bartender for a shot? No dice.

An open-top touring sedan by the Cadillac Motor Company is the perfect conveyance for a Christmas Night visit to the Y-NOT II. Photo by Michael Horne.

If you’ve made it this far, you might want to head to the back of the room, perhaps drawn by the free popcorn in the brightly lit machine. Just beyond is a free, small pool table and an impressive collection of lousy cues hung from a very high-quality rack dating to the ‘20s or earlier. Here, too, you are surrounded by mirrors, while the little remaining wall space includes a caricature of “Poland’s Shatzie” by Peter Paris, a remnant of the “Rex Quarter Century Club Picnic 1974.” It is well-illuminated by an abundance of theater lights above, which also light a collection of dozens of museum posters and postcards collected in person by Tony on his travels to the world’s great art palaces. Nothing like a painting from Picasso’s Blue Period to put you in the mood for an afternoon of drinking.

There is a photo of a ‘70s Y-NOT baseball team, and one of Tony’s dad holding a boomba outside the old Alioto’s at 1601 N. Jackson St. back in the 1950s. The back room also has 10 curvy benches (Route 66 again), 6 square tables and two round ones. On Tuesday mornings, this becomes the Y-NOT II office, where Tony spreads open his checkbook and makes deals with the beer, wine and liquor distributors who take their turn peddling their wares.

Wednesday afternoons, it becomes his club-within-a-club when Tony and buddies gather for their penny stakes card games, a little bite to eat and maybe something to drink. This is the time to sample the fancy Scotch and Port that the liquor dealers are trying to sell.

Way in the back, an area that was formerly a large closet for the adjacent apartment was cleared out to become an intimate dart room, with an electronic machine. It is decorated with a tapestry of dogs playing poker, perhaps not from Tony’s travels to the world’s great art palaces. Just next to the darts is a unused baby grand piano, the only recent function of which is to support a large flat-screen television. The mirrors reflect the “Y-NOT” “Y-NOT” neon signs, reading “TON-Y” “TON-Y”. A breeze in the air comes from a giant fan mounted on a 30 inch diameter base.

Business is down, Tony says, a product of changing drinking habits and the state’s smoking ban, which seems to him to be directly aimed at his customers. Although the tavern does not sell food, on certain occasions it provides a spread that is better than what you can actually pay for in restaurants in some other cities.

That’s when somebody is deputized to haul up a giant grill that looks like it was salvaged from a blast foundry, and Tony sets it blazing out on the street. Dozens of ears of corn and chickens grill until they are served in the bar, often accompanied by food brought in by customers, and topped by Sicilian goodies from Tony’s nearby kitchen. There have been some truly memorable feasts served here.

Here’s an anecdote that pretty much sums up the Y-NOT II experience and the advantage of having a long time, non-incorporated, sole proprietor as owner and host and friend: Some years ago a member of Tony’s Wednesday afternoon card club died, and arrangements were made to hold a memorial celebration at the tavern. Notice was duly made and printed in the decedent’s obituary one day.

The next day, a revised death notice announced that the wake would be held at a hotel instead, due to the insistence of a family member who thought the Y-NOT II was not nearly tony enough for her relative, who dearly loved the place. Rather than cancel the event, the buffet went on the table and all the patrons were invited to have their share of the funeral feast that was not to be. It was a celebration of life, with Tony DePalma as host. 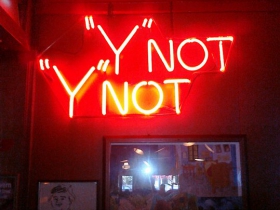 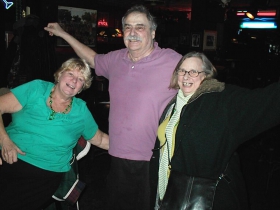 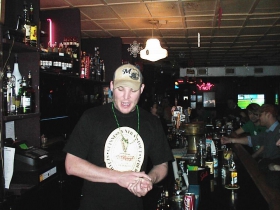 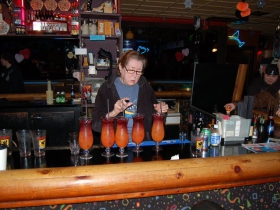 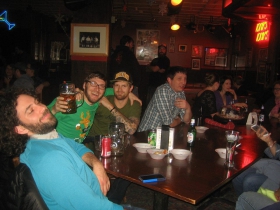 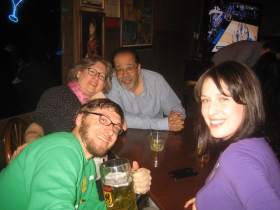 0 thoughts on “Taverns: The Easy-Going Charm of Y-NOT II”