By Bill Lueders, Wisconsin Center for Investigative Journalism - Jun 18th, 2014 10:07 am
Get a daily rundown of the top stories on Urban Milwaukee 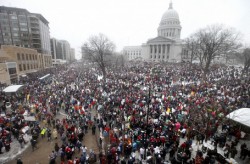 The protests in Madison put a spotlight on the divide between the two parties. Photo by Patti Wenzel

The Republican Party of Wisconsin drew national attention recently for weighing whether to affirm the state’s right to secede from the union. The proposal was rejected at the party’s convention in early May, after the vast majority of Republicans in the state Assembly opposed it as “worthless” and “a distraction.”

The state Democratic Party, meanwhile, made headlines because its proposed 2014 platform called for legalizing marijuana and gay marriage. Both planks, which the party approved at its convention in early June, were actually golden oldies, having also passed in the party’s 2012 platform.

Joe Heim, an emeritus professor of political science at the University of Wisconsin-La Crosse, says platforms often reflect the positions of a party’s most ardent members: “People who go to conventions tend to be a little more doctrinaire, a little more vested.” Other delegates may “go along with some of the more unusual if not extreme proposals in the interest of maintaining party unity.”

Historically, Heim says, these documents have not been taken too seriously, especially at the state level. But he suspects that is changing, as evidenced by the statement in the Democrats’ platform that says candidates are expected to support these ideas and, if elected, work to bring them about.

The platforms and resolutions from Wisconsin’s two parties convey vastly divergent political visions. If they serve as marching orders, they would take the state in profoundly different directions.

After warning darkly of national developments that portend “the moral and economic collapse of our nation,” the approved platform for the state Republican Party gets specific. It calls for, among other things, “the development of free market energy resources and the elimination of the Department of Energy” and the repeal of the Affordable Care Act “in favor of free market solutions.”

The 2014 platform for the state Democratic Party, meanwhile, decries “obstacles to voting,” particularly to minorities, senior citizens and the poor. It champions nonpartisan redistricting, a constitutional amendment declaring that money is not speech, effective alternatives to incarceration, “aggressive action” to address climate change, and farming systems that are “humane to animals.”

The GOP platform, citing the “tyranny and suffering that can be imposed upon a disarmed and vulnerable people,” opposes all efforts to require gun registration or restrict the ownership, manufacture, transfer, carrying or sale of firearms or ammunition. The party also backs constitutional carry — the ability to pack concealed weapons without any sort of state license.

Democrats, in their platform, beg to differ: “We support the right to hunt, to bear arms, a concealed carry ban, background checks on all gun sales, banning the sale of assault weapons, and limits on the size of magazines.”

According to the GOP, a person’s natural rights “begin at conception and continue until death.” The Democrats say: “We believe in freedom of reproductive choice, family planning, and the individual’s right to choose death with dignity including physician‐assisted end‐of‐life.”

Besides platforms, both parties passed resolutions calling for specific initiatives. The Democrats posted these online immediately after their convention. Among them were resolutions to hike the minimum wage, ease the burden of student loans, and increase local control over frac sand mines.

The state Republican Party posted its approved platform in early June, a month after its convention. Its resolutions were not posted until June 16, more than six weeks after passage — prompting Heim to speculate that the party wanted to avoid calling attention “to some resolutions that may not sit well with the general public.”

The party’s 2014 resolutions declare that “marriage between a man and a woman is the best environment to raise children and to teach them the values and morals required to maintain a free society.” It also calls for cutting all state and federal tax money to Planned Parenthood, eliminating Common Core education standards, enacting Right-to-Work legislation, passing a new voter ID law and abolishing the state Government Accountability Board.