The three Democrats running all have similar stands, so may have to attack each other to stand out.

You were probably too busy to notice, but there’s a fascinating campaign for the Democratic nomination for attorney general. It’s the most dramatic statewide race that will be decided in the summer-time primary elections on August 12.

Although the three Democrats haven’t yet turned on each other, they have less than two months to walk the fine line between convincing voters why they would be a better attorney general and a down-and-dirty mud fight. And the latter may be inevitable, since the three agree on so many issues: Same-sex marriages must be legalized. New laws setting up barriers to a women’s right to an abortion must be overturned. The environment must be protected. Voters should not have to present a photo ID before exercising that constitutional right. The epidemic of heroin abuse must be confronted.

When you agree with your primary election opponents on so many things, you can either tear them down or sell your personal story to voters. That’s why delegates to the Democratic state convention were treated to so many details of their personal lives. 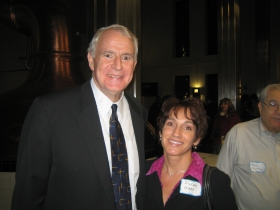 “I almost died in childbirth,” Happ said, casting herself as a fighter and a “Harley-riding Democrat from a Republican county.” Without naming her opponents, Happ said she is the only candidate who can attract “swing voters.” She’s didn’t remind the delegates, but she’s also the only candidate endorsed by EMILY’S list. In 2008, she told the convention, she was the first Democrat elected as Jefferson County’s prosecutor in 70 years, and her winning margin then was higher than President Obama’s.

“When will the attacks stop?” Happ challenged Democratic convention delegates, charging that Republicans have attacked voters’ access, women’s reproductive rights, “world class public schools ” and environmental protections.  “As you next attorney general, they stop with me.”

Here’s one number that puts Happ’s challenge in perspective: 1.3 percent of the statewide vote in the 2006 Democratic primary for attorney general was cast in Jefferson County. 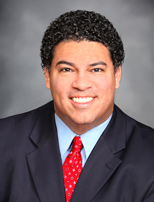 An African-American, Ozanne told delegates at one time his own marriage to a white woman may have been illegal in parts of the nation. He said his mother risked her life signing up African-American voters in the deep South, where she was a founding member of the Student Non-Violent Coordinating Committee. His father taught labor history, he added. “I know rural and urban Wisconsin,” Ozanne said.

Ozanne reminded Democrats he personally told state Supreme Court justices that Republican Gov. Scott Walker and Republican legislators broke the state law when they passed Act 10 in 2011, all but ending collective bargaining by most public workers. The court ruling in that case was a “shame.”

Ozanne said he has taken risks by pioneering an alternative to prosecuting parents who use corporal punishment with their children and added that Wisconsin “cannot prosecute our way out” of heroin abuse. “It’s not all about putting people in prison,” added Ozanne, a former deputy secretary of the state Department of Corrections.

“This is leadership before you,” Ozanne told convention delegates. “Look at what I am doing and what I have done.” Ozanne’s base: Dane County cast 18.6 percent of votes in the 2006 Democratic primary for attorney general.

In a campaign video, and in his convention speech, Richards introduced his 6-year-old son, Alex. His wife, Andrea Rowe Richards, a former communications manager of the Milwaukee Department of City Development, praised her husband in the video. Richards emphasized his 16-year Assembly record, saying it prepared him to be “a lawyer for the people.” He was an assistant leader of Assembly Democrats and served on the Legislature’s Joint Finance Committee.

Richards, who advocates background checks before all gun purchases, also decried the  “easy access” to guns and warned the National Rifle Association, “I’m not afraid of you.” He also wants first-offense drunk driving to be a crime and said the U.S. Constitution must be amended to overturn the Citizens United ruling on campaign finance. “Corporations are not people. Money is not speech.”

One number that bodes well for Richards: Milwaukee County Democrats cast 24.5 percent of the vote in the 2006 statewide primary for attorney general.