The Virtue Gondoliere Can Haul Lots of Cargo

Dogs, kids, groceries, they can all be transported in this handy cargo bike.

By Dave Schlabowske, Bike Federation of Wisconsin - Jun 13th, 2014 11:40 am
Get a daily rundown of the top stories on Urban Milwaukee 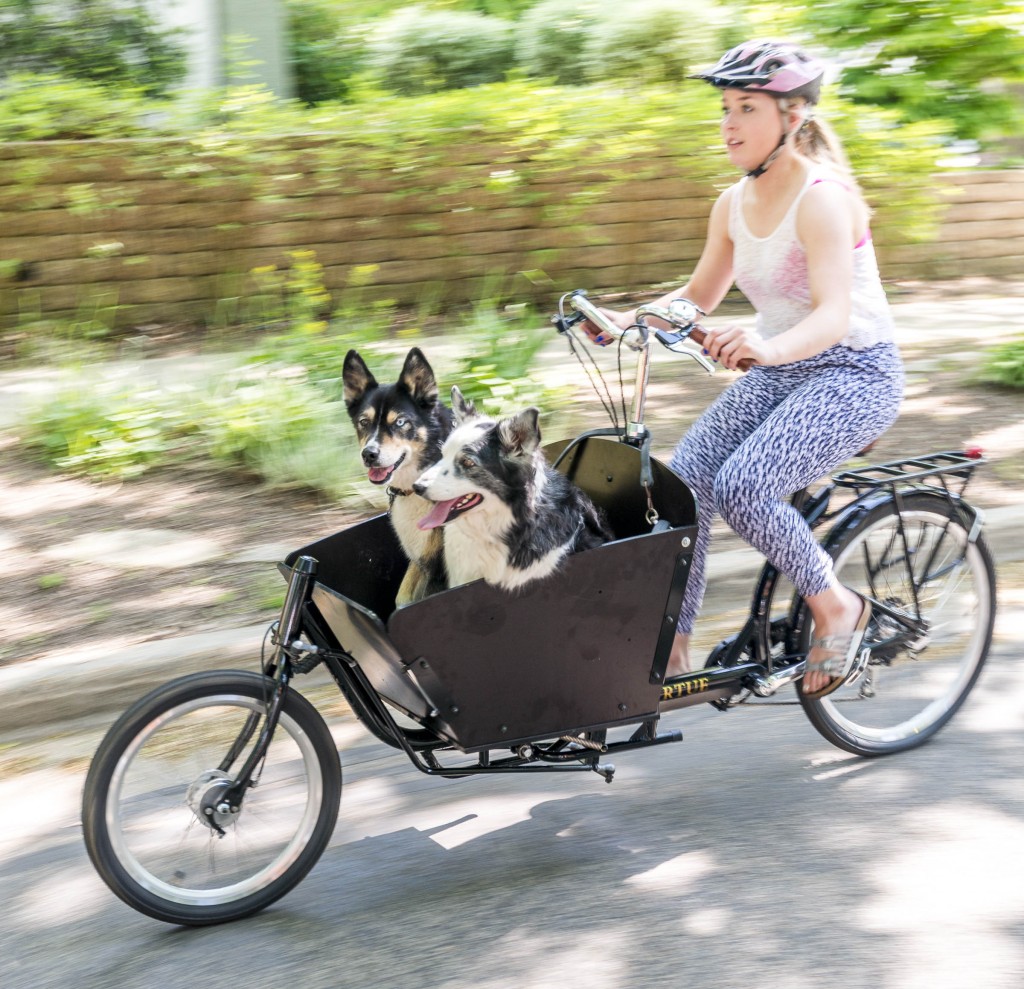 My daughter Frankie found the Virtue Bakfiets easy to ride, even fully loaded.

My 12-year-old dogs still love going for bike rides. Pulling out the bike and harnessing them up means we are headed to run along the Wauwatosa mountain bike trails and swim in the river. My Husky Misha used to run alongside me right through the city, the entire 7 miles from our west side home to the old Bike Fed office on the east side. She ran for the sheer joy of it, but was rewarded with a dip in Lake Michigan and a treat at the office. Our border collie Bridget used to run to the Menomonee River and then do another 8-10 miles on the trails, with plenty of stops to swim along the way.

The problem is, they have a good memory for fun, but a bad memory for how sore they are the day after. It is more than a mile just to get to the river, and adding even one loop around the Hoyt Park Trails puts them in the hurt locker for the next two days. I have come to accept that they just can’t do those long rides at bike speed anymore, so we either skip them, or I have to reserve a lot more time to walk them as the miles don’t seem to bother them at a pedestrian pace.

I borrowed the Virtue Gondoliere bakfiets from Truly Spoken Bicycles for a week-long cargo hauling test, my dogs had dibs on a ride in the box. Since my daughter is heading off to Madison next fall, she made a better pilot than a passenger. Never having ridden a bakfiets, she was nervous to start, but was in the groove handling the long bike within half a block. The dogs were similarly nervous at first, but soon settled into happy grins when they realized we were heading on the route to the river.  Both Bridget and Misha gave the Virtue two dew claws up. 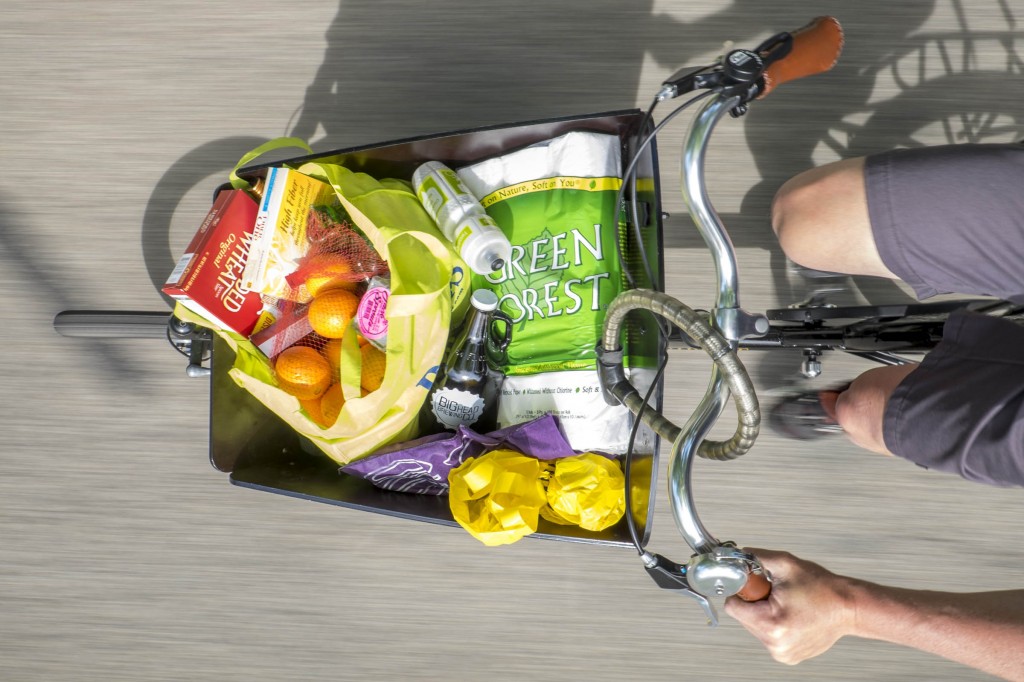 I can shop till I drop with the Virtue, and save on the value pack of TP without even using the rear rack and panniers. 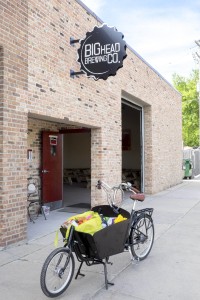 My next test for the Virtue was a trip to the grocery store. I typically shop with my wife’s Workcycles Omafiets. With its large front rack fixed to the down tube, basket and big Dutch panniers, I can shop for the week for three of us and the dogs if I am careful about what I buy. Big, cheaper-by-the-pound bags of dog food are not an option, and I have to get the smaller four-roll packs of toilet paper because while Oma is a hauler, she still has limited capacity for big items.

With it’s front box, I was able to do our grocery shopping, buy the big pack of TP and still have room to fill up a growler at our neighborhood micro-brewery, Big Head Brewing Co. Note I still have more room for stuff in the front and I am not even using the Virtue’s super heavy-duty rear rack.

While the Virtue certainly passed all my cargo-hauling tests with flying colors, the real test is to haul kids with it, so I gave it to my coworker Jessica Binder to use to pick up her son Everett after school.  Jessica has been trying out various cargo bikes for a while now, trying to find the perfect two-wheel family SUV. The other bikes were all long tails, and this is the first bakfiets she ran through the paces.

Although it was just a short test ride, Jessica said she thought the front loader handling was more responsive than the Yuba and Xtracycle long-tails she had  tried. Her only complaint was the handlebar did bump Everett’s head when turning. Everett said he liked being in front in the Virtue better than being in the back on the other cargo bikes, but after a trip down pot-hole filled Humboldt Avenue, he said the wooden seat needed some padding! 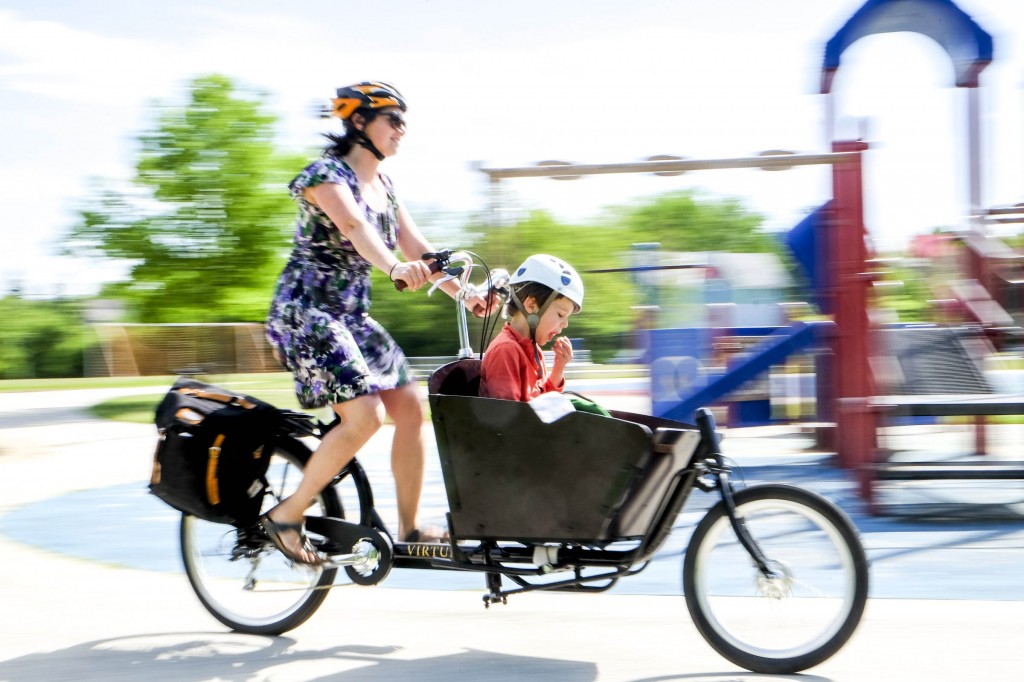 Everett gets to snack, while mom pilots him home after school.

Conclusion: For about $1,000, the Virtue Gondoliere is the first truly affordable bakfiets-style cargo bike sold in the US market. You can’t touch most others, like the Larry Vs. Harry Bullitt so popular with the couriers or the Workcycles Bakfiets for less than $2,800. While the bike specs are pretty low-end, everything from the Shimano 7-speed freewheel drivertrain to the Joy Tech roller-cam drum brakes performed well for me. If I could stifle my inner bike snob, forget about the entry-level components, and just pedal, I really enjoyed the ride.

Truly Spoken Cycles in Milwaukee’s Riverwest neighborhood is the only Wisconsin dealer for the Virtue (or any other bakfiets actually), and they also have their three-wheeled cargo trike, the Virtue Schoolbus, in stock for you to try. A Yuba dealer, you can compare the traditional Dutch-style cargo bikes to the long tails that are more popular so far in the US.

One thought on “Bike Czar: The Virtue Gondoliere Can Haul Lots of Cargo”