Looking at the impact of efforts to combat global warming.

The federal Environmental Protection Agency has released new regulations to reduce emissions of gases related to global warming. Is this needed, and what will be the effect on the US and Wisconsin economies, on global warming, and on Wisconsin’s ability to take advantage of these changes? Let us consider the data. 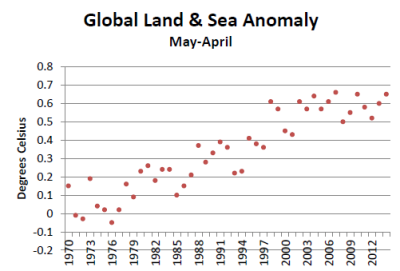 1. How real is global warming?

A small industry has formed around denying what has been found on the effect of human activities on global warming. A May 21 opinion column in the Milwaukee Journal Sentinel titled “A power grab by political con artists” is a typical example of the genre:

As is typical, the article neither shows the temperature record nor tells the reader where to find it. The chart above shows the temperature “anomaly”—the difference between the actual temperature and the average long-term temperature–since 1970 for years running from May to the following April. The last point on the chart includes the most recent winter. Despite our experience in Wisconsin, globally the past winter was one of the warmest on record. 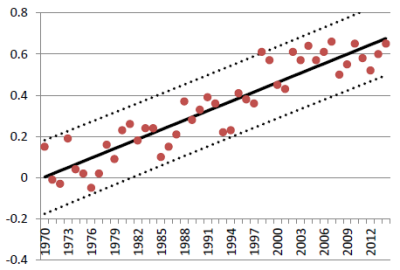 The next chart shows the same data as a statistician might analyze them, using linear regression. The fit, shown by the solid line, is pretty good, explaining 85 percent of the variation in the weather. The temperature record shows year-to-year fluctuations around an upward trend line.

The dotted lines are the upper and lower (95 percent of forecast) limits. Note that the value for 1998 falls just above the upper limit. When the opinion piece refers to the Clinton administration it presumably means 1998. In 1998 the odds of a temperature anomaly that was at least .6 above the long-term average was around out one in 40. Today the odds are at lease one in two or 50 percent. 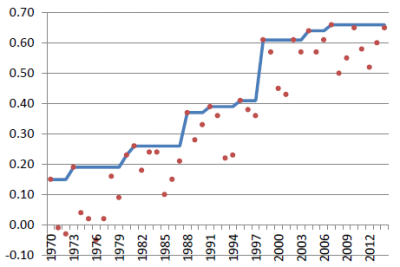 Climate deniers seem to take a novel approach to statistical analysis. Rather than estimate the mean values, they connect the extreme values, the hottest years so far, as shown in the next chart. Because 1998 was so hot, the line after that date is mostly flat, allowing global warming deniers to argue that warming stopped.

Another approach deniers take is claiming the theory is controversial among scientists. Yet there is considerable evidence to the contrary. For instance, a study of peer reviewed articles on climate change found that 97% of those expressing a position on the consensus position that humans are causing global warming endorsed it.

2. Will the EPA proposal cripple the US economy?

Shortly before the proposal was released, the US Chamber of Commerce issued a report entitled Energy Institute Report Finds That Potential New EPA Carbon Regulations Will Damage U.S. Economy.  Since the Chamber is a strong opponent of the regulations, one can safely assume that the report gives a worst-case scenario. Among other claims, it argues that a program to reduce carbon emissions would:

These numbers sound big until one compares them to the US economy. $51 billion is about 0.3% of the $17 trillion US GDP and represents about 1 month’s GDP growth. With current US jobs at 138 million in April, a loss of 224,000 is 0.16 percent of total employment or the amount of growth in about one month. Thus even taking the Chamber’s calculations at face value, the proposal would have a negligible effect on the US economy.

An opinion column from the Wisconsin Manufacturers and Commerce extends these claims to Wisconsin: “31,700 jobs will be lost in the five-state census region that includes Wisconsin.” Even though all five states currently lag national job growth, this loss represents less than two months of job growth for the region. To say this will cripple the five states is clearly a gross exaggeration.

3. Is US action futile because other nations will not follow suit?

It’s certainly true that effectively addressing climate change requires international action. Recently China replaced the United States as the leading producer of carbon dioxide, in part because of the switch from coal to natural gas that is already taking place in the U.S. But China and India can argue the U.S. does far more damage on a per capita basis. It seems reasonable to expect American influence on other countries will be greater if it is a leader rather than a laggard in reducing emissions. Countries refusing to reduce their carbon emissions could find their products subject to “carbon tariffs” aimed at equalizing the burden on domestic manufacturers (http://papers.ssrn.com/sol3/papers.cfm?abstract_id=2026879)

In the unfortunate event that some countries still refuse to adopt reforms, Americans will still reap the benefits of the cleaner environment — and more modern economy —  that will result from a switch from coal to natural gas, more solar and wind energy, and increased conservation.

4. Are the proposed rules a threat or an opportunity for Wisconsin’s economy?

In the search for explanations for Wisconsin’s recent poor economic performance I am struck by how similar the results are across the region. Here are examples:

A pattern like this suggests that the Wisconsin problem is a regional problem. Thus it is useful to ask what these states have in common besides cold weather. One answer is that for much of the 20th century Great Lakes states were the manufacturing powerhouse of the nation. But in a globalizing economy manufacturers whose success was based primarily on low costs moved elsewhere. Mass production of commodity goods is unlikely to return to Wisconsin or the Midwest.

Yet nostalgia for the old economy still drives much Wisconsin decision-making and probably that of its neighbors. This shows up in Wisconsin’s tax policy, which favors manufacturing and is a factor in high residential tax rates. It clearly comes through in the concern from the WMC that higher electricity rates will drive out manufacturers.

What is missing from both state policy and the state’s major business group is a strategy for Wisconsin to take advantage of the changes that will result from the new regulations. The EPA’s proposals will be a boon for firms developing new energy sources and those offering ways to conserve energy. In a free market, firms will arise to take advantage of these opportunities. But will they be from Wisconsin?

Though there is no reliable model to predict where economic development will occur, one factor is certainly the role of startup companies offering new kinds of products. This came home to me in the early 1980s when I stated a firm to sell software for the first personal computers. It turned out that far more of our customers were in California than Wisconsin. After discouraging visits to Wisconsin retailers, I was amazed when I visited a computer fair in San Francisco and quickly sold all my stock. It should not be surprising that this company (after a subsequent consolidation) was ultimately based in California.

The point is that there is often a real advantage for entrepreneurs to be located close to a market that wants these new products. If successful locally these firms expand to additional markets. States in the West and the Northeast have already formed cap and trade consortia. Will Wisconsin? Will it support new wind and solar companies rather than continuing to emphasize the importation of gas and coal? The challenge for Wisconsin and other Great Lakes states is whether to let demands to protect the old economy strangle the opportunity to encourage a new generation of innovative firms.