Aurora Health Care CEO Nick Turkal runs the largest health care system in the state of Wisconsin, with over $4 billion in annual revenue and some 25,000 employees. Trained as a doctor, he rose to his current position after holding various joint appointments with Aurora and the University of Wisconsin School of Medicine.

He is the latest House Confidential honoree to live on a border, in this case the southern edge of the Village of Whitefish Bay, where it abuts the Village of Shorewood. Others include Ald. Jim Bohl and William Ryan Drew, Milwaukeeans on the edge of Wauwatosa.

Turkal and his wife Kathleen Turkal live in an economical 9 room, 4,411 square foot home that cost $38,000 when it was constructed in 1946 on land owned by Madison A. Constant in the Pillsbury subdivision on the shores of Lake Michigan.

It served as the residence of Harold E. and Esther Constant, and is listed in the Whitefish Bay Architectural and Historic Inventory as an “exemplary local example of a residence designed in the Spanish Colonial style.” However, any Toledo in the architecture is more of the Ohio variety than the Spanish sort. It was designed by Milwaukee architect George F. Spinti, who had built the Colonial Revival bathhouse at Gordon Park  six years earlier.

Today the home is valued at $1,902,500. This is considered “economical,” since that sum represents well less than one year’s salary for Turkal. (He spent another year’s salary on a home on 100 feet of Beaver Lake shoreline in 2013.)

He is not the first physician – educator to live in the home, as it was once the residence of Dr. Carl Eberbach, former chairman on Marquette University Medical School Department of Surgery (now the Medical College of Wisconsin) where he served from 1950 – 1958. Eberbach is memorialized in an annual speech for visiting professors at the college to this day. His “monograph on renal tuberculosis was considered an an outstanding work,” it has been said, and who are we to disagree.

Turkal is too busy running an expanding medical system to do too much monographing like his predecessor at the home, and his outfit recently partnered with a Tennessee firm to consider further expansions, acquisitions and the like.

Regrettably, however, Mrs. Vogel had difficulties with her neighbor across the border in Shorewood. In 1980 she had her attorney, Roger Minahan, draft a letter to the neighboring property owner, Peter J. Kondos, enjoining him from allowing any fill to be deposited upon any portion of her property adjoining his. The nerve of those Shorewood people!

Kondos, a quirky attorney, had used his  6-bedroom, 6,000 square foot property as storage, and it was severely neglected by all accounts. The home was sold in foreclosure in 2011, a rarity for a home of such size and prominence.

But back to our featured home. Before the Turkals bought the joint in 2007, for $1.5 million, it had been the home of Verne and wife Marion Chester Read. For many years Verne was president of the Chester family’s department store, T.A. Chapman, now defunct. The Reads added that $1.5 million payment for their home to their many other millions and moved into St. John’s on the Lake, where Mrs. Read remains after the 2011 death of her husband.

And so Milwaukee’s old royalty, the likes of the Chesters and Vogels, was succeeded by the newly wealthy. The Turkals purchased the lovely stone home and put some new mechanical systems, but nothing about the new residence gave them quite such a problem as the matter of their dog fence, which exceeded village height standards by a half-a-foot.

The Turkals wanted a 4 foot high fence “due to coyote concerns.” Don’t you love the suburbs!

Nick Turkal, MD, graduated from Creighton University School of Medicine in 1982, followed by a residency in Family Medicine. His background included rural private practice, before he began working on joint appointments at the University of Wisconsin Medical School and Aurora Health Care.  For the UW school, Turkal served as a Clinician Educator, Residency Director (1990-1994), Department Chair (1994-1996), and Associate Dean for the Milwaukee Campus (1996-2000). Meanwhile, he held various leadership positions with Aurora since 1987, before becoming its chief executive in 2007.

Turkal is among a new breed of medical care executives who have arisen in the last 25 years to become wealthy running these ever larger non-profits. Turkal salary was $2.1 million 2011,  down from the $2.7 million he made in 2010, but far more than the $857, 555 paid to Mark Taylor, chief executive of Columbia St. Mary’s. The U.S. Senate has held hearings questioning the escalation of salaries for hospitals and other tax-exempt charitable organizations. Critics have charged that Aurora has overbuilt facilities in order to drive out competitors, and that this has helped push up the costs of medical care in Wisconsin, which in some years has led the Midwest in health care cost increases.

Aurora is a charity that can collect donations, yet often operates more as a for-profit concerned about driving profits. Aurora recently agreed to pay $340,000 to settle a state lawsuit against it for improperly disposing of pharmaceutical hazardous waste from at least 2006 until 2010.

But Aurora is a state leader in health care trends and Turkal served as chair-elect and chair of the Wisconsin Hospital Association in 2010 and 2011.

In his spare time, Dr. Turkal tries to run six days each week, no doubt inspired by the nearby lake shore.

How Milwaukee Is It? The residence is 5 miles from City Hall. 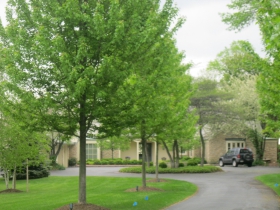