Wisconsin has had less success reducing unemployment than surrounding states. Why?

By now, it is clear Wisconsin will fall far short of the 250,000 new private sector jobs promised by Governor Scott Walker during his campaign for the governorship. As of April, the increase is around 113,000.  If Wisconsin’s private sector jobs increase at the average rate of the past twelve months the state will fall about 100,000 short of the goal. 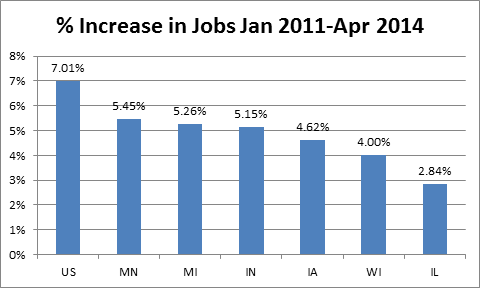 An argument can be made that the promise was never realistic–that a better measure of success would be to compare Wisconsin with the average state, particularly neighboring states. But here, too, Wisconsin falls short. As can be seen in the first graph, Wisconsin’s job growth of 4 percent falls well below the U.S. increase of about 7 percent and below all but one neighboring state — Illinois. That state’s economic difficulties are generally blamed on its public pension problems; Wisconsin, by contrast, is considered one of the best funded pension systems. 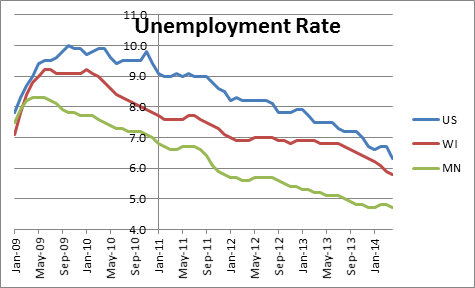 There has been remarkably little discussion either by the governor or by advocates of his policies of Wisconsin’s disappointing jobs performance or possible reasons behind it. Instead they continue to claim Walker’s policies are a great success. Lacking a discussion from the governor, I turned to the conservative-oriented Wisconsin web sites. There are a large number of such sites, but most seem much more interested in producing debating points than serious research and analysis. Two seemed most promising:

The other conservative web sites were even less productive. Apparently there is a consensus that the way to deal with bad news is to avoid talking about it, rather than face it and learn from it. 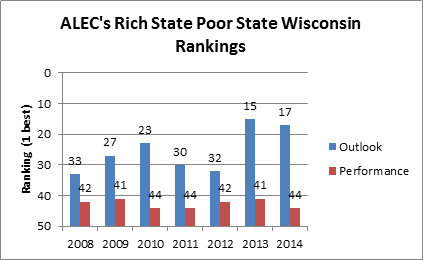 In the 2014 report, the news was not so good. Wisconsin fell backwards on both rankings. So MacIver simply let this update pass without comment. It seems likely that the apparent improvement in the 2013 Performance ranking that stirred MacIver’s enthusiasm was simply statistical noise. Why the improved Outlook rank didn’t lead to improved Performance is another topic unaddressed.

Thirty years ago, conservative think tanks did some actual thinking, notably about ways to use market forces to attack society’s problems. Several of their ideas have since gone mainstream, including the use of pollution taxes and an individual mandate to overcome adverse selection in the health insurance market. But recently these think tanks have fallen on hard times intellectually even as they prospered financially.

Models explaining how things work are useful things for imposing some order on an often chaotic and complex reality. But it is way too easy for interesting models to turn into rigid ideologies, immune to evidence or testing. Nowhere is this more evident than in the reaction—or rather the lack of reaction–to the poor employment results in Wisconsin.

One thought on “Data Wonk: Walker’s Record on Unemployment”