The Wisconsin Center District released an anticipated draft proposal Wednesday of a plan to expand the convention center.

The report, entitled, “Market & Feasibility Analysis Wisconsin Center Expansion May 14, 2014,” includes the interesting suggestion that a planned expansion could be coordinated with the construction of what the WCD calls “a new “events center,”  or what we call a new basketball arena.

“This district could attract private investment with the inclusion of residential, commercial, and retail development. This mixed-use district could become a hub for entertainment activity in Milwaukee used by residents and visitors alike.”

The WCD plan would retain the U.S. Cellular Arena and the Milwaukee Theater, which it owns, while expanding the convention center north to vacant land held by the district for that purpose. The “Event Center” would be a block north of the existing Bradley Center, which would be replaced with a “High Riser Residential and Retail Podium,” and “Office and Retail Complex,” both taxable uses.

The specter of private investment in tax-producing properties near a publicly-subsidized development is often an alluring one to politicians. Even if these private investments fail to materialize, or if they ultimately cannibalize other entertainment districts, they add a distraction from a call for public financing of the desired new facilities.

And the call could come for more money from the WCD’s tax funds, which come from 4 sources:

–The taxes total about $27 million for 2013, with the revenue pledged to debt service, which is about $17 million. The excess revenue goes to fund Visit Milwaukee (although there are plans to merge this organization with the WCD) and to fund an annual operational deficit of about $5 million.

The proposed expansion would increase beverage and rental revenue — along with associated costs. But it should reduce the operating subsidy from the current $4.9 million to $2.2 million.

“The WCD does not have sufficient excess capacity to [incur] additional debt services,” the consultant notes.

“Clearly, new sources of revenue will be necessary to finance the proposed expansion.”

The curious thing about the WCD’s big plans is it meanwhile is greatly lacking in leadership. One third of the seats on it 15-member board are either vacant, held by unqualified individuals, or held by persons whose terms have expired, as I’ve previously reported. It’s agenda is clearly driven by longtime board chairman, Atty. Franklyn Gimbel, once dubbed “Mr. Clout,” even though his appointment expired nearly two years ago. And its President & CEO Richard Geyer has retired.  Since Gimbel holds the board post appointed by the governor, this puts Gov. Scott Walker in a position to hold some power over the future of the WCD. 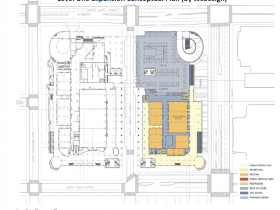 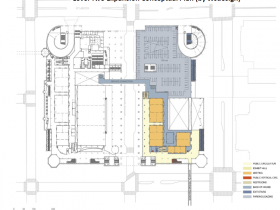 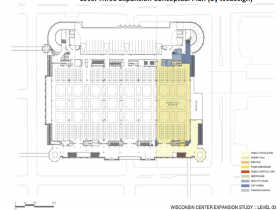 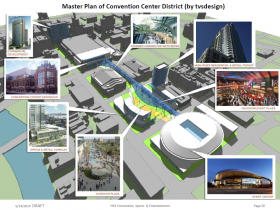 Meanwhile, On the Arena Front 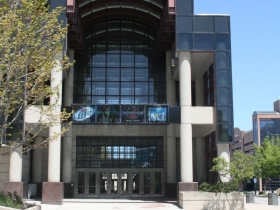 The Milwaukee Metropolitan Association of Commerce is the agency spearheading the quest for a new arena, cultural and entertainment facilities with its 48-member Cultural and Entertainment Capital Needs Task Force. MMAC President Tim Sheehy told members of the Milwaukee Common Council that the work was just beginning, likening it to the early stages of a basketball game — in the moments immediately after the national anthem has been sung.

His cause has raised $19 million in private and corporate pledges and received a promise of $200 million more toward the construction of the new facility as gifts from Herb Kohl, the former owner of the Milwaukee Bucks, and from the team’s new owners, Marc Lasry and Wesley Edens, so that’s a start.

Among other options, the MMAC group is considering creation of a “Super TIF” to funnel tax revenues toward construction of the arena.

Probably one thing subject to change would be the corporate structure of the new arena. The current Bradley Center Sports and Entertainment Corporation  owns and operates the arena where the Milwaukee Bucks currently play.

It is governed by a nine-member board of Wisconsin residents appointed by the Governor.  No member may hold elective office.

The governor gets to nominate six members, with Senate consent, “who represent the diverse interests of the people of this state. Three of these nominees shall have executive and managerial business experience and all shall be residents of this state.”

The other three members, believe it or not, are “nominees of the Bradley Family Foundation, Inc.”

The Bradley Family Foundation got its seats since the current arena was built as a gift of Jane Bradley Pettit, and the corporation was established under state law to control it. The provision sounds like something longtime Bradley family attorney Joe Tierney slipped into the deal when the family donated the arena.

You can imagine the last thing Messrs. Lasry and Edens expected when they bought the team was that a private family would have the right to name three of the representatives of the landlord, and it would seem difficult to create a new arena with such governance at hand.

As Bruce Murphy wrote in “Secrets of the Bradley Center” in 2001, “the [corporation’s] goal is ‘to remain an independent organization reflecting the gift of Jane Pettit in honor of her father.’ That goal will be tested as the Bradley Center negotiates to join forces with the Wisconsin Center.”

Still, if any plans for a new arena, like the convention center district’s plans for a new exhibit hall, include the sale and reuse of the Bradley Center, the corporation board must be consulted.

And, sorry, their hands are tied.

According to state law chapter 223, which governs the governance of the Bradley Center, “The corporation may not … Sell, exchange or otherwise divest itself of the Bradley center.”

Well, that sounds like a trick. Why not just dissolve, wind up its affairs and “join forces with the Wisconsin Center,” as Murphy suggested in 2001?

“[The Corporation may not …] Dissolve and wind up its affairs, unless the legislature enacts a law ordering dissolution.”

So, on top of everything else, it looks like the Legislature, which seldom looks with favor upon Milwaukee, will have a say on the disposition of the current arena. Well, we’re done singing the National Anthem. It’s time to play ball. Judging from what we’ve seen from the Wisconsin Center District, the NBA demand for a new arena as a condition of the sale of the Bucks, and the other capital needs identified in a $1 billion plan by the Public Policy Forum, this game will be hardball, whatever the sport.

Here are the current members of the Bradley Center Corporation board:

Marc Marotta, a Foley & Lardner partner, was the principal speaker when the sale of the Bucks was announced. He is a House Confidential honoree.

Michael Grebe, a retired Foley and Lardner partner, is the President and Chief Executive Officer of the Lynde and Harry Bradley Foundation, which is related to, but not to be confused with the Bradley Family Foundation. He has had a long association with Governor Scott Walker.

Jeff Joerres, who stepped down as CEO of Milwaukee-based Manpower Group this month, was appointed to the board by the governor in February. Like Marotta, he is a House Confidential honoree.

Ted Kellner is CEO of Fiduciary Management, an investment firm in Milwaukee. Rod Stewart played at his birthday party at the Milwaukee Theater.

Patrick Lawton is the Director of Fixed Income Capital Markets and is on the Executive Committee of Robert W. Baird & Co.

Matthew Parlow is Associate Dean for Academic Affairs and Professor of Law at Marquette University, where he teaches Property, Land Use, Legislation, Urban Redevelopment, and Professional Sports Law, all handy things when one has an arena to build. [His co-professor of the sports law class is Bud Selig.] Parlow is also on the MMAC arena task force.

Andrew Petzold is CEO of Concord Development Company of Mequon.

Michael Spector is a retired partner with Quarles & Brady.

Joe Sweeney is a Strategic Advisor with Corporate Financial Advisors and was former president of the Wisconsin Sports Authority.